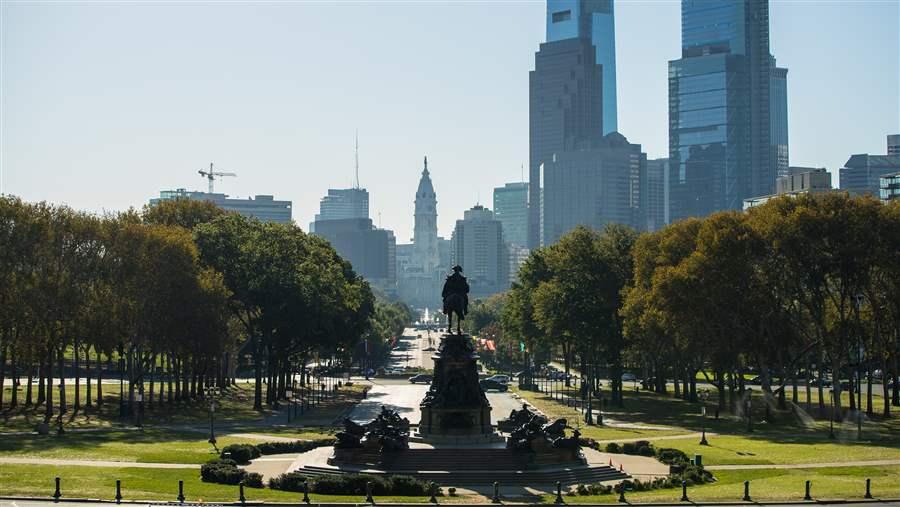 In 2018, the key gauges of Philadelphia’s overall well-being fall into a clear-cut pattern, more than at other times in the city’s recent history: The economic indicators are mostly positive, the social measures considerably less so.

On the economic front, the city had a monthly average of 715,900 jobs in 2017, an increase of more than 16,000 from the year before and the highest total since 1991. For the second year in a row, Philadelphia added jobs at a faster rate than did the nation as a whole.

The average local unemployment rate for the year fell to 6.2 percent and was dropping further as the year ended, although it remained higher than the national and regional figures.

Home sales in Philadelphia increased for the sixth consecutive year, reaching a level in 2017 just short of the number recorded in the housing boom that preceded the Great Recession. The year-over-year increase of nearly 3,000 was the largest since 2005.

Construction flourished as well. The number of residential housing units for which the city issued building permits topped 3,000 for the fourth consecutive year. At 3,389, the 2017 figure was off 15 percent from the peak in 2014 but was still high by historical standards.

But on the social side of the ledger, the numbers were far more sobering.

In 2017, an estimated 1,200 people died of drug overdoses, mostly related to opioid misuse, giving Philadelphia one of the highest drug death rates of any place in the country. By way of comparison, the city’s annual death toll from the AIDS epidemic peaked at 935 in the mid-1990s.

Another 317 people were victims of homicide. While the total was lower than in most of the past 50 years—and the city’s homicide rate was far below those in Baltimore, Detroit, and Cleveland—the number was the highest since 2012 and marked an increase of 14 percent in a single year.

Even with more jobs and lower unemployment, the poverty rate stood at nearly 26 percent, and Philadelphia retained its title as the poorest of America’s 10 most populous cities. Nearly half of the city’s 400,000 poor residents were living in deep poverty. For one adult with two children, that meant an income of less than $10,000, which is 50 percent of the federal poverty threshold.

In addition to the mostly positive economic numbers and the more downbeat social ones, other data simply document the ongoing changes that have been transforming Philadelphia—sometimes rapidly, sometimes gradually—for a decade or more.

The city’s population rose for the 11th straight year, although the annual increase was smaller than in the early stages of the growth spurt. The cumulative rise—92,153, or about 6 percent over the 2006-17 period—has been modest compared with those in New York, Boston, and Washington but still significant after more than half a century of local population decline.

That population growth has largely been fueled by an influx of immigrants, whose presence has increased steadily over the past 25 years. They accounted for nearly 15 percent of the city head count in the most recent census, the greatest share since 1940.

While the percentage of Philadelphians with bachelor’s degrees remains below the national average, it moved upward to nearly 29 percent. The rise was fueled by 25- to 34-year-olds, 44 percent of whom had degrees, an increase of 14 percentage points from a decade earlier and 9 points higher than the nationwide figure for that age group.

Enrollment in Philadelphia’s district-run schools fell by 1 percent in 2017-18, continuing its gradual, long-term decline. The head count in the Catholic schools dropped slightly as well, while the number of students in charter schools, particularly cybercharters, continued to grow.

These economic, social, and demographic data tell us that in 2018, Philadelphia has many reasons to be proud of its recent performance—and not just on the football field. But the numbers also indicate that the city faces a set of fundamental challenges, some old and some new, that are reason for deep concern. 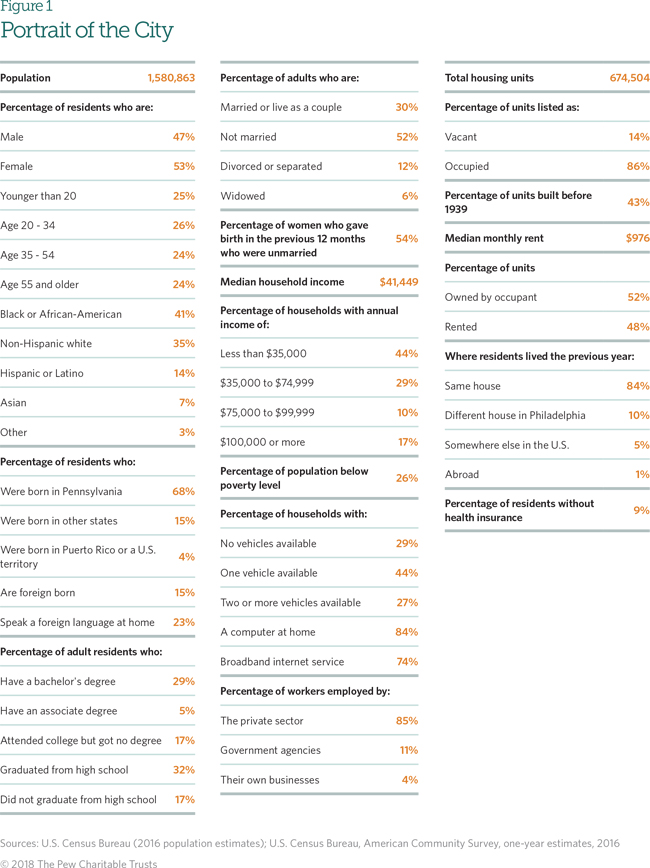 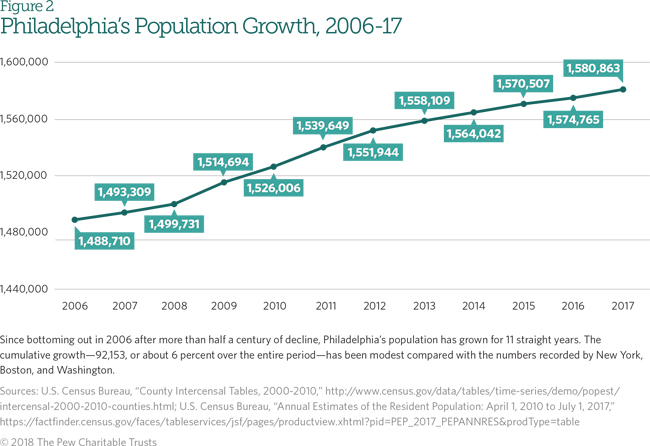 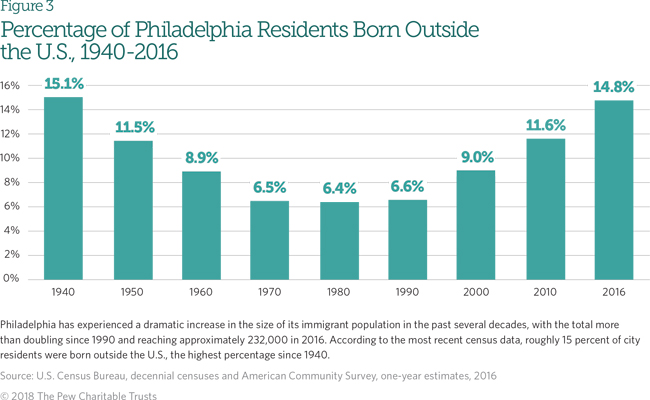 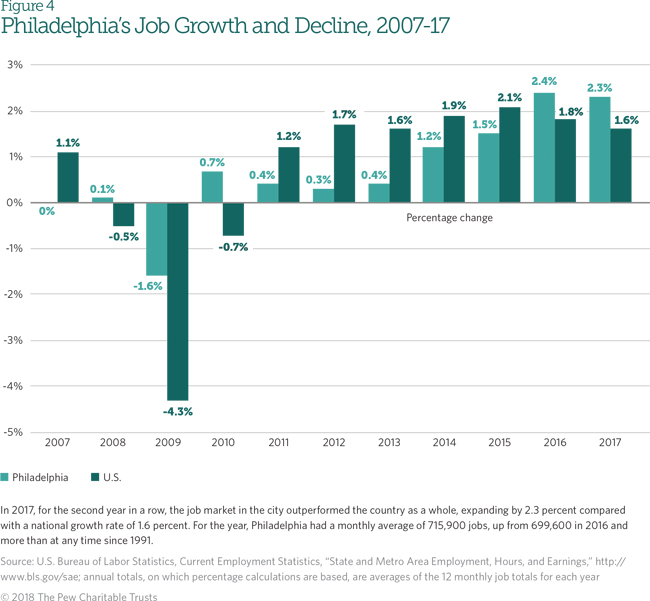 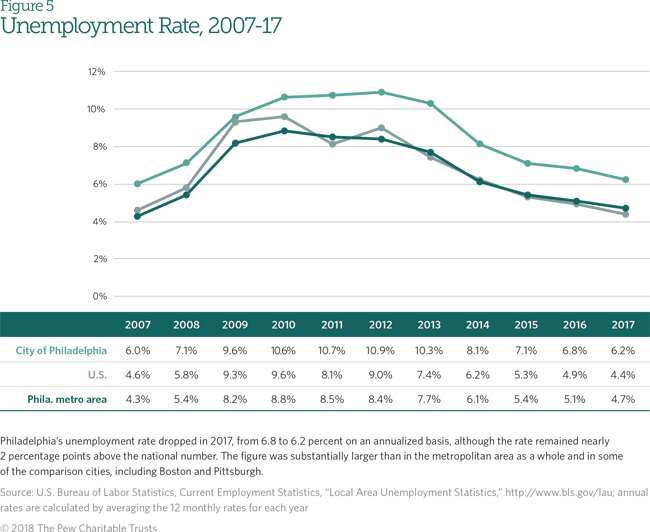 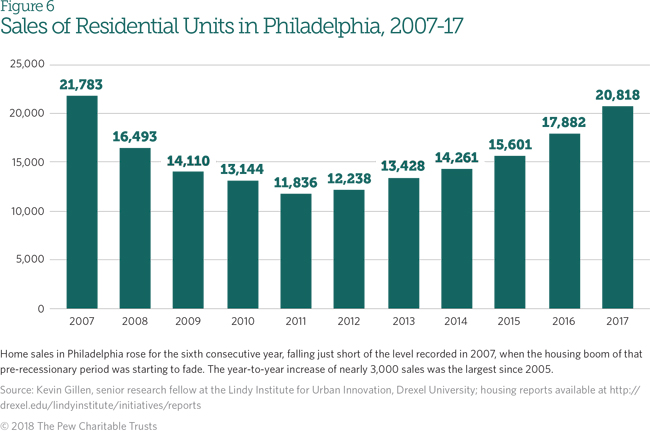 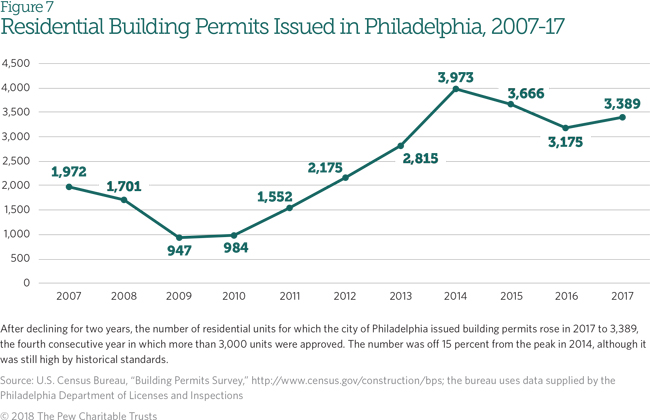 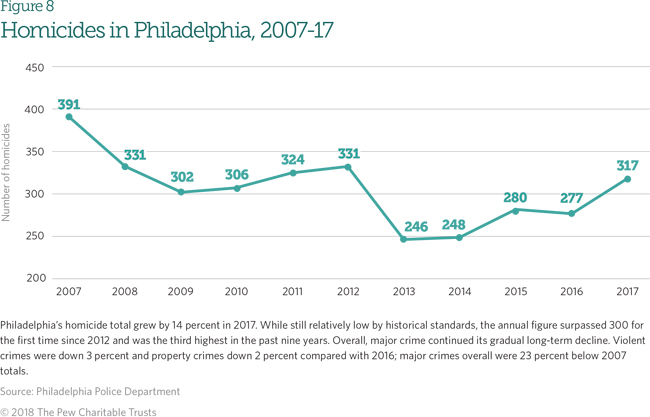 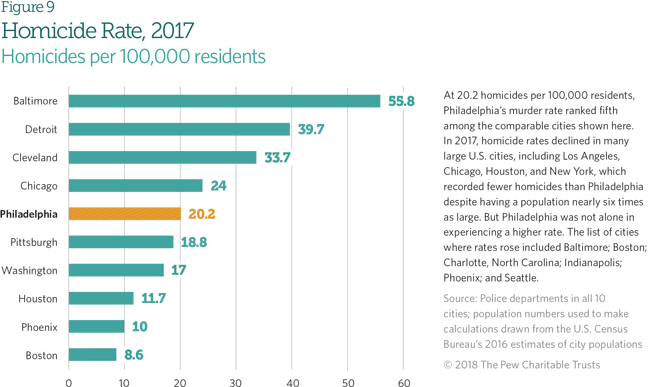 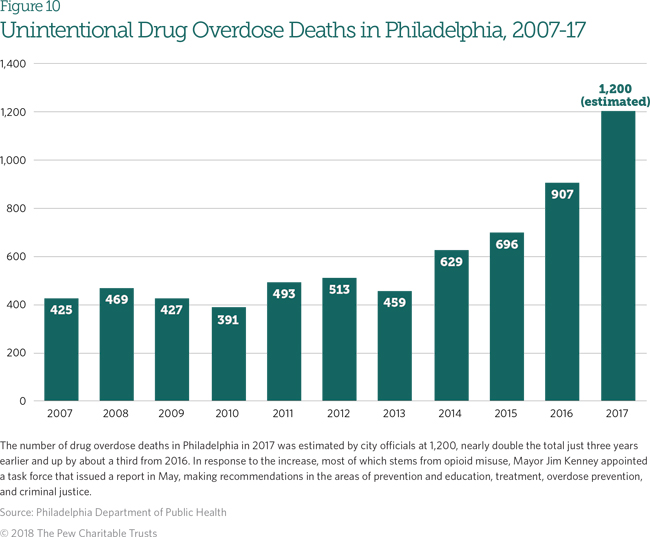 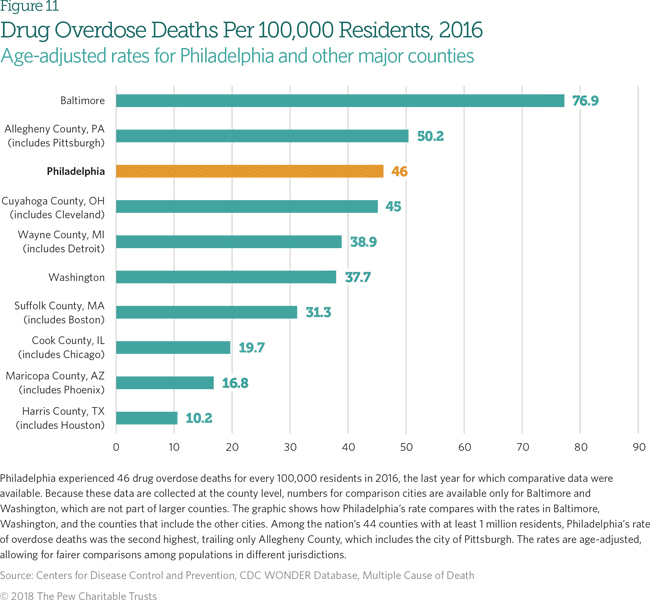 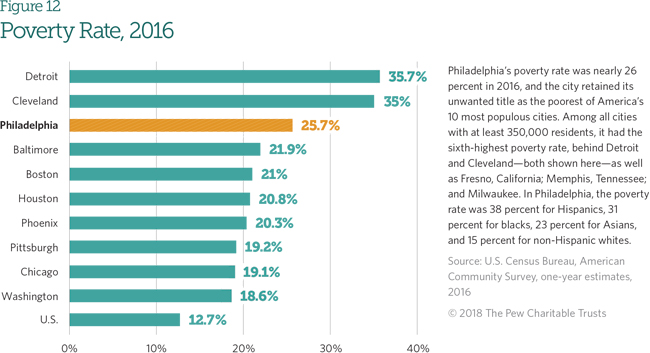 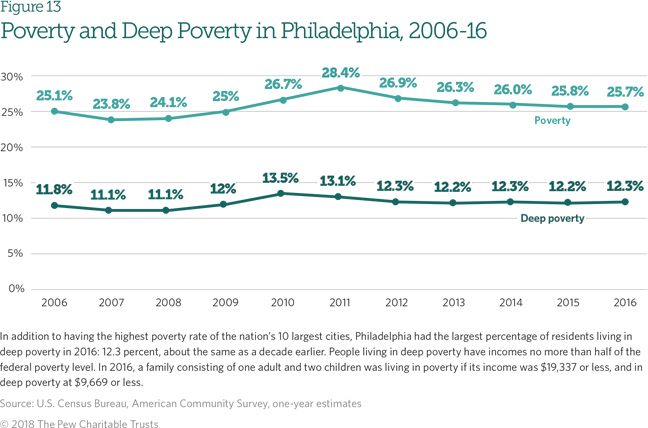 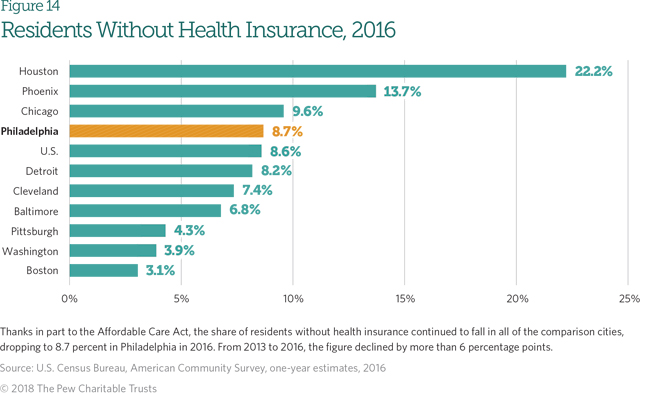 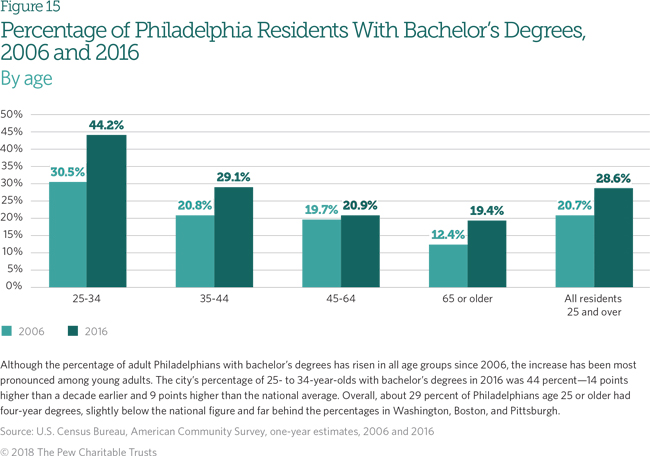 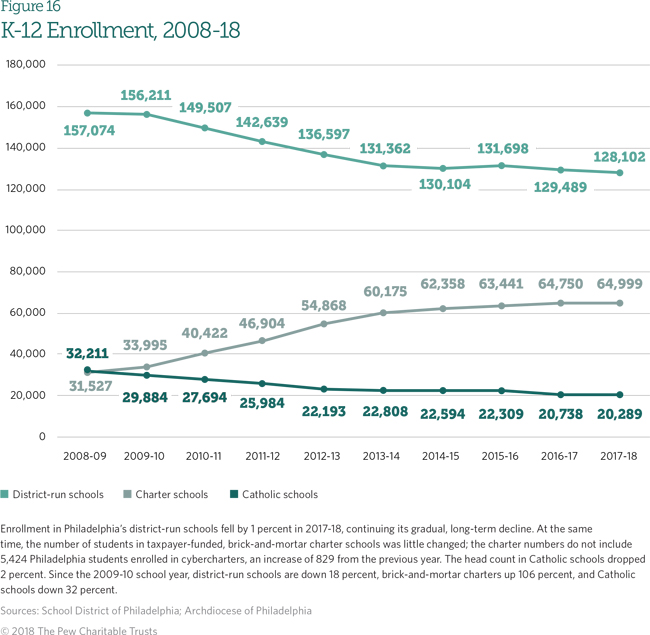 By many measures, as indicated in The Pew Charitable Trusts&rsquo; 2018 &ldquo;State of the City&rdquo; report, scheduled for release in early April, Philadelphia is on an upward trend, with an increasing population, strong job growth, and a vibrant arts and culture scene. But the city is also facing one of the highest drug overdose rates in the nation, fueled predominantly by an intensifying opioid crisis.

In 2016, figure outpaced all but 1 of 44 largest counties, reflecting opioids’ impact

Philadelphia had the second-highest rate of drug overdose deaths in 2016 among the nation&rsquo;s 44 counties with over 1 million residents: 46 per 100,000 residents, with most attributed to the misuse of opioids. Only Allegheny County, which includes the city of Pittsburgh, had a higher rate.