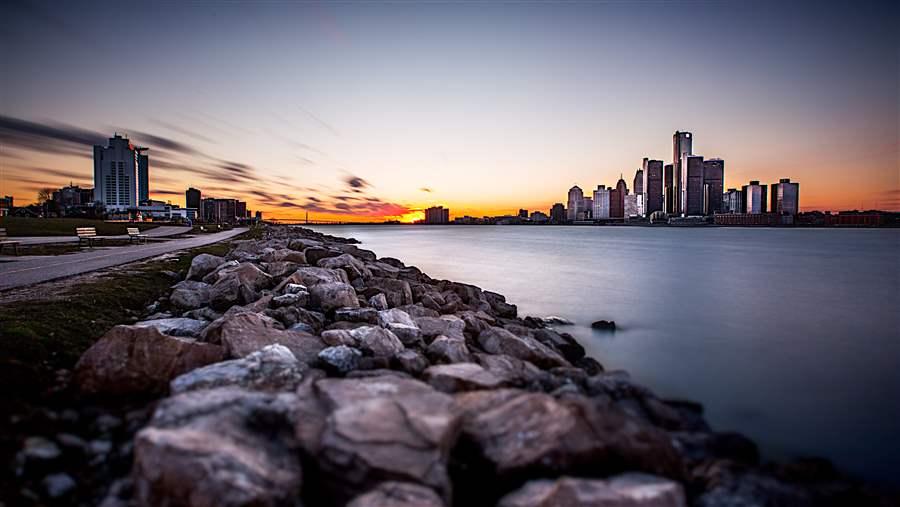 In July 2013, facing an estimated $18 billion in debt, Detroit became the largest U.S. city ever to file for federal bankruptcy protection. No other local or county government filing had come close to this level of debt. Sixteen months later, a federal court approved a deal, known as the plan of adjustment (POA), to allow the city to emerge from bankruptcy. The POA, negotiated by the city and its creditors, required Detroit to make significant changes to address its financial obligations—of which unfunded pension and retiree health care liabilities accounted for about 40 percent—and to develop a feasible approach toward long-term fiscal soundness.

This report summarizes the key pension-related provisions of Detroit’s POA and includes an examination of the city’s pension funding trajectory. The agreement froze the city’s two existing pension plans, created two new plans for current and future workers, temporarily reduced city pension contributions until 2024 to provide Detroit with some budget relief, and established new governance structures to oversee the two systems. Since the POA took effect, city officials have established a dedicated trust fund to help pay for the expected rise in pension costs that will follow the transition period and have recommended a long-term funding policy for the legacy pensions beyond 2023.

The analysis finds that the contribution policies proposed for the city’s legacy pension liabilities are likely to be sufficient to pay promised benefits if plan investment returns meet current assumptions. Still, the city faces significant budget planning challenges caused primarily by persistent, long-term negative operating cash flow— attributable mostly to benefit payments outpacing available assets—for the two frozen legacy plans, and the potential for unexpected costs for the two new plans for current and future employees. The prospects of such challenges and the possibility of unexpected costs require close attention.

The report also includes recommendations for further steps that Detroit can take to help policymakers evaluate the long-term outlook for the city’s pension financing while working to keep budgets balanced and develop a clear path toward fiscal solvency.

The analysis concludes that Detroit officials should:

Although the scale of Detroit’s bankruptcy is unique, officials in cities and states across the country grappling with similar, if less acute, fiscal challenges can apply the lessons of the city’s experience. Detroit’s funding choices for its two legacy plans—both for the short and long terms—offer helpful insights for jurisdictions that have implemented new pension plans for recent hires while working to keep promises to longtime workers.

The Pew Charitable Trusts’ research and analysis are based on publicly available documents, including valuations, studies commissioned by the city, audit and annual reports, and biannual financial reports published by the state-appointed Financial Review Commission. In addition, researchers used valuation information for other states and cities for purposes of comparison, and actuarial projections of pension liabilities and costs using a sophisticated simulation model and standard actuarial methods. The financial and actuarial analysis is designed to complement and augment the work done by the actuarial firm retained by the city. Pew uses metrics for fiscal sustainability and structural budget balance to evaluate different funding policies as opposed to providing a funding policy recommendation. The projections and analyses included in this report are substantially consistent with projections produced by the pension plans’ actuaries and are based on the plans’ assumptions and financials to date. Actual results may vary over time, based on experience.