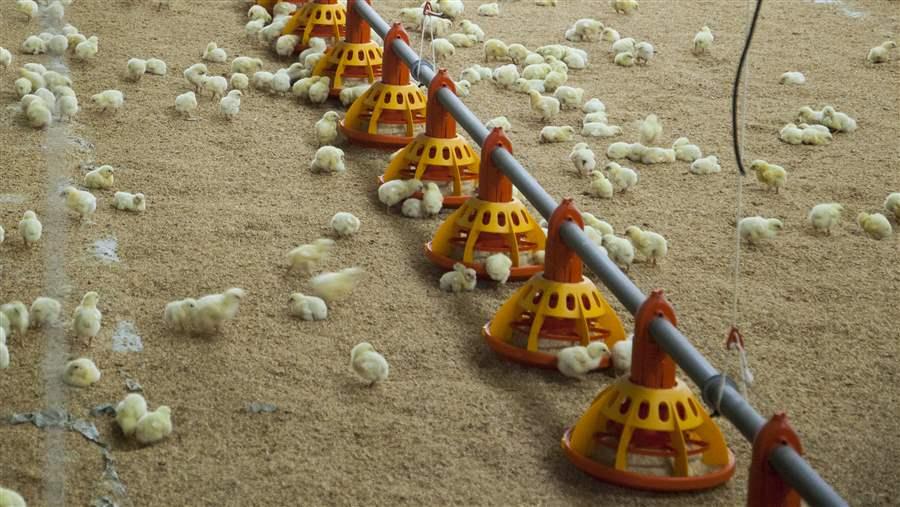 Editor's note: This report examines potential strategies that can be implemented on farms and feedlots to reduce the risk of human illnesses caused by pathogens in meat and poultry. A separate report provides an overview of non-antibiotic alternative products that are available to reduce the need for antibiotics in animal agriculture.

Contaminated meat and poultry products are responsible for an estimated 2 million illnesses in the United States each year, and amount to more than 40 percent of all bacterial foodborne diseases. The annual cost of illnesses—for instance, direct medical costs, lost income, and productivity—attributable to consumption of these foods has been estimated at about $2.5 billion for poultry, $1.9 billion for pork, and $1.4 billion for beef.

Livestock species often harbor foodborne pathogens. Infected animals may or may not show signs of infection, which can make it challenging to identify them. Depending on the pathogen involved, meat from infected animals may, in rare cases, already be contaminated with the pathogen before slaughter. More often, however, foodborne pathogens are restricted to the gastrointestinal tract of animals but are not present in the muscles, the main component of edible meat. Contamination of meat most commonly occurs during or after slaughter through contact with fecal material, animal hides, gastrointestinal content, lymph nodes, or the slaughter environment.

While certain interventions and management practices during and after harvest can reduce contamination risks, many food safety experts suggest that to better protect public health, the U.S. needs a comprehensive approach to meat and poultry safety that begins at the farm level.

The Pew Charitable Trusts examined food safety control measures currently used on farms and feedlots or that might be employed in the future. This report assesses pre-harvest interventions aimed at reducing the level of the major foodborne pathogens—Salmonella, Campylobacter, and Escherichia coli (E. coli) O157:H7—that can lead to the contamination of meat from poultry, swine, and cattle. These pathogens are included in this examination because they account for a substantial proportion of infections linked to meat and poultry consumption, and research on pre-harvest interventions has focused primarily on them.

Identifying potential pre-harvest measures, however, is just a first step in effectively controlling food safety hazards and allowing further improvements to public health. While existing pre-harvest interventions can reduce pathogens to some extent, a comprehensive approach is necessary to significantly reduce contamination. This must include safety measures before, during, and after harvest—a true farm-to-fork approach.

Controlling pathogens at the farm level can help reduce human illnesses beyond meat and poultry products. Due to the risk of manure runoff and secondary contamination of downstream products, illnesses linked to the consumption of other food items, such as fresh produce or water, could also be reduced.

Ultimately, the impact of a particular intervention in reducing contamination will depend on how widely it is adopted and how effectively it is used. Each might not be cost-effective, practical, or even successful for every species, pathogen, and production system. Interventions have to be timed appropriately to allow maximum efficacy, and not all interventions are compatible with each other.

As discussed in detail in Appendix H, several countries have successful, comprehensive food safety control programs that include a strong pre-harvest component, often partnerships between government and the livestock industry, initiated using government appropriations and sustained with industry dollars. These programs are science- and risk-based, and periodically evaluated for efficacy and cost-effectiveness; they demonstrate that success requires substantial time and resource commitments, as well as teamwork and continuing buy-in from all stakeholders. They also show that success is possible and that the public health benefit can be substantial.

Adoption and implementation of on-farm control measures are, in many cases, hindered by economic challenges.

For example, although consumers may derive benefits from cattle being vaccinated against a potentially deadly foodborne pathogen, Shiga toxin-producing E. coli, the cow-calf operation that would have to make the investment may not be able to gain any direct benefit from the vaccination because the operation does not market the animals straight to consumers. In addition, companies that market animals to consumers may derive limited benefits from such vaccination because they are unlikely to promote the increased safety of their food to consumers, and regulatory challenges may be limitations rather than an expansion of technical and scientific knowledge.

This report provides a summary of pre-harvest interventions for use in poultry, cattle, and swine. Several appendices offer an in-depth analysis of the topics discussed here, providing the scientific support for the conclusions stated. Detailed information on the mode of action as well as the efficacy, benefits, and limitations of individual interventions for the different species and production systems are provided. These appendices also provide context for the role of pre-harvest food safety in the food chain and identify data gaps and areas for further research as well as highlight potential roadblocks to implementation. They also review successes achieved in other countries with pre-harvest interventions.

WASHINGTON&mdash;Wider use of evidence-based food safety interventions on farms and feedlots would significantly reduce the risk of people getting sick from contaminated meat and poultry, according to a report released today by The Pew Charitable Trusts. The report, &ldquo;Food Safety From Farm to Fork,&rdquo; examines potential means to prevent foodborne illnesses by investing in strategies to control Salmonella, E. coli, and other pathogens that live in and around food animals. Cattle, poultry, and swine often harbor these microorganisms before they reach the slaughterhouse gate, where the U.S. Department of Agriculture&rsquo;s oversight authority starts.