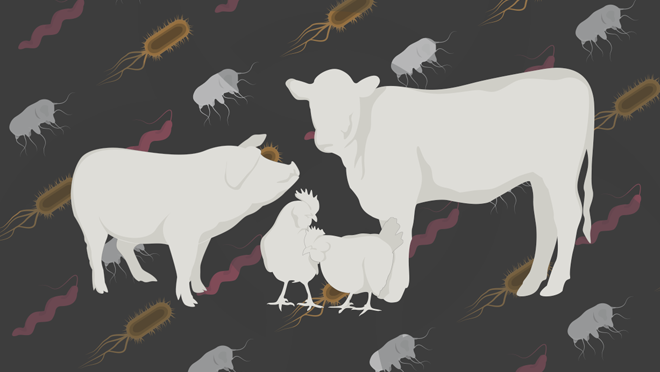 Meat and poultry are among the leading vehicles for foodborne illnesses around the world and are responsible for sickening more than 2 million Americans each year. The pathogens that cause these infections are typically zoonotic (meaning they can be transmitted between animals and humans) and can be introduced at any point along the food chain—from when the animal is raised, to the day of slaughter and beyond, up to the moment the meat or poultry product is consumed.

A significant number of pathogens can be transmitted to humans through meat and poultry, and the risks have changed over time. The public health threat posed by some pathogens has diminished, while others have persisted for decades. New, often more virulent strains of existing disease agents continue to emerge, along with previously unknown pathogens such as the Middle East respiratory syndrome coronavirus (MERS-CoV). When such truly new pathogens emerge in one part of the world, many questions remain initially unanswered, including how they are transmitted, which animal species they can infect, whether they may extend their geographic range, and whether transmission through meat and poultry may be possible. MERS-CoV, for instance, is currently emerging in camels and humans in the Middle East; what, if any, risk this virus may pose to the U.S. meat supply going forward is difficult to predict. Some emerging pathogens, such as E. coli O157:H7, have eventually developed into major food safety concerns. For others, such as the hepatitis E virus (HEV), the importance of exposure through meat is still uncertain. Given the dynamic properties of foodborne pathogens, one thing appears certain: New foodborne risks inevitably will develop.

Ensuring the continued safety of America’s meat and poultry supply requires an agile, adaptable system that is able to detect, assess, and control both emerging and established risks. Because the pathogens that may emerge in the future cannot be known today, that is the central challenge to building a strong food safety oversight system.

This study reviews microbial hazards and risks in the U.S. meat and poultry supply that have emerged, are emerging, or that evidence suggests may emerge in the future. The study’s goals are to identify factors that favor the occurrence of emerging pathogens (EPs) and pinpoint traits that EPs transmitted through meat and poultry may share; characterize the challenges these pose, be they scientific, technological, or regulatory; and determine mechanisms that might facilitate the expeditious detection, characterization, and control of such EPs.

The history of how microbial hazards have emerged as foodborne pathogens provides valuable lessons learned for the study of future disease emergence. For this reason, this report includes pathogens, such as Listeria monocytogenes or Yersinia enterocolitica, that have become widely established in the meat and poultry supply and are no longer typically thought of as emerging. Studying the history of their emergence provides useful insights about the detection, characterization, and control of EPs. The report also includes EPs that have the potential to emerge in meat and poultry in the future—because they have recently emerged in other parts of the world, for instance—even if questions remain about transmission through these food products. The EPs discussed in the report can be broadly divided into six categories:

These categories are more fully explained in the Background section.

Because many EPs have traits in common, this report begins with a general discussion of EPs, primarily those associated with meat and poultry, and then focuses on issues resulting from the emergence of five major foodborne pathogens for which considerable data are available: Campylobacter, pathogenic E. coli (Shiga toxin-producing E. coli [STEC] as well as antimicrobial-resistant non-STEC E. coli), Listeria monocytogenes, Salmonella, and Toxoplasma gondii. The report discusses the potential effects of changes in population susceptibility and evolving strains for each pathogen, including the development of any antimicrobial resistance.

The report also explores a number of EPs known or believed to be hazards associated with the consumption or consumer handling of meat and poultry products, as well as EPs that do not occur in the U.S. today but that may extend in range and therefore pose a potential threat in the future.

The focus of this report is EPs in meat and poultry products derived from major (i.e., cattle, swine, chicken, and turkey) as well as minor (e.g., sheep, goat, ostrich, and duck) food-producing species. However, the report is not limited to these. To assess the potential impact of new EPs on all aspects of society, and to gain insights into the effectiveness of EP response, selected examples beyond the scope of meat and poultry are discussed, where appropriate, including the 1998 Nipah virus outbreak that occurred in Malaysia, the 2003 SARS–coronavirus epidemic, and the 2009 H1N1 pandemic. A discussion of the Zika virus outbreak is not included in this report because, at the time of publication, the Zika epidemic was still ongoing. When the epidemic ends, the analysis is likely to hold valuable lessons for the study of disease emergence and pandemic preparedness and response. This study ends with recommendations for implementing a more holistic approach to food safety, one that acknowledges the dynamic and interconnected ecology of microorganisms, humans, food animals, and wildlife and their respective environments.

These recommendations fall into four categories. All are explored in detail at the report’s conclusion:

Those responsible for overseeing the safety of U.S. meat and poultry must take additional steps to protect consumers from newly emerging pathogens and from evolving strains of existing microbes, according to a report released today by The Pew Charitable Trusts. The report, &ldquo;Emerging Pathogens in Meat and Poultry,&rdquo; identifies the ways in which evolving bacterial and viral threats present an ever-changing danger to public health, and it outlines strategies for confronting the challenge posed by emerging pathogens.