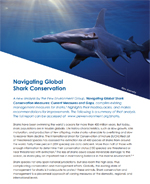 A new analysis, “Navigating Global Shark Conservation: Current Measures and Gaps,” the first global compendium of shark conservation and management measures, notes that although 55 percent of sharks that have enough data available to assess them (150 species) are threatened or near threatened with extinction, current shark management is woefully inadequate. The review is being released as most of the more than 190 members of the UN Food and Agriculture Organization (FAO) convene in Rome for the FAO Committee on Fisheries (COFI) meeting this month.

The summary also details the top 15 countries and fishing entities supplying shark fins to Hong Kong, the world's largest fin market and responsible for approximately half of this global trade. One agenda item at the session July 9 to 13 is a review of the International Plan of Action for Conservation and Management of Sharks, which countries first committed to implement more than 10 years ago.

Shark fishing globally is driven largely by the demand for fins for soup. According to trade data from Hong Kong's Census and Statistics Department, 83 countries or territories supplied more than 10.3 million kilograms (22.7 million pounds) of shark fin products to Hong Kong in 2011.

Due to poor reporting and underreporting of shark catches, it is not known how many sharks are being caught globally. However, scientists estimate that the actual catch is likely to be three or four times higher than official FAO statistics. 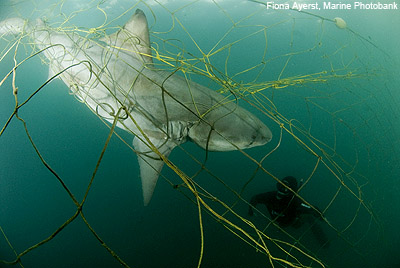 The review of 211 places where sharks are caught includes coastal countries, territories, and political entities. “Navigating Global Shark Conservation” maps out an inadequate patchwork of varying measures at the domestic, regional, and international levels for trade regulation or shark protection. Only about one-third of all countries ban the wasteful practice of finning, and few have protections for individual shark species—even those that are threatened or endangered with extinction.

The review also concludes that protections at the regional and international levels are totally inadequate. Most regional fisheries management organizations, which are responsible for management of many regional fisheries, protect few or no shark species, and only three species of sharks are allowed any protection under the Convention on International Trade in Endangered Species of Wild Fauna and Flora.

The loss of sharks and the major declines in their populations are likely to cause irreversible damage to ocean ecosystems. Healthy and biologically diverse shark populations play an important role in maintaining the marine environment and, importantly, regulate the variety and abundance of species below them in the food web, including commercially important fish.

Sharks as part of a healthy ocean and sustainable fisheries

The Pew Environment Group believes that in the absence of sufficient conservation and management measures, fishing for at-risk shark species should be urgently reconsidered, including prohibitions on fishing of endangered species and adoption of international trade regulations for shark fins of vulnerable species. At COFI, Pew is also advocating for: