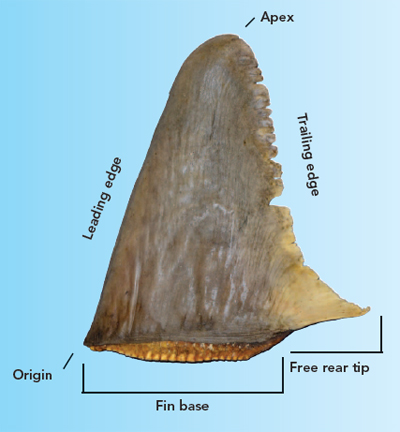 Many experts agree that it is necessary to monitor the trade in fins of five shark species of concern: oceanic whitetip, porbeagle, and three species of hammerhead (scalloped, smooth, and great). These species are globally distributed and large-bodied, and their fins are traded internationally in large numbers. All of these species have been proposed for inclusion in Appendix II of the Convention on International Trade in Endangered Species of Wild Fauna and Flora, which identifies species that could become threatened without trade regulation.

This guide describes the key characteristics that can be used to quickly and easily distinguish the first dorsal fins of these five species from other types of shark fins in trade.

Four of the species–oceanic whitetip, porbeagle, scalloped hammerhead, and great hammerhead–have at least one population listed as Endangered or Critically Endangered by the International Union for Conservation of Nature. In addition, four of the species—oceanic whitetip and scalloped, smooth, and great hammerhead—are subject to conservation and management measures of at least one regional fisheries management organization. This guide focuses on dried, unprocessed first dorsal fins because these are the most easily identified of the fins being traded for these species. More than 500 dorsal fins from over 40 shark species were examined in developing this guide.

Fins from 14 large-bodied shark species make up roughly 40 percent of the global fin trade. The oceanic whitetip and three hammerhead sharks in this guide are included in this group and were estimated to constitute 7 to 9 percent of traded fins in 2000. Shark fin dealers in Asia visually sort fins from these species into specific categories using the shape and color of the fin.

Porbeagle and oceanic whitetip first dorsal fins can be rapidly and unambiguously identified to the species level based on the characteristic white markings detailed in this guide.

The first dorsal fins of hammerhead sharks as a group can also be rapidly and unambiguously distinguished from all other large sharks using two simple measurements that reflect their characteristic shape (much taller than they are broad) and color (dull brown to light gray). The three hammerhead species included in this guide are the only hammerheads that are common in international trade. Identification of hammerheads to a species level requires examination of dorsal and pectoral fin sets or genetic testing.

Although there are more than 450 species of sharks, nearly two-thirds are small (less than 1 meter in length as adults), and their dorsal fins are too small to be confused with the dorsal fins of the large-bodied species included in this guide.

We suggest caution, however, when using this guide to identify fins that are less than 10 centimeters across the base. Only the fins of very young oceanic whitetip and porbeagle and the three hammerhead sharks would be that small.