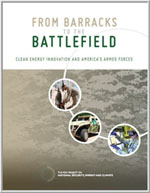 Learn about our latest report

The Department of Defense (DoD) is investing in key clean energy technologies in order to save soldiers' lives and taxpayers' dollars according to national security experts and business leaders who gathered at an energy security forum hosted by Pew at Stanford University on Oct. 17. Accelerating Clean Energy: A Forum on the Intersection of Innovation and National Security was headlined by Maj. Gen. Anthony L. Jackson, commanding general, of Marine Corps Installations West, who described the Marines' energy initiatives and its partnerships with commercial businesses to develop clean technologies and best practices that also often can be deployed outside of the military.

As one of the largest institutional energy users in the United States, DoD has demonstrated a commitment to using energy more efficiently, harnessing alternative sources of power and fuel, and employing technologies that promote a more reliable and secure electricity grid. “DoD consumes more energy than three-quarters of all other countries on Earth,” said Phyllis Cuttino, director of Pew's Clean Energy Program. “The military is in a unique position to help demonstrate and drive energy transformation in the private sector.”

The Pentagon's major energy threats include risks associated with transporting liquid fuels to the battlefield, growing oil price volatility, and the impact of fuel dependence on operational effectiveness, according to From Barracks to the Battlefield: Clean Energy Innovation and America's Armed Forces, a new report by Pew. Overall, the department's priorities have been driven by recent experience in Iraq and Afghanistan, where fuel shipments account for 80 percent of all supply lines. In 2010 there were 1,100 attacks on fuel convoys.

“Our armed services must rely heavily on fossil-fuel, and delivering it to forward deployed units often puts our uniformed personnel at risk,” said Warner, who represented Virginia for five terms. “To lessen the military's requirements for oil, the Department of Defense is increasing vehicle efficiencies, developing next generation biofuels, and deploying renewable energy technologies where possible. These innovations and efficiencies are lowering risks to our troops most importantly those forward deployed.”

Between 2006 and 2009, the department's clean energy investments increased 200 percent from $400 million to $1.2 billion and are projected to eclipse $10 billion annually by 2030. These investments are a promising signal to the private sector. San Francisco-based Solazyme, for example, has provided more than 150,000 gallons of biofuels to the department. Part of these shipments will go toward powering the Navy's "Great Green Fleet," a carrier strike group powered by biofuels that is slated to become operational within five years. Solazyme, along with representatives from Skyline Solar, Johnson Controls, AeroVironment, and VantagePoint Capital Partners, participated in the forum. The Energy Foundation, Precourt Institute for Energy, Shultz-Stephenson Task Force on Energy Policy at the Hoover Institution and Silicon Valley Leadership Group joined Pew in hosting the event.