The Coral Sea is also one of the last places on Earth where large marine animals can still be found in great numbers, making it a special place on a global scale. Ocean giants such as sharks, tunas, whales, dolphins and marlin abound in these waters. Coral reef systems, endangered green turtles, numerous species of seabirds and spectacular sponge gardens (including ancient species considered to be “living fossils”) also make up this tropical marine jewel.

A new science report, Australia's Coral Sea: A Biophysical Profile (PDF), delivers good news about this special place in our oceans: The Coral Sea is a healthy and relatively intact ecosystem. As the first comprehensive scientific study of the marine region, the report's findings recognize the Coral Sea as a global biodiversity hotspot and underscore the need for its long-term protection. 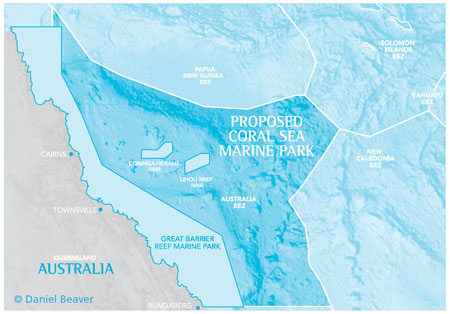 Currently, less than 1 percent of the Coral Sea within Australian waters is protected from fishing and other extractive activities.  Through the Protect Our Coral Sea campaign, the Pew Environment Group's Global Ocean Legacy program is working with Australian conservation organizations and additional partners to help safeguard this unique area for the future. Our goal is to establish a world class, very large, highly protected marine park that will provide a haven for the marine life documented in the new report.

If the whole of the Coral Sea was fully protected, the new Coral Sea Marine Park, at about one million square kilometres (386,000 square miles), would be the world's largest marine park and make an unparalleled contribution to global marine conservation.

Ask the Australian government to establish a marine park in the Coral Sea. Without a high level of protection, the beauty and biodiversity of the Coral Sea will diminish over time. It's important that we do something now.