The Pew Economic Mobility Project conducted an update to its 2009 national poll to reassess the public's perceptions of economic mobility and the American Dream two years later, as the nation emerges from the Great Recession. While pessimism about their own economic circumstances has increased, Americans remain optimistic about the future. They see a role for government to help poor and middle-class Americans succeed, but a majority believes the government currently does more to harm than to help economic mobility.

Americans feel more pessimistic about their own finances, but feel better about the economy.

Americans have grown increasingly negative about their own finances. Less than a third (32 percent) rate their financial situation as "excellent" or "good," down 9 points in just a year, and down 23 points since the recession started in 2007.

However, the number of Americans rating the national economy as "poor" is down significantly, from 73 percent two years ago to a still-high 55 percent today.

Parents have grown more pessimistic about their children's economic chances.

The proportion who believes their kids will have a higher standard of living as adults than they themselves now enjoy has plummeted from 62 percent in 2009 to 47 percent now. And a solid majority (59 percent) says it will be harder for their children to move up the income ladder. Americans also are more pessimistic than two years ago about how far they have come relative to the previous generation. Slightly more than half (56 percent) believe they are better off financially than their parents were at their age, the lowest percentage since the question was first asked in 1981, when 69 percent said so.

By a margin of 85 percent to 13 percent, Americans care more about financial stability than upward mobility.

When focus group participants discussed the financial aspect of the American Dream, few desired to be "wealthy" or "rich." Rather, the words "security" and "stability" arose more frequently. 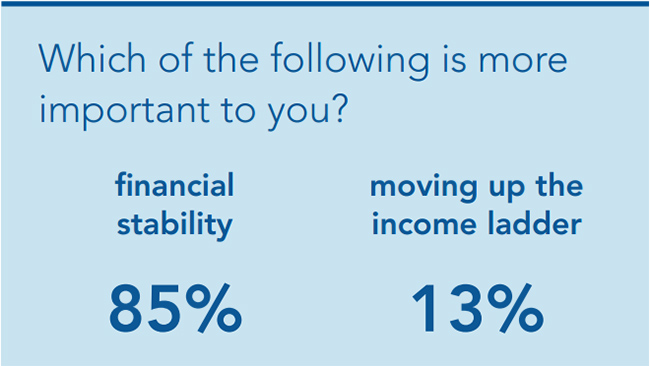 Personal attributes are seen as more powerful than outside circumstances in determining financial success.

Individual attitudes and attributes are considered more important than family background, race, gender or the economy as reasons people get ahead. However, Americans also emphasize the importance of a quality education in promoting upward mobility.

Americans also say the government is helping the wrong people.

Fifty-four percent believe that when the government intervenes, it generally helps the "wrong people." The same number think government helps the rich economically "a great deal," while far fewer say this about "the poor" (16 percent), "the middle class" (7 percent) or "people like you" (6 percent).

Americans' top five goals the government should work toward to help people get ahead: