A new public opinion poll commissioned by The Pew Charitable Trusts' Philadelphia Research Initiative shows a downward drift in Philadelphians' attitudes about their city and its government.

This slightly-less positive outlook is evident in answers to a wide range of questions. It comes in the forms of poorer ratings for most city services, lower assessments of the quality of life in the neighborhoods, fewer residents approving the city's overall direction and reduced job approval numbers for Mayor Michael Nutter and City Council this year compared to last.

Most of the declines are in the single digits. And several of the numbers—including those about the city's overall direction and the mayor's job performance—are not as low as they were in a special April 2009 survey conducted at the height of that year's city budget crisis.

The economic picture could well be contributing to these trends. As a group, Philadelphians remain disheartened about their own economic situations. More than half of all city residents—52 percent—report that they or someone in their household was unemployed and looking for work at some point in the last 12 months. Sixty-three percent describe their finances as “only fair” or poor.

This year, 60 percent of residents rate their neighborhoods as excellent or good places to live, down from 65 percent in 2009.

Compared to two years ago, ratings for specific city services, including libraries and street repair, are down anywhere from 1 to 13 percentage points. 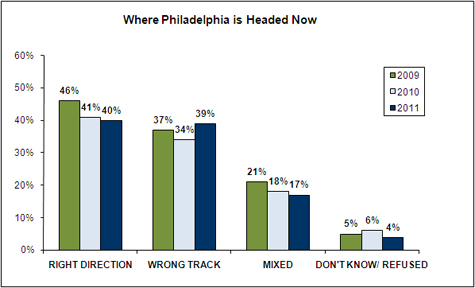 Those who approve of Nutter's job performance continue to outnumber those who disapprove, 52 percent to 37 percent in the current survey. Last year, the margin was a bit wider, 53 percent to 32 percent.

In the past year, City Council's job-approval rating has moved from positive, 42 percent to 34 percent, to slightly negative, 39 percent to 42 percent.

Philadelphians remain optimistic that the tough times for their hometown will not last. Sixty-two percent rate the city an excellent or good place to live—little changed from previous years—and only 19 percent expect the city to get worse in the next five years. In the poll, 69 percent of residents report feeling proud to say that they live in the Philadelphia area.