"Local Jails: Working to Reduce Populations and Costs", a report from The Pew Charitable Trusts' Philadelphia Research Initiative, finds that city and county officials throughout the country are taking steps to reduce jail populations in ways intended to save money, maintain public safety and make the criminal justice system more efficient. For years, jails across the United States have grown in size and expense. But today, facing tighter budgets, communities big and small are reexamining established policies.

These efforts are having an impact. For the first time in three decades, the average daily jail population in large jurisdictions declined in 2009—down 2.3 percent from the previous year, according to the U.S. Bureau of Justice Statistics. It is too soon to tell whether this one-year dip is the start of a new trend, but many jurisdictions seem intent on reversing the population growth of prior years. From 1999 to 2008, jail populations climbed by 30 percent nationally.

Cost concerns may be one factor behind this recent decline in local jail populations. In hard economic times, many cities and counties no longer view jail growth as sustainable or inevitable. From large metropolitan areas such as Cook County, Illinois, which includes Chicago, and Harris County, Texas, which includes Houston, to smaller places such as Lee County, Mississippi, and Spokane County, Washington, taxpayers are confronting the reality that more money for jails can mean less money for other government services. Earlier this year in Atlanta, officials debated curtailing an expansion of the police force in part to keep pace with a growing jail budget. Voters in rural Murray County, Georgia, approved a tax increase to fund an $11-million jail expansion and then found that the county could not afford the staff needed to run it. So the new facility sits empty. And in Corpus Christi, Texas, where the county has experienced a 14-percent increase in local incarceration, headlines in the local paper highlight how taxpayers are “paying the price for locking 'em up.” 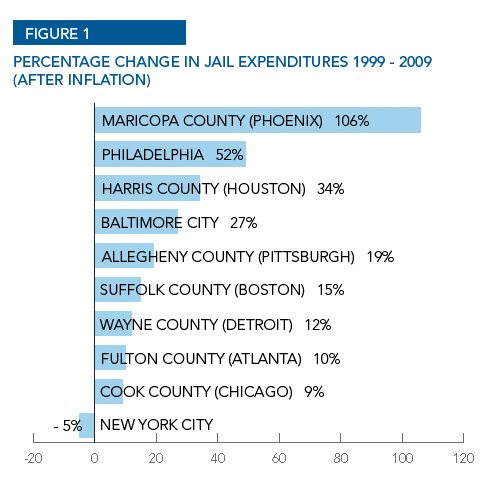 Over the past decade, county jails—facilities for defendants awaiting trial and sentenced offenders serving short-term sentences or awaiting transfer to state prisons—have consumed a greater and greater share of local tax dollars. Harris County, Texas, spends 14 percent of its entire budget on jails. Philadelphia, which is a combined city/county, spends more on jail than it spends on any other function besides police and human services—and as much as it spends on streets, sanitation and public health combined.

In May 2010, Pew's Philadelphia Research Initiative (PRI) published an in-depth study of the Philadelphia jail population titled Philadelphia's Crowded, Costly Jails: The Search for Safe Solutions. As part of that study, PRI compared Philadelphia's jails to other large, urban jurisdictions. They are Allegheny County (which includes Pittsburgh), the city of Baltimore, Cook County, Fulton County (Atlanta), Harris County, Los Angeles County, Maricopa County (Phoenix), New York City, Suffolk County (Boston) and Wayne County (Detroit). This brief provides an updated summary of the national data collected as part of that report. It shows that even with the recent decline in inmate populations, communities around the country are struggling with crowded, costly jails. 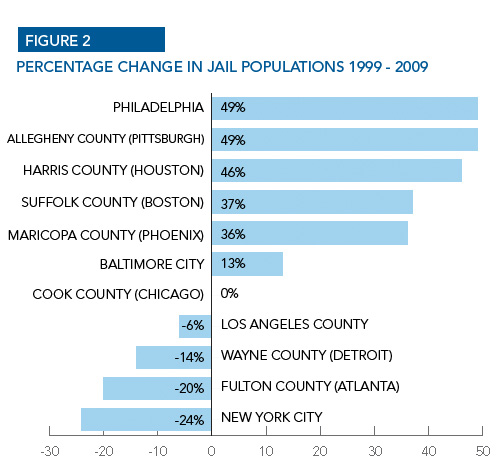 The drop in jail populations parallels a decline in the total population of the nation's state prisons, which was documented in March by the Public Safety Performance Project of the Pew Center on the States. The net decline was 0.3 percent. The Public Safety Performance Project works to help states advance fiscally sound, data-driven policies and practices in sentencing and corrections that protect public safety, hold offenders accountable and control corrections costs.