On balance, the city has been losing fewer people to other communities, especially the suburbs, reducing the magnitude of a six-decade-old trend that was at the heart of the city's long-term population decline. 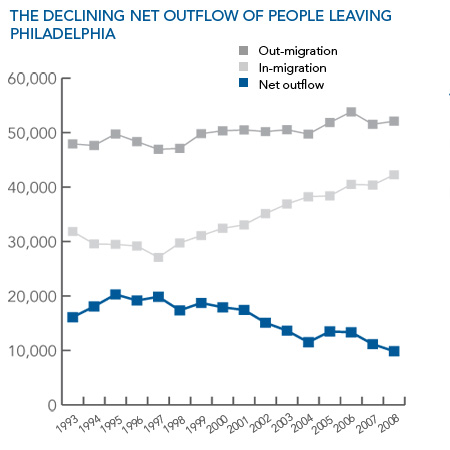 These patterns in the IRS data, which track year-to-year address changes by individuals who have filed tax returns, lend support to recent estimates from the U.S. Census indicating that the city's population has increased slightly during the past decade.

To be sure, more people still are leaving Philadelphia than are arriving; that has been the case in each of the 16 years for which data was analyzed (1993 to 2008). But the net outflow, as recorded by the IRS, has decreased substantially in recent years, from a peak of 20,284 in 1995 to 9,846 in 2008, the last year for which data was available.

A modest net outflow in this data is not inconsistent with a growing population, particularly in a city such as Philadelphia where births outnumber deaths. The IRS data do not include the newly arrived foreign immigrants whose presence helps boost the city's population numbers.

Among the other findings of the analysis are these: 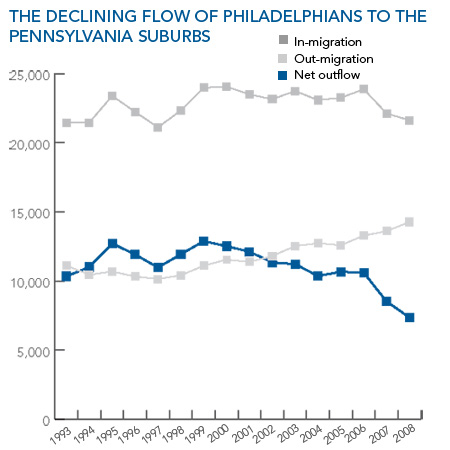 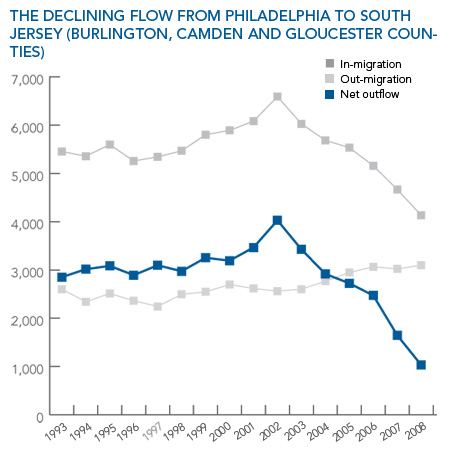 About half of the movement of people in and out of Philadelphia involves locations within the metropolitan area. Outside the region, New York City, Los Angeles County, Cook County (Chicago) and Allegheny County (Pittsburgh) are high on the list of places to which Philadelphians move and from which they come, as is Puerto Rico. So, too, are several Florida counties, as well as counties in the northern New Jersey, Baltimore, Boston and Washington, DC, areas.

The IRS data understate actual migration numbers across the board because, in addition to excluding new foreign arrivals, they do not include people too poor to file tax returns.