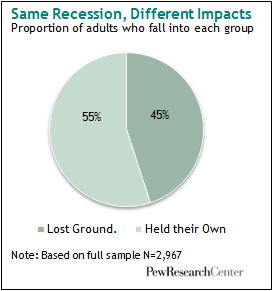 Those Who Lost Ground Slightly Outnumber Those Who Held Their Own

The Great Recession has divided America into two groups that are roughly the same size but that experienced very different economic downturns.

For a narrow majority of Americans (55%), the Great Recession brought a mix of hardships, usually in combination: a spell of unemployment, missed mortgage or rent payments, shrinking paychecks and shattered household budgets, according to a recent survey by the Pew Research Center's Social & Demographic Trends project. But for the other 45% of the country, the recession was largely free of such difficulties.

These two groups differ in their demographic makeup. About seven-in-ten retirees and other older adults largely held their own during the recession, while an equally lopsided majority of 20-somethings did not. Where you live also is associated with how well you fared during hard times: Easterners are significantly more likely than residents of the South, West or Midwest to have better weathered the economic storm. At the same time, suburban and rural residents experienced fewer problems than city dwellers.