Fish are a vital source of nourishment, especially to people in the world's poorest nations. Widespread overﬁshing has led to a decline in catch globally; however, the links between overﬁshing and food security have not been well-understood.

Thara Srinivasan of the Paciﬁc Eco-informatics and Computational Ecology Lab, Rashid Sumaila of the University of British Columbia and their collaborators assessed potential losses, globally and regionally, in ﬁsheries catch (reported landings) and revenue (landed, or dockside, value of the catch) resulting from overﬁshing. They found a third to a half of commercial marine species had been overﬁshed during the past half-century, with billions in potential revenue lost. By placing country-level catch loss trends in the context of undernourishment levels in many of the world's poorest countries, the authors estimated that in 2000 the additional catch from sustainable ﬁshing could have helped 20 million people cover their food deﬁcit and avert undernourishment. 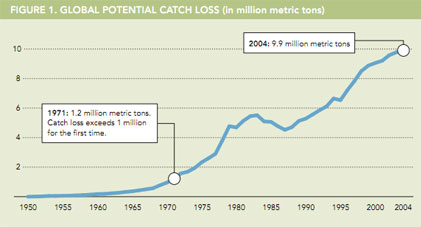 Using midlevel criteria, the authors declared a species-EEZ pair as overﬁshed if, after the year of maximum catch, the species stock fell to 50 percent of its maximum level for at least 10 successive years, or 15 in total from 1950 to 2004.

This Pew Ocean Science Series report is a summary of the scientists' ﬁndings.