For at least two decades, scientists and conservationists have recognized the importance of tropical forests for carbon sequestration and biodiversity protection. This focus has thankfully led to the adoption of policy mechanisms that have directed monies from carbon trading revenues and other sources towards protection of tropical forests. Outcomes from international policy actions have also included recent increases in the amount of protected area within the largest, intact tropical forest block, the Amazon forest, as compared with any other region globally (Jenkins and Joppa 2009).

In contrast, boreal forest regions have been largely overlooked as a global conservation priority. This oversight continues despite their massive carbon stores that are important for climate change mitigation and their high ecological intactness which sustains a host of globally significant biodiversity and cultural values (Bradshaw et al. 2009). Outdated and incorrect information that downplays the volume of carbon stocks in boreal forest regions is still widely cited and used by policy makers, media, and some scientists. This has contributed to a serious underrepresentation of the critical global importance of boreal carbon stocks in ongoing carbon management policy initiatives.

Boreal forests and peatlands worldwide store more terrestrial carbon than any other single biome on earth. The high carbon density of the boreal forest region has resulted from the slow accumulation of carbon over millennia. 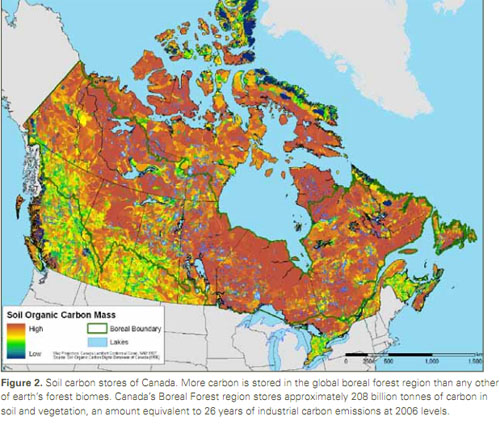 Whereas carbon flux in tropical forests is balanced between plant growth and decay, the cool temperatures of boreal ecosystems lead to carbon accumulation by preventing the breakdown of dead biomass. Keeping boreal carbon reservoirs in place is important if we wish to avoid accelerating the pace of climate change. The boreal forest region's intactness also provides essential buffering against rapid climate-induced changes that are already affecting northern ecosystems, impacts made worse by industrial land uses
that are increasing in rate and intensity across the boreal region. Conservation of boreal ecosystems helps mitigate climate change by protecting large carbon stores. Conservation is also key to adaptation, as conservation helps maintain the resilience of the region to effects of rapid climate change. maintaining intact habitat will allow the necessary range shifts of plants and animals without the additional stress of habitat loss and fragmentation.

Action is needed to conserve a region that contains ‘the carbon the world forgot.' As the world develops climate change agreements, it is essential that policies are adopted that are consistent with the globally significant contribution of the boreal region to climate change mitigation and adaptation. To help inform such policy development, this report describes the significance of Canada's Boreal Forest region and identifies strategies suited to conserve both its carbon and its resilience to climate change.