In September 2006 the Genetics & Public Policy Center was awarded funding from the National Human Genome Research Institute of the National Institutes of Health (NIH) to study the American public's attitudes toward a proposed large-cohort research study of genetic and environmental contributors to health. Specifically, NIH and other federal agencies were interested in the possibility of collecting both genetic and non-genetic information on half a million volunteers who would be followed for a period of 10 years or more in order to study the links between genetic and environmental factors and common diseases. Prior to undertaking such an initiative, the agencies wanted to understand public attitudes about and willingness to participate in such a research project.

For the Center, the agreement represented a welcome opportunity to continue and expand on our public engagement work. We believe strongly that the public should have a hand in shaping policy, including science policy. Accordingly, we've used focus groups, interviews, town hall meetings, and national surveys to assess public attitudes on topics ranging from embryonic stem cell research to genetic privacy to reproductive genetic technologies.

This project afforded us the perfect opportunity to both share information with the public and reflect citizens' views and ideas back to planners of the research at NIH in a meaningful way.

The Public Consultation Project on Genetics, Environment, and Health began with a series of 16 focus groups in six locations. Participants were shown a video the Center had developed explaining the proposed large-cohort study, and then discussed whether the study should be done and why or why not, and what factors would influence their willingness to participate. Following the focus groups, 27 individual interviews about the proposed study were conducted with community leaders in the same locations. The qualitative data from the focus groups and interviews helped shape the subsequent phases of the project, a national survey and a series of town halls. The town halls took place in the same cities as the focus groups and the interviews.

The five town halls were held from March-May 2008 in Jackson, Mississippi; Kansas City, Missouri; Philadelphia, Pennsylvania; Phoenix, Arizona; and Portland, Oregon. These forums were larger and more diverse than individual focus groups, ranging from 76 to 134 participants each. We conducted the town halls both to gather further feedback about the proposed study and to test the town hall format's effectiveness as a public consultation tool.

The town halls were free, open to all, and publicly advertised. In our recruitment efforts, we attempted to achieve a mix of town hall participants that matched the demographics of each community. In the end, the events attracted groups who tended to be more highly-educated than the general populace: More than half had received a bachelor's degree, while fewer than 20 percent had no education beyond high school.

In each community we selected a site that was publicly accessible and a day and time that would maximize attendance. Three of the town halls took place on Saturday mornings beginning at 10:00, while the remaining two were held on weekday evenings at 5:30. Each lasted approximately two and a half hours. Participants were given name tags when they arrived, and chose their own seats at one of the large, round tables in the room (except in Phoenix, where the town hall was held in an auditorium).

A senior member of the Genetics & Public Policy Center staff began each session by welcoming the participants and explaining that the goal of the Public Consultation Project – and of the town halls – was to gather feedback on a proposed large-cohort government study of genes, environment, and health. The staff member also explained that the Center did not have a stake in whether the study went forward, but rather was committed to reflecting public feedback accurately to NIH. She then introduced Jonathan Ortmans of the Public Forum Institute, who served as the moderator for each town hall. The moderator spoke briefly about what participants could expect during the town hall, and then laid out the three main questions the event would address:

Participants were shown a nine-minute video (see box, page 5) about the proposed study and given the opportunity to ask questions about it. They also used electronic keypads to indicate whether they thought the study should be done, and if so, whether they would participate. Aggregated responses were projected in real time on a screen behind the moderator to show participants the mood of the room and spur discussion.

The moderator then led participants through a series of questions about the proposed study. In each case he first gave participants time to discuss the question with others sitting at their table (or, in Phoenix, with those sitting nearby), and to jot down answers in individual workbooks. After about five minutes of deliberation, participants were encouraged to share their answers with the rest of the room. The answers again were projected in real time. Participants were then asked to vote on which of the listed factors were, in their view, the most significant. The results of these votes were shared immediately with the group. Near the end of the event, participants voted again on whether the study should go forward, and whether they would participate in such a study. They were asked to share any closing thoughts about the study, and finally were thanked for their participation by the Center staff member. Workbooks in which participants had shared their thoughts were collected as particpants exited.

Participants viewed a video about the proposed study. The video illustrated that:

Schematic: The proposed study (from video) 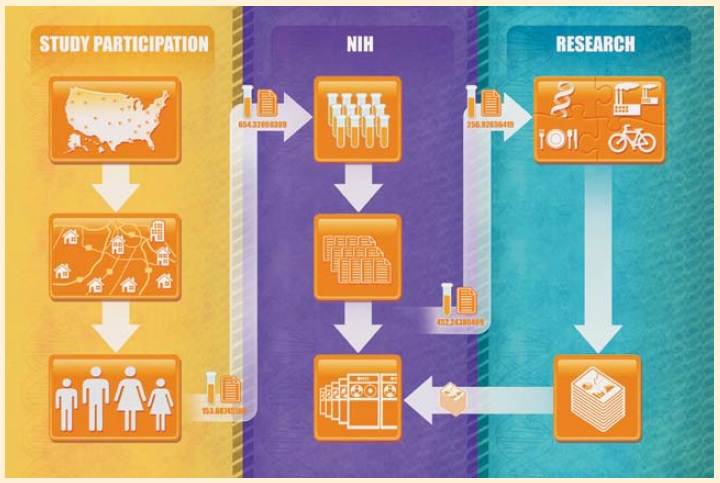 The moderator asked participants first to consider the potential benefits and drawbacks of the study. Improved prevention of and treatments for disease came up frequently, as did identifying environmental or lifestyle factors that could lead to longer, healthier lives. Some participants surmised that the study would lead to a reduction in health care costs. Disease prevention and/or treatment was voted the most important benefit in all of the town halls.

Either loss of privacy, or the possibility that insurance companies might obtain individuals' genetic information and use it against them, ranked as the most significant concern about the study in every town hall except for Jackson's. Topping the list in Jackson was the potential that the study's findings could be used for genetic manipulation in the future. Participants cited the cost of the study as a burden; a few also mentioned the cost to companies should their products (e.g., plastic) be found to be harmful to human health. During the benefits and burdens discussion and at other points during the town halls, participants frequently expressed concern that pharmaceutical or other companies might profit off of the taxpayer-funded proposed study. “They may produce drugs that are so expensive that most people couldn't afford them,” said one participant.

A less-frequently-voiced – but still fairly common – concern was that the results would be used by law enforcement or for various nefarious purposes: “Even though you're a number, you're still putting yourself at potential risk for this knowledge to be out among the folks to use for not curing diseases, but for perhaps engineering different diseases to wipe out populations.”

Acceptable and unacceptable types of research

Participants were asked to consider what types of research should and should not be done with the information collected by the proposed study. Research aimed at curing disease was commonly cited as acceptable, and some participants named conditions such as cancer, birth defects, and diabetes. Some suggested that diseases affecting large numbers of people should be the highest priority. Identifying environmental factors that cause disease came up several times.

Human cloning was cited in every town hall as an unacceptable use of the proposed biobank, although in one case participants differentiated between reproductive cloning (unacceptable) and cloning aimed at regenerating organs or otherwise curing disease (acceptable). Participants frequently named research aimed at altering humans or creating “designer babies” as unacceptable. Another area of concern was “things that point out differences between gender, or race, or anything like that that people use to discriminate.” Other areas mentioned included weapons development, intelligence, alcoholism, and sexual orientation.

How the results compared to the focus groups and survey

The support for the study and likelihood of participation that participants voiced during the town halls was consistent with what we heard in the focus groups and in the national survey we conducted. In the survey, 84 percent of respondents said the study should definitely or probably be done, and 60 percent would definitely or probably participate. Like the focus groups and survey, the town halls demonstrated the importance the public places on access to individual research results. Focus group participants, like those in the town halls, largely felt that study subjects should be able to choose whether to receive individual research results, and what kind.

In both the focus groups and the town halls, participants voiced concerns about privacy, and not allowing health insurance companies access to individuals' data. They also said that the database should not be exploited by pharmaceutical companies or accessed by law enforcement agencies, and that the results should not be used to discriminate against demographic groups. Both groups of participants showed interest in the details of the proposed study's methodology, and many made suggestions aimed at ensuring the findings are robust.

Town hall participants consistently placed privacy and possible misuse of information among their top concerns about the proposed study. The Genetic Information Nondiscrimination Act of 2008 passed the U.S. Senate on April 24, 2008 (the day of the fourth town hall, in Portland), and cleared the House the following week. It was signed into law by the President on May 21. The bill bars employers and health insurance companies from discriminating against individuals based on their genetic makeup. Despite media coverage of the bill's passage, we saw no change in level of concern about privacy and discrimination between the first three town halls and the final two. Whether and how the new policy affects public attitudes about genetic privacy and discrimination will require follow-up study.

Overall, we saw strong support for the proposed study and its goals both at the beginning and at the end of each town hall. Not everyone who supports the study would be willing to participate in it, but more than half of participants indicated they were likely to participate if asked.

This pilot project demonstrates how a community discussion might be conducted for the proposed study – should it be funded – or for other studies that require public input, acceptance, and participation. One limitation of the town halls, however, is that those who attend are not necessarily representative of their communities; many come because they are stakeholders or are otherwise particularly interested in the topic. Attendees also were better educated than the general populace, with most holding at least a bachelor's degree. A variety of engagement tools would be needed to inform and engage all segments of a community.