After a criminal justice overhaul in 2012, Georgia enacted House Bill 242 in 2013, which included wide-ranging reforms to its juvenile justice system based on recommendations from the Special Council on Criminal Justice Reform for Georgians. The council's provisions of the bill will save an estimated $85 million over five years and reduce recidivism by focusing out-of-home facilities on serious offenders and investing in evidence-based programs. The bill also streamlines and revises the state code relating to juvenile justice and child welfare, including creating new processes for cases involving children in need of services. 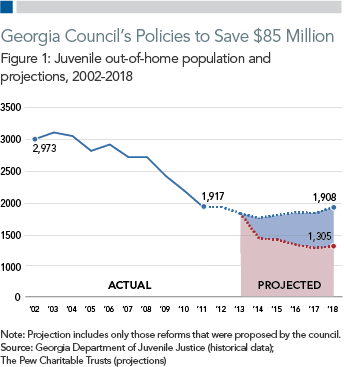 Problem: In fiscal 2013, the Georgia Department of Juvenile Justice, or DJJ, was appropriated $300 million, nearly two-thirds of which paid for out-of-home facilities, which include secure and nonsecure facilities.1 The state's secure residential institutions—youth development campuses, or YDCs, and regional youth detention centers, or RYDCs,—cost an average of about $90,000 per bed per year. Despite these substantial expenditures, results were poor: More than 50 percent of adjudicated youth were readjudicated delinquent or convicted of a crime within three years of release, a rate that has held steady since 2003. For youth released from YDCs, the recidivism rate was 65 percent.

Findings: The special council conducted an extensive review of the state's data and found that the juvenile justice system was producing poor results despite the high cost. A significant number of youth in expensive out-of-home facilities had been adjudicated for low-level offenses, many were assessed as a low risk to reoffend, and the public safety outcomes were weak. Additionally, the council found that many parts of the state had limited or no community-based programs for juvenile offenders, leaving judges with few options other than commitment to a state facility.

Reforms: The council, with technical assistance from The Pew Charitable Trusts, the Annie E. Casey Foundation, and the Crime & Justice Institute, issued recommendations that focus state facilities on higher-level offenders; reduce recidivism by investing in evidence-based programs and practices; and improve government performance by requiring data collection and performance-based contracting. HB 242, which contained many of the council's policy recommendations, passed both chambers of the General Assembly unanimously and was signed into law by Governor Nathan Deal on May 2, 2013. The state also appropriated $5 million in fiscal 2013 to fund a county-level voluntary incentive grant program.

Impact: The 2013 initiatives are expected to save Georgia nearly $85 million through 2018 and avoid the need to open two additional juvenile residential facilities. This will allow the state to reinvest a portion of the savings to expand community-based programs and practices proven to reduce recidivism.