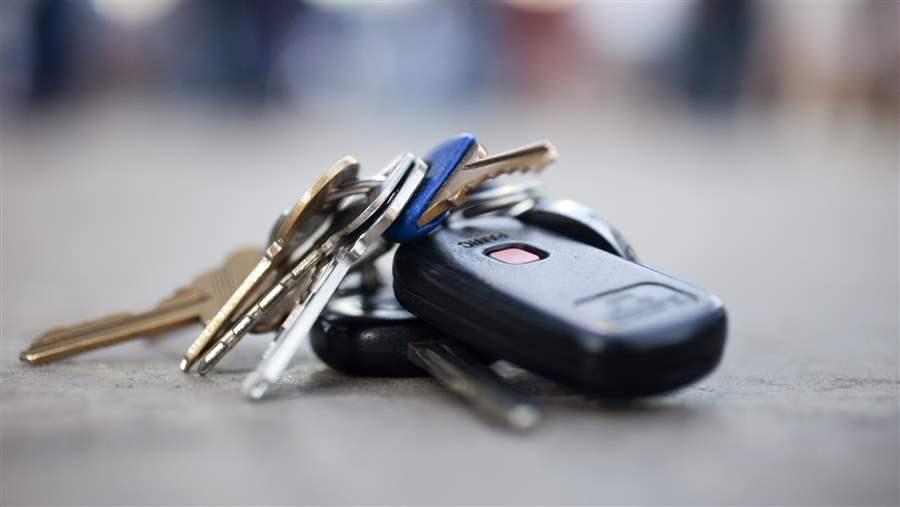 In 1993, the National Voter Registration Act mandated that state motor vehicle agencies (MVAs) offer their customers the opportunity to register to vote or update their registration information during licensing transactions. The law, commonly known as Motor Voter, was broadly intended to “establish procedures that will increase the number of eligible citizens who register to vote in elections for federal office” and sought to leverage the data that eligible voting-age citizens submit during licensing transactions to complete their registration applications. Motor Voter remains the most common method by which American citizens register to vote; as of the 2016 presidential election, 25.5 percent of registrations were filed at motor vehicle agencies.1

When executed effectively, Motor Voter can help ensure that voter registration lists are up-to-date and inclusive with minimal cost to taxpayers. Several states have implemented or are developing plans to better automate Motor Voter transactions, a process sometimes referred to as automatic voter registration (AVR). These systems take personal data provided on driver’s license or state ID applications and, unless the customer opts out of the registration process, use them to register eligible licensees to vote without requiring additional paperwork.

In a 2014 report, “Measuring Motor Voter,” The Pew Charitable Trusts noted that research on Motor Voter implementation has been constrained by poor data quality in state systems.2 To explore this issue further and fill gaps in current data collection, Pew commissioned a 2016 survey of almost 3,000 citizens in five Great Lakes states—Illinois, Indiana, Michigan, Minnesota, and Ohio—as they exited MVAs after completing licensing transactions in order to determine the extent to which their experience complied with the Motor Voter law. The findings include: 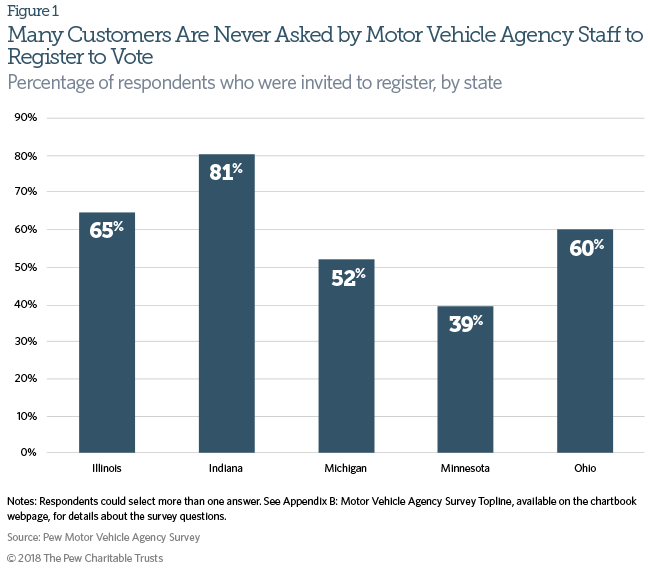 Across the five states, roughly 60 percent of respondents reported being offered the opportunity to register to vote or update their registration during their licensing transactions, while 40 percent indicated that no such offer was made or that they could not recall one. Under the National Voter Registration Act (NVRA), all licensing and state ID transactions in covered states must include an opportunity to register. Importantly, despite Minnesota’s low performance in this survey, the state is not in violation of NVRA because it offers Election Day voter registration, which exempts it from the law’s requirements. 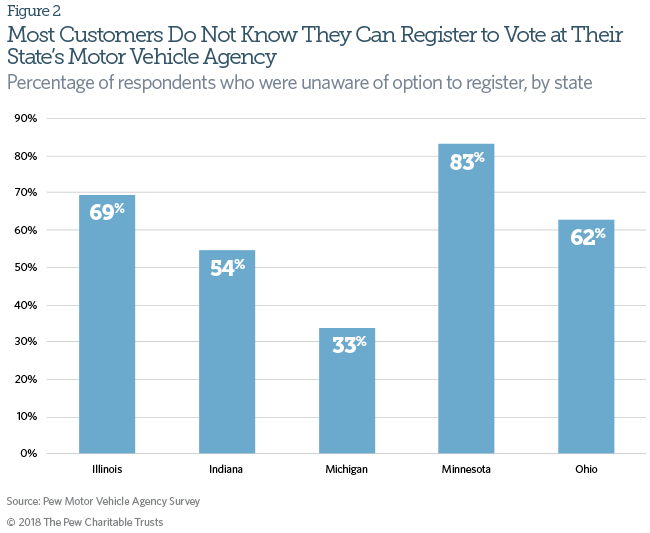 More than 60 percent of respondents said that before their visit to an MVA, they were not aware that they could register or update their voter registration record. Of the five states, Minnesota had the largest share—83 percent—of respondents who indicated that they did not know about Motor Voter. 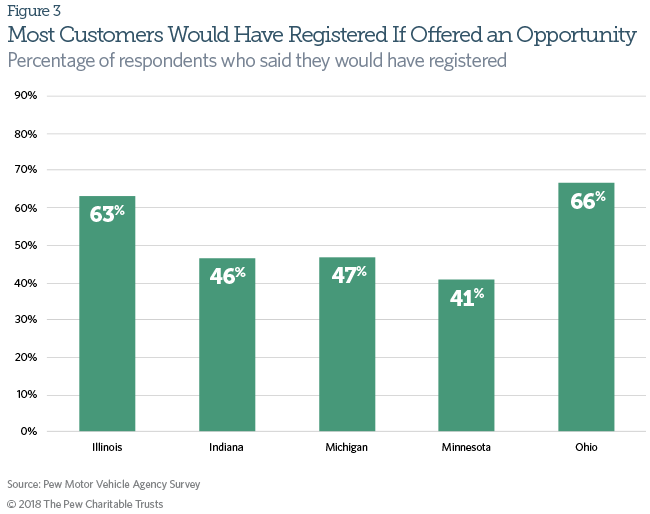 In all five states, a majority of respondents who were not offered a chance to register to vote said that they would have registered if they had been invited to do so. The highest rate of such missed opportunities occurred in Ohio (66 percent), followed closely by Illinois (63 percent). 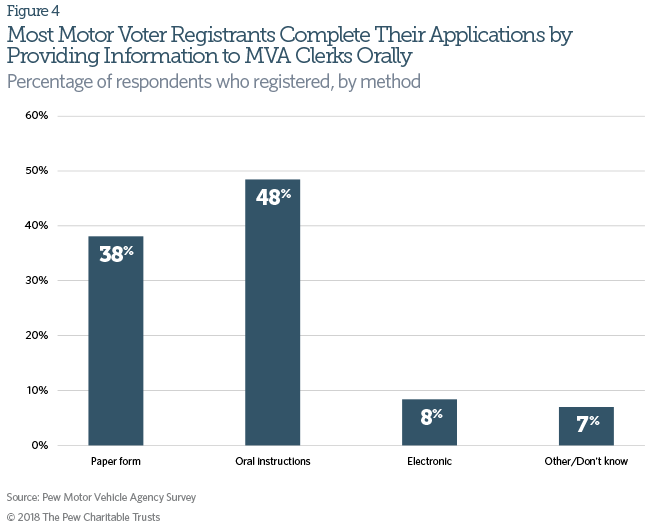 Almost half of respondents who registered to vote during their licensing transactions reported doing so by providing oral instructions to the attending MVA clerk. Another third filled out a paper application form. Only 8 percent of respondents reported using an electronic device to complete or submit their applications. 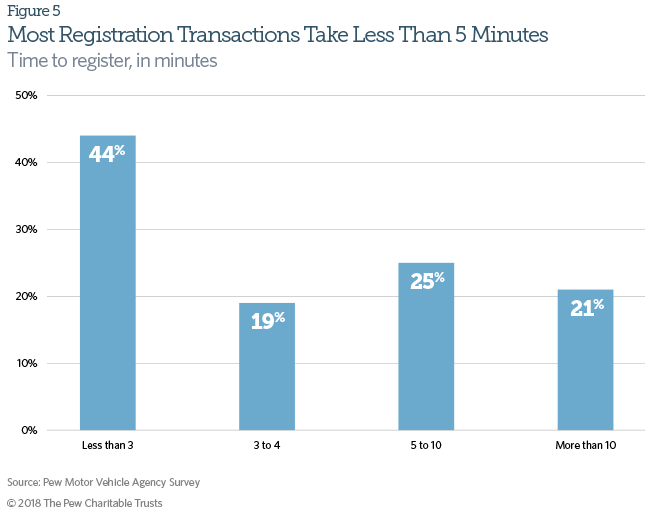 Customers reported a mean time of six minutes to register to vote, and 63 percent said registering took less than five minutes. A reliable comparison of transaction times by registration method was not possible because too few people reported encountering electronic registration systems at MVAs. However, customers who provided information to a clerk orally reported shorter transaction times than those who filled out paper forms. 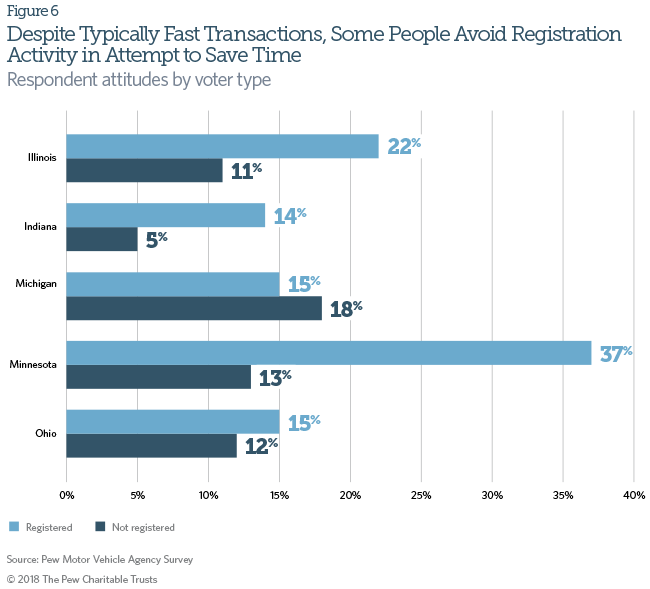 Although the survey indicates that motor vehicle agencies generally are offering registration opportunities, this is not universally the case across the five states studied. While just a few states—Illinois, Indiana, Michigan, Minnesota, and Ohio—were included in the survey, its findings can inform states across the country about the continued need to effectively administer voter registration practices in NVRA agencies.

To enforce the administration of Motor Voter during applicable licensing transactions, several state MVAs record customers’ choices to register or not so that the state can track the regularity with which people are offered registration opportunities. This data collection and analysis can also help identify whether specific branches or employees experience disproportionately high rates of declined registrations.

Electronic licensing and registration systems afford citizens the chance to affirmatively declare their intent to register or decline, but the limited proportion of such systems at the MVAs in this study indicates that control over the transaction still most often resides with clerks rather than customers. However, states across the country are increasingly making electronic upgrades to Motor Voter practices by including the registration transaction within an automated licensing process or by leveraging an existing online voter registration system to facilitate the exchange of records between motor vehicle and elections agencies.

All states could also consider ways to heighten citizen awareness of opportunities to register to vote at MVAs through social media campaigns or simple signage within agency branch locations.

Edison Research conducted the Pew Motor Vehicle Agency Survey via in-person interviews among respondents leaving 100 total motor vehicle agencies in Illinois, Indiana, Michigan, Minnesota, and Ohio between April 25 and May 27, 2016. The researchers presented the same single-page, double-sided survey to respondents at each location as they exited the MVA. Only respondents who were 18 years of age or older, were U.S. citizens, and had just engaged in a licensing transaction were eligible to participate in the study. Forty-four percent of the prospective participants approached by the survey team qualified based on these criteria. A total of 2,940 interviews were completed.

Each state’s data has been weighted to account for varying response rates across demographic groups. This was done by recording the gender, approximate age, and race of those who did not participate in the study. By adding the demographics of respondents who completed interviews and those who either refused or were not approached, the survey team was able to determine the total survey “population.” The data was then weighted so that the demographic characteristics match the combined survey “population” of each state. When the state data was pooled into a “total” data set, states were again weighted according to their proportion of the combined five-state population.