What Drives Inappropriate Antibiotic Use in Outpatient Care? 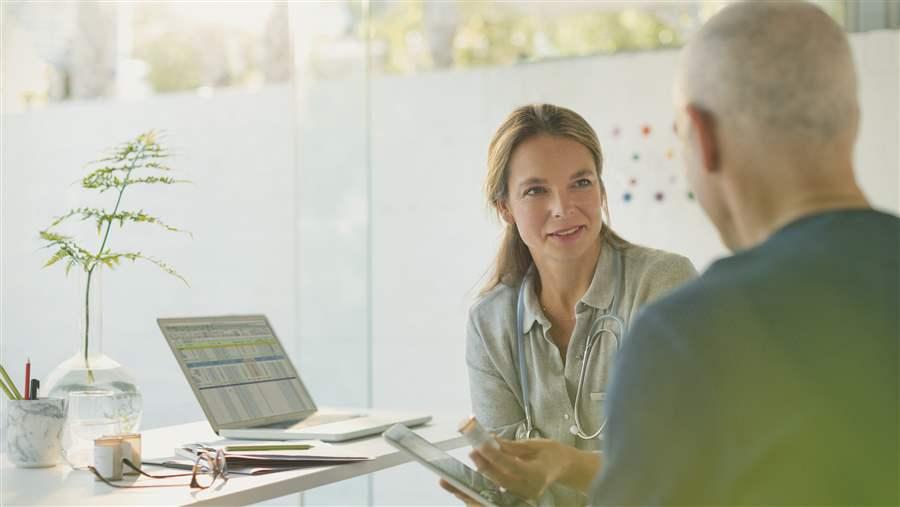 This issue brief was updated in December 2017 to correct what the evidence shows regarding the effects of communications training.

Inappropriate antibiotic prescribing is common in outpatient settings across the United States. A recent study by the Centers for Disease Control and Prevention and The Pew Charitable Trusts found that nearly 1 in 3 antibiotics prescribed at outpatient facilities—including physician’s offices, emergency departments, and hospital-based outpatient clinics—is unnecessary,1 equaling 47 million prescriptions each year. Reducing this inappropriate prescribing is a critical step toward minimizing the development of antibiotic-resistant bacteria. By understanding the factors that affect physicians’ antibiotic prescribing decisions and applying concepts from the social and behavioral sciences to stewardship strategies, stakeholders can more effectively minimize inappropriate prescribing, which in turn helps to reduce the threat of resistance.

Deciding whether to prescribe an antibiotic can be a complex process, during which physicians are influenced not only by medical information, but also by their interactions with patients, the uncertainties that surround medical decision-making, and the organizational challenges of delivering care in busy outpatient settings. In order to design effective antibiotic stewardship interventions that ensure these drugs are prescribed appropriately, public health stakeholders need to understand the underlying factors that can affect a physician’s prescribing decisions.

Patient demand is often cited as a driver of antibiotic prescribing.2 Patients or their families may expect to get a prescription at an office visit, even when an antibiotic is not necessary. They may wrongly believe that antibiotics can relieve symptoms similar to those they’ve experienced in the past, such as a high fever.3 Interviews with physicians reveal that some have been swayed by this perceived pressure to prescribe unnecessary antibiotics.4 One study found that physicians were much more likely to prescribe antibiotics to pediatric patients when they believed the child’s parents expected them to, regardless of the diagnosis or the parents’ actual expectations.5

Patient pressure may be particularly influential in a physician’s decision-making because doctors relate to patients as both a caretaker and service provider. As such, they must be conscious of both patient health and customer satisfaction. In interview-based studies, clinicians report that they sometimes prescribe antibiotics owing to concerns about appearing to have done nothing for their patients or out of fear of losing patients to competitors.6 Some physicians may believe that prescribing antibiotics will increase patient satisfaction with the office visit.7 Others believe that there is little use in refusing to prescribe an antibiotic, since patients can simply go to another doctor to get a prescription.8 Physicians may feel ill-equipped—both in terms of time and resources—to counter perceived patient pressure.

While the studies cited in this issue brief focus on the drivers of antibiotic prescribing by physicians, it is important to note that other health care providers—such as dentists, nurse practitioners, and physician assistants—are important providers of outpatient health care services in the United States. In 2014, these providers prescribed about 79 million courses of antibiotics, which represent almost 30 percent of the antibiotics prescribed in outpatient settings.* Designing antibiotic stewardship interventions that address the inappropriate prescribing behavior of all types of health care providers will be critical to solving the challenge of antibiotic resistance.

In outpatient settings, doctors have limited time to see patients, diagnose their illnesses, and formulate a treatment plan. In interviews, physicians often say workload and time pressures contribute to the overprescription of antibiotics.9 One study of Norwegian general practitioners found that busier physicians, those with more consultations, prescribed antibiotics at a higher rate than their less busy colleagues.10 Interviews with physicians suggest that they may quickly prescribe antibiotics because a shorter office visit allows them to see more patients or because they want to avoid lengthy explanations of why antibiotics are not needed.11

The process of repeatedly diagnosing and treating large numbers of patients may also affect a doctor’s capacity to make sound, consistent prescribing decisions. A recent study analyzed how likely clinicians were to prescribe antibiotics for acute respiratory infections—conditions for which these drugs are only rarely recommended— depending on the time of day.12 The findings showed that as their workday wore on, physicians were significantly more likely to prescribe antibiotics for these infections. The authors posited that “decision fatigue,” a decline in decision-making abilities after having to make repeated decisions, could be an explanation.13

A recent study … showed that as their workday wore on, physicians were significantly more likely to prescribe antibiotics for [acute respiratory] infections. The authors posited that “decision fatigue,” a decline in decision-making abilities after having to make repeated decisions, could be an explanation

Diagnostic uncertainty is another reason given for inappropriate prescriptions.14 Patients with viral and bacterial infections often have similar symptoms—congestion, cough, sore throat—making it difficult for physicians to differentiate between the two.15 For some conditions, a definitive diagnosis is difficult. It is not usually practical or desirable in an outpatient environment, for example, to collect the samples needed to diagnose whether a sinus infection is viral or bacterial because doing so would require an invasive procedure.16

Interviews with physicians demonstrate that when patients have these ambiguous symptoms, clinicians may nevertheless prescribe antibiotics immediately because they see it as the safe choice.17 Physicians report being hesitant to let sick patients leave without treatment because they fear the condition could worsen, potentially exposing themselves to legal action.18 One study found that many physicians perceive the risk of undertreating a patient to be greater than the risk from unnecessary antibiotic use.19

Given the volume of inappropriate antibiotic prescriptions and the ever-growing threat of antibiotic resistance, one might wonder why physicians do not simply examine and improve their prescribing. In some cases, they may not think that their individual practices, or those of peers in the same medical specialty, contribute significantly to the problem.

For example, in interviews with primary care pediatricians who participated in an antimicrobial stewardship intervention, all participants agreed that antibiotic overuse is a major problem.20 However, the vast majority also felt it was not a significant problem among their specialty but rather was caused by practitioners in other areas of medicine. In another study with primary care clinicians, all participants interviewed agreed that antibiotics are not appropriate for treating acute bronchitis.21 The physicians, aware that antibiotics are overprescribed for this condition, attributed the problem to other clinicians.

Central to designing effective antibiotic stewardship interventions is an understanding of the underlying factors that influence prescribing decisions. As highlighted above, a number of studies have focused on identifying the behavioral drivers of prescribing.

This knowledge base provides stakeholders with new insights to guide the development of antibiotic stewardship strategies that help doctors move closer to appropriate antibiotic use. Because it is difficult to change behavior, the approaches below may have a limited effect. However, they provide a valuable starting point for interventions that leverage social motivations to improve practice. Examples of common strategies include: 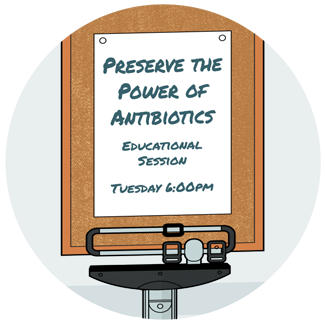 Educational initiatives, including both public awareness campaigns and professional learning opportunities, are potential ways to increase awareness of antibiotic overuse and help improve patient-physician communication. However, studies show that educational interventions may or may not have an effect on antibiotic prescribing.22 While continued education on appropriate antibiotic use is important, general education or awareness efforts alone are unlikely to significantly reduce inappropriate use. 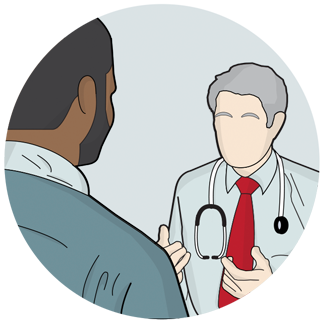 Communications training can help improve the dialogue between patients and physicians and reduce pressure on clinicians to inappropriately prescribe. Evidence shows that training in these skills—such as understanding patient concerns and communicating an agreed-upon treatment plan—can decrease unnecessary antibiotic prescribing.23 One promising approach involves coaching physicians to suggest “positive,” nonantibiotic steps patients can take to feel better, such as home remedies to relieve symptoms.24 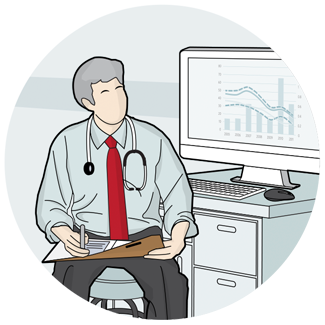 Audit and feedback strategies aim to make physicians more aware of their own prescribing habits. These programs review individual prescriber behavior and relay the findings back to physicians, often benchmarked against their peers or expected prescribing rates. Audit and feedback has been shown to improve antibiotic prescribing in some studies of outpatient settings,25 but other studies have yielded mixed results.26 Additionally, the impact of this type of intervention appears to last only as long as the intervention itself. One study found that once a successful audit and feedback program ended, antibiotic prescribing rates gradually returned to previous levels.27 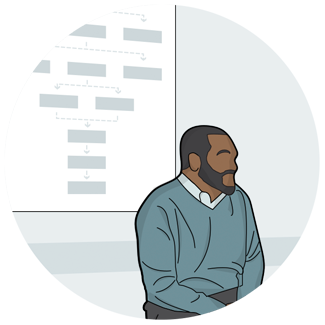 Clinical decision support systems can guide prescribers through the process of evaluating patients and determining appropriate treatment plans consistent with current best practices. These systems, which can range from paper guidelines to computerized alerts, have been shown to be effective at improving antibiotic prescribing.28 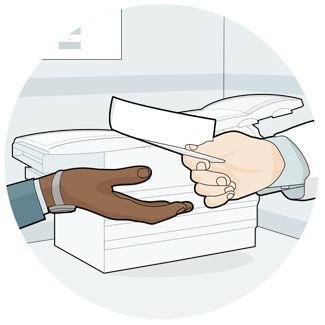 Delayed prescriptions can help physicians manage situations in which they are uncertain about a patient’s diagnosis but are afraid the condition may get worse. Using this approach, sometimes referred to as “watchful waiting,” a physician writes an antibiotic prescription but advises the patient to fill it only if symptoms persist or worsen. A systematic review of the available evidence shows that this approach can reduce the number of antibiotic prescriptions filled, but the impact on patient satisfaction is unclear.29

To have a greater impact on physician prescribing habits, researchers have begun integrating behavioral science techniques into stewardship strategies. These interventions attempt to target physicians’ underlying social motivations in order to influence their decision-making through a technique known in the field of behavioral economics as “nudging.”30

One recent intervention sought to reduce inappropriate antibiotic prescribing by appealing to physicians’ desires to adhere to commitments they make publicly. Clinicians were asked to sign a letter explaining their pledge to follow guidelines for appropriate antibiotic prescribing and the reasons antibiotics are not always needed. The letters were enlarged and posted in each physician’s office, where it would be easily visible to patients, alongside the provider’s photograph. Physicians displaying these commitment posters were found to prescribe inappropriate antibiotics at a rate nearly 20 percent lower than those not participating in the poster intervention.31 The researchers surmised that the physicians did not want to contradict their public commitment.

Improving outpatient antibiotic prescribing practices is critical to minimizing the growing public health threat of antibiotic resistance. However, reducing inappropriate use is challenging. Health care stakeholders—including professional societies, health systems, and policymakers—can help build on the evidence base of why and how physicians make prescribing decisions to help design and implement more effective antibiotic stewardship programs in outpatient facilities.

This brief benefited from the insights and expertise of external reviewers Julia Szymczak, assistant professor of epidemiology in the department of biostatistics, epidemiology, and informatics at the University of Pennsylvania; and Matthew Kronman, assistant professor of pediatrics in the division of pediatric infectious diseases at the University of Washington. Although they have reviewed the brief, neither they nor their organizations necessarily endorse its findings or conclusions.