In 2015, West Virginia enacted S.B. 393, a bill to improve juvenile justice policies based on recommendations from a bipartisan state task force. The law will reduce the placement of low-level youth offenders in state-funded facilities and steer resources toward community-based sanctions and services that cost less and are more effective at reducing recidivism. The changes are projected to cut the number of committed youth by at least 16 percent over five years, saving an estimated $20 million, which will be invested in evidence-based community interventions for juvenile offenders.

Nationally, the number of juveniles committed to residential placement facilities declined 35 percent from 2006 to 2011, mirroring a nationwide decrease in youth arrest rates.1 West Virginia’s committed juvenile population, however, increased 5 percent during this period, even as crime declined statewide.2 State taxpayers spent as much as $100,000 per year per youth in a residential placement facility, even though research shows that such placements generally fail to reduce reoffending.3

The West Virginia Intergovernmental Task Force on Juvenile Justice conducted an extensive review of the state’s system. It found that nearly 60 percent of youth committed to the Division of Juvenile Services (DJS) in 2012 were misdemeanants or probation violators and that three-quarters of those placed out of home through the Department of Health and Human Resources (DHHR) were status offenders or misdemeanants.4 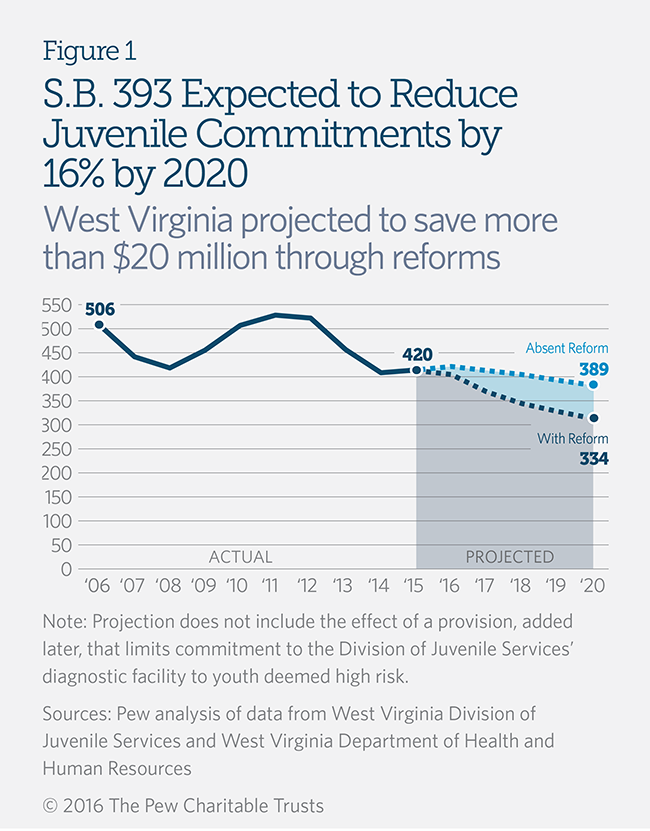 The task force recommended prioritizing costly, statefunded residential facilities for the most serious offenders; expanding effective community services and strengthening supervision; and enhancing oversight and accountability. Most of the recommendations were incorporated into S.B. 393, which the House and Senate passed unanimously and Governor Earl Ray Tomblin (D) signed into law on April 2, 2015.

In addition to reducing the number of youth in residential placement facilities by at least 16 percent, S.B. 393 will allow West Virginia to invest its savings in effective, community-based alternatives to commitment. In the 2015 budget cycle, legislators made an initial appropriation of $4.5 million for such programs.

Adjudication: A judgment or decision of a court or jury regarding whether a youth was legally responsible for an offense. The juvenile equivalent of a finding of guilt or innocence.

Case: Any proceeding, action, cause, suit, lawsuit, or controversy initiated through the court system by filing a complaint, petition, or indictment.

Delinquency: Conduct by a juvenile that is subject to prosecution and would be criminal if committed by an adult, as opposed to a status offense (see below).

Disposition: A decision made by a judge regarding a guilty adjudication—the juvenile equivalent of sentencing. Possible determinations could include an improvement period (see below), probation, specialty courts, or commitment to Department of Health and Human Resources or Division of Juvenile Services custody.

Felony: The more serious of two categories of criminal offenses (see misdemeanor, below).

Improvement period: A pre- or post-adjudication term of up to one year with conditions calculated to serve a juvenile offender’s rehabilitative needs. If the conditions are fulfilled, the proceedings are dismissed.

Misdemeanor: The less serious of two categories of criminal offenses (see felony, above).

Out-of-home placement: A court-ordered disposition to a placement other than in the home of a parent, relative, or guardian, including to a foster family home, group home, nonsecure facility, emergency shelter, hospital, psychiatric residential treatment facility, staff secure facility, hardware secure facility, or detention facility.

Probation: A disposition to community supervision, which may include periodic reporting to a supervisory officer, participation in behavior change programming, payment of victim restitution, and regular drug tests.

Referral: A charge of a status or delinquent offense that is sent to the court but not yet filed. Referrals can be addressed informally or can go through formal processing steps and become a case. Status offense: Conduct that would not be a crime if committed by an adult but for which juveniles may be adjudicated, including truancy, curfew violations, incorrigibility, running away, and underage possession and/or consumption of alcohol or tobacco.

This important piece of legislation puts our kids first, and I’m confident it will improve outcomes for West Virginia youth and their families, increase accountability for juveniles and the justice system, and protect both public safety and the state’s finances.Governor Earl Ray Tomblin (D)

In June 2014, Gov. Tomblin and leaders from the judicial and legislative branches established the Intergovernmental Task Force on Juvenile Justice. The bipartisan 30-member group included the governor’s designee as chair, legislators from both chambers and both parties, law enforcement officials, judges, agency leaders, a representative of the faith community, a prosecutor, a public defender, and others.

The task force was charged with conducting a comprehensive review of the state’s juvenile justice system and developing consensus-based policy recommendations to protect public safety by improving case outcomes, enhancing accountability for juvenile offenders and the system, and containing taxpayer costs by targeting resources toward the most serious offenders. The Pew Charitable Trusts and its partner, the Crime and Justice Institute at Community Resources for Justice, provided technical assistance as the task force collected and analyzed information about West Virginia’s juvenile justice system and formulated new policies and practices.

In December 2014, the panel delivered its policy recommendations in a final report to the governor, the president of the state Senate, the speaker of the House of Delegates, and the justices of the Supreme Court of Appeals.

The task force examined how West Virginia’s juvenile justice system was performing and whether it was aligned with the research about what works. It made several key findings:

Referrals to court for status offenses—behaviors that would not be crimes if committed by adults—increased 124 percent between 2002 and 2012. During the same period, the number for delinquent offenses—which would be crimes if committed by adults—declined 53 percent. In 2012, truancy accounted for 74 percent and 40 percent of status offense and all juvenile court referrals, respectively, while nonviolent offenses (67 percent) and misdemeanors (76 percent) dominated those for delinquency. (See Figure 2.) 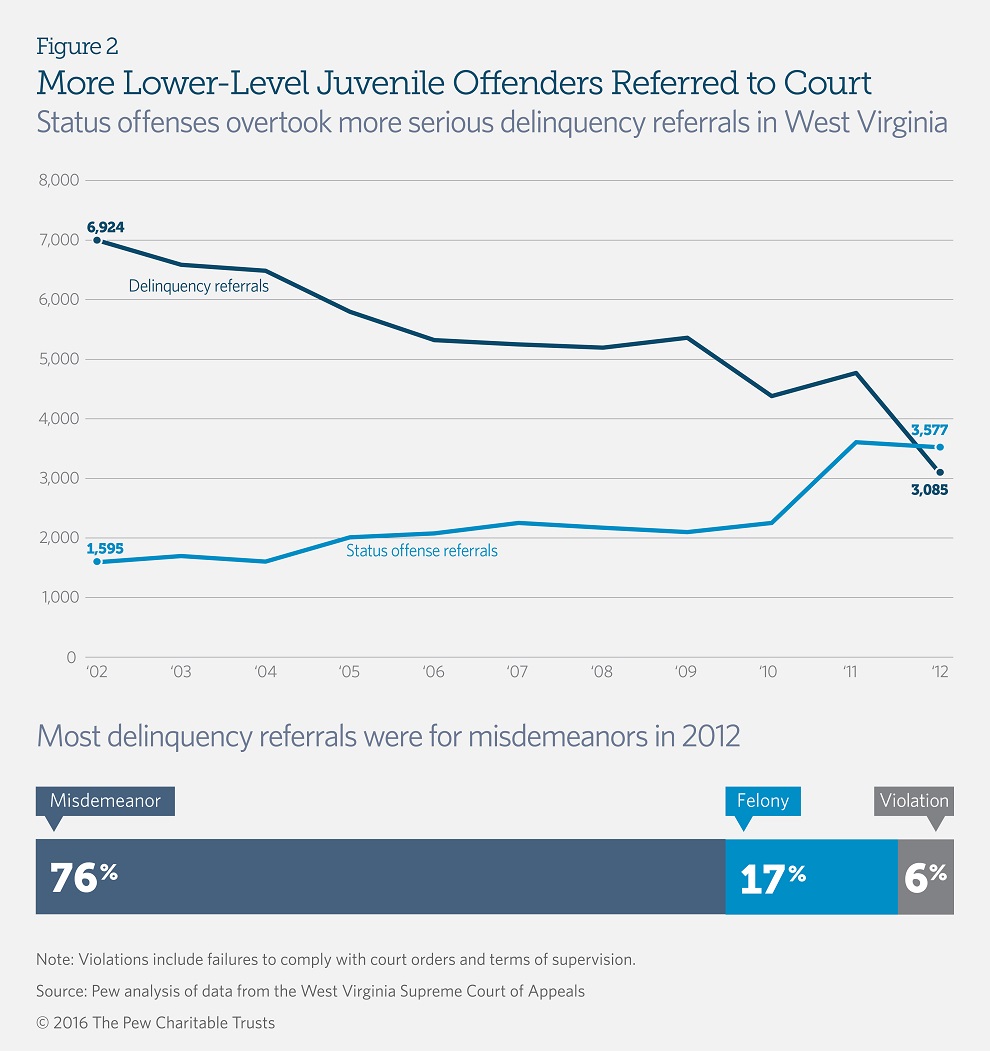 Many in state-funded facilities are low-level offenders

Research demonstrates that for many juvenile offenders, lengthy and expensive out-of-home placements in secure correctional or other residential facilities fail to produce better outcomes than alternative sanctions and that such placement can even increase recidivism. In West Virginia, youth who committed misdemeanors, probation violations, and status offenses made up an overwhelming share of those placed in the custody of DHHR or committed to DJS and sent to state-funded residential facilities.5 More than half (51 percent) of the juveniles placed out of home by DHHR in 2012 were status offenders—an increase of 255 percent from 2002— while misdemeanants accounted for another 24 percent. Of the youth committed to DJS custody in 2012, misdemeanants and probation violators made up 41 percent and 16 percent, respectively. (See Figure 3.)

Further, many youth placed in out-of-home settings were first-time offenders: About half of status offenders and delinquent youth placed in DHHR residential facilities in 2012 had never been arrested or referred to court. In addition, 82 percent of the youth placed in a residential diagnostic facility operated by DJS—and used as a location to evaluate youth before their dispositions are determined by the courts—had minimal prior history.6 More than half of the youth ordered to the diagnostic facility were released home without being placed into DHHR or DJS custody, after spending months out of home to be assessed. 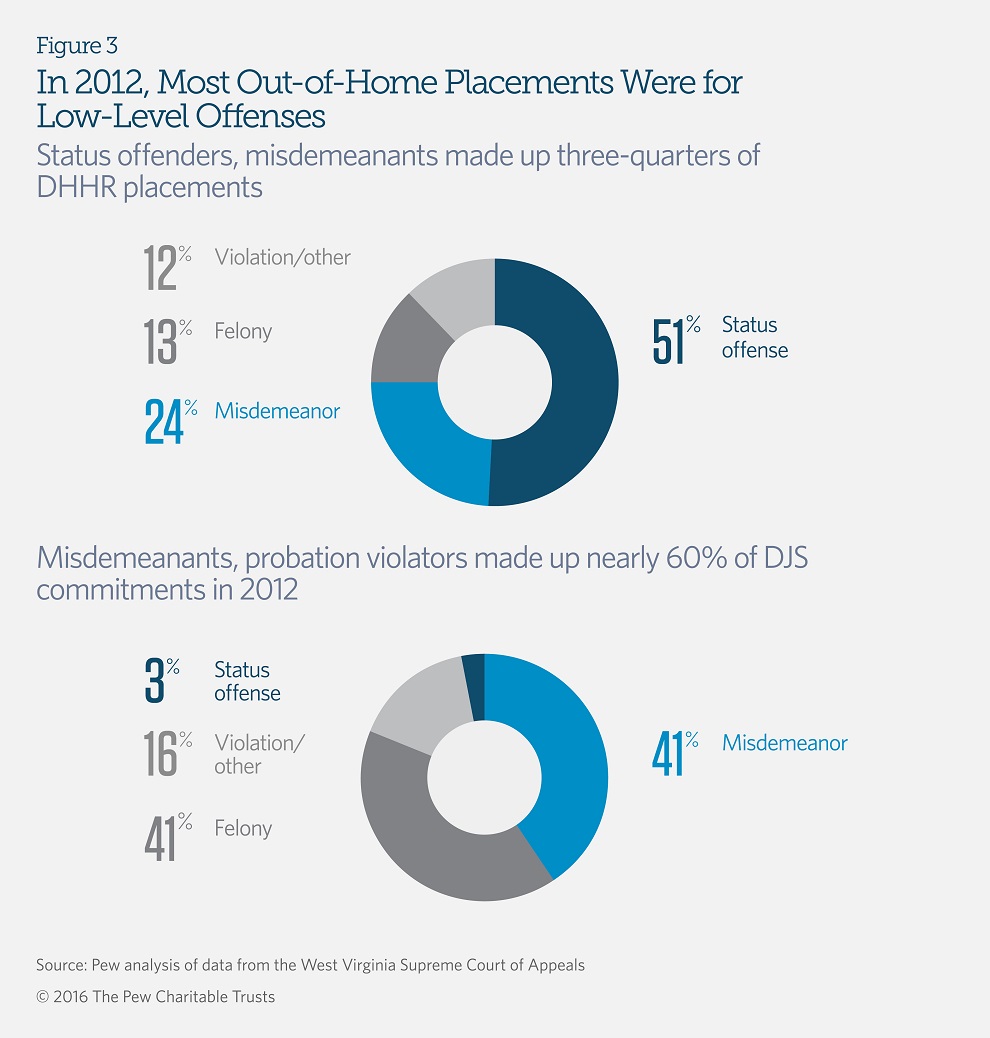 Long and growing stays away from home

Status and juvenile offenders in DHHR-funded residential facilities also were spending more time away from home. From 2003 to 2013, the average length of stay rose 22 percent (to 14.5 months) for status offenders, 23 percent (to 16 months) for misdemeanants, and 22 percent (to 19.7 months) for those adjudicated guilty of felonies. (See Figure 4.) In 2013, youth spent an average of 12 months at in-state facilities—about the same as a decade earlier—while those sent to state-funded out-of-state facilities spent an average of 23 months, up 40 percent from a decade earlier. 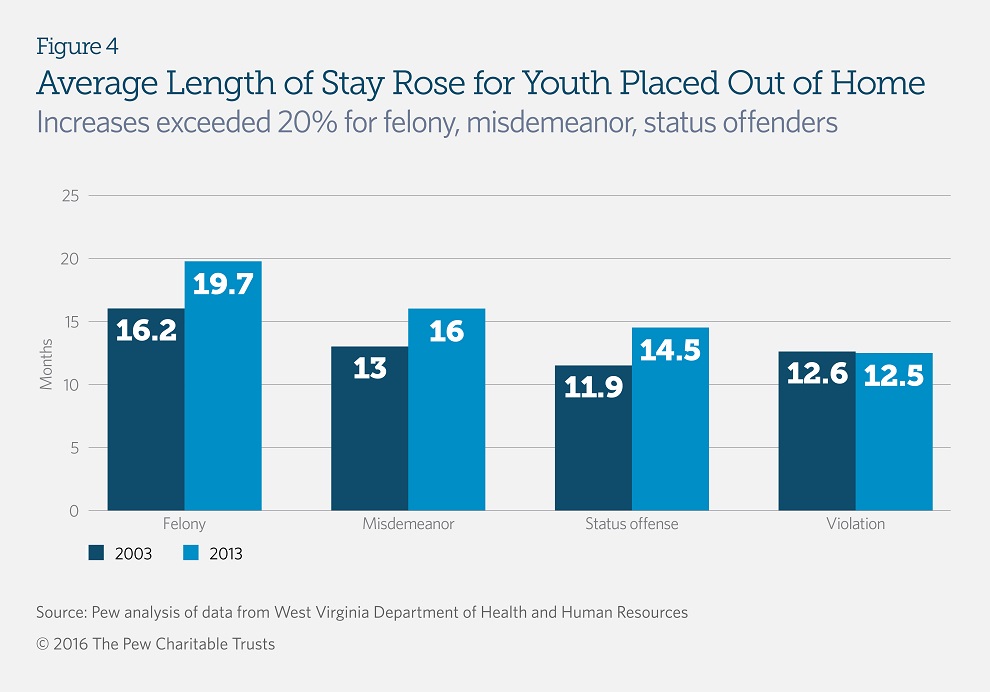 Many communities lacked services for youth in the juvenile justice system. In a survey of probation officers, 80 percent of respondents reported gaps in treatment or other services in their counties. According to the respondents, the greatest need for additional services was in education, substance abuse treatment, family conflict, mental health, and anger management. In addition, youth reporting centers—DJS-operated programs that provide community-based services and treatment to juveniles—operated in only 12 of West Virginia’s 55 counties, with only seven of the centers offering education services. Also, privately run comprehensive behavioral health centers, which are partially state-funded regional service providers, were located in only 13 counties, and respondents reported long wait times and limited access.

Inconsistent use of risk and needs assessments

In jurisdictions that use evidence-based practices, risk and needs assessments allow authorities to match offenders with appropriate sanctions and services. Across West Virginia, jurisdictions were using risk and needs assessments inconsistently. DHHR, for example, did not use the same tool as DJS and juvenile drug courts, and no tool had been validated for West Virginia’s juvenile population. In addition, the state had not provided structured, statewide guidance about how assessment results should inform decision-making.

West Virginia agencies gathered outcome data inconsistently, and as a result, the state did not have sufficient information about recidivism rates for youth exiting residential facilities or those on probation or parole. State agencies also often failed to share data. 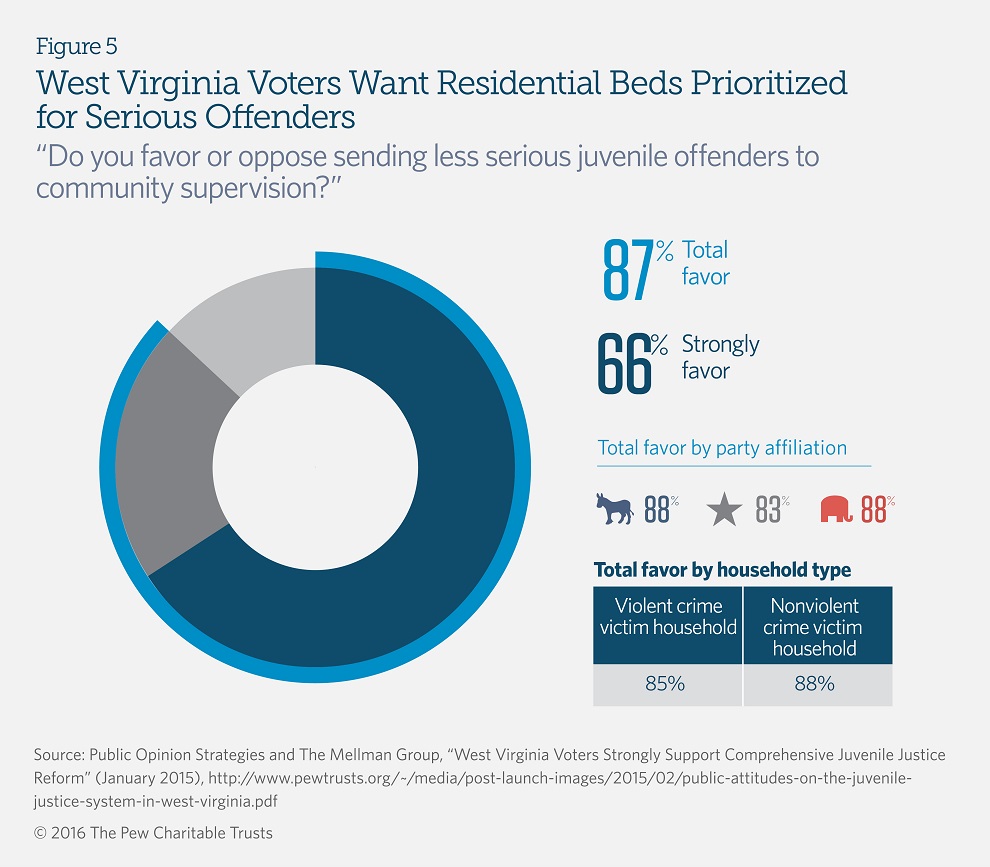 The task force reached consensus on a comprehensive set of policy recommendations to be considered by the Legislature. Lawmakers incorporated most of the proposals into S.B. 393, which passed the state House and Senate unanimously. The law is projected to reduce the number of youth in residential placement within DHHR and committed to DJS custody by at least 16 percent by 2020, avoiding $20.1 million in expected costs. The state also appropriated $4.5 million in the 2015 state budget to fund truancy diversion programs, additional youth reporting centers, evidence-based pilot programs, and improved data collection and training.

Lawmakers did not adopt the task force’s recommendations to eliminate out-of-home placement for first-time status offenders, lower-level misdemeanants, and technical probation violators and to provide alternatives such as community-based programs to improve outcomes. Had those measures been implemented, the entirety of the task force’s recommendations would have cut juvenile residential placements by at least 40 percent by 2020, while avoiding $59 million in expected costs.

Prioritize state resources for the most serious youth offenders

Concerned citizens from both sides of the political spectrum have led the effort for juvenile justice reform in West Virginia. They are to be commended for S.B. 393, which is an important step toward a better juvenile justice system.Charleston Daily Mail editorial, March 5, 2015