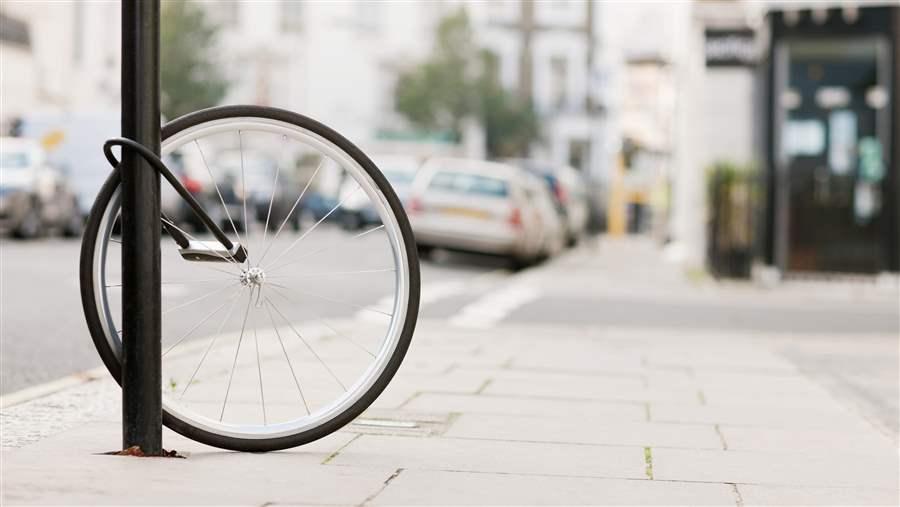 This brief was updated Feb. 24, 2017, to correct the count of states that changed their thresholds as of 2014 and to revise the associated calculations.

Since 2001, at least 35 states have raised their felony theft thresholds, or the value of stolen money or goods above which prosecutors may charge theft offenses as felonies, rather than misdemeanors.1 Felony offenses typically carry a penalty of at least a year in state prison, while misdemeanors generally result in probation or less than a year in a locally run jail. Lawmakers have made these changes to prioritize costly prison space for more serious offenders and ensure that value-based penalties take inflation into account. A felony theft threshold of $1,000 established in 1985, for example, is equivalent to more than twice that much in 2015 dollars.2 Critics have warned that these higher cutoff points might embolden offenders and cause property crime, particularly larceny, to rise.3 To determine whether their concerns have proved to be true, The Pew Charitable Trusts examined crime trends in the 28 states that raised their felony theft thresholds between 2001 and 2011, a period that allows analysis of each jurisdiction from three years before to three years after the policy change. Pew also compared trends in states that raised their thresholds during this period with those that did not. This chartbook illustrates three important conclusions from the analysis: 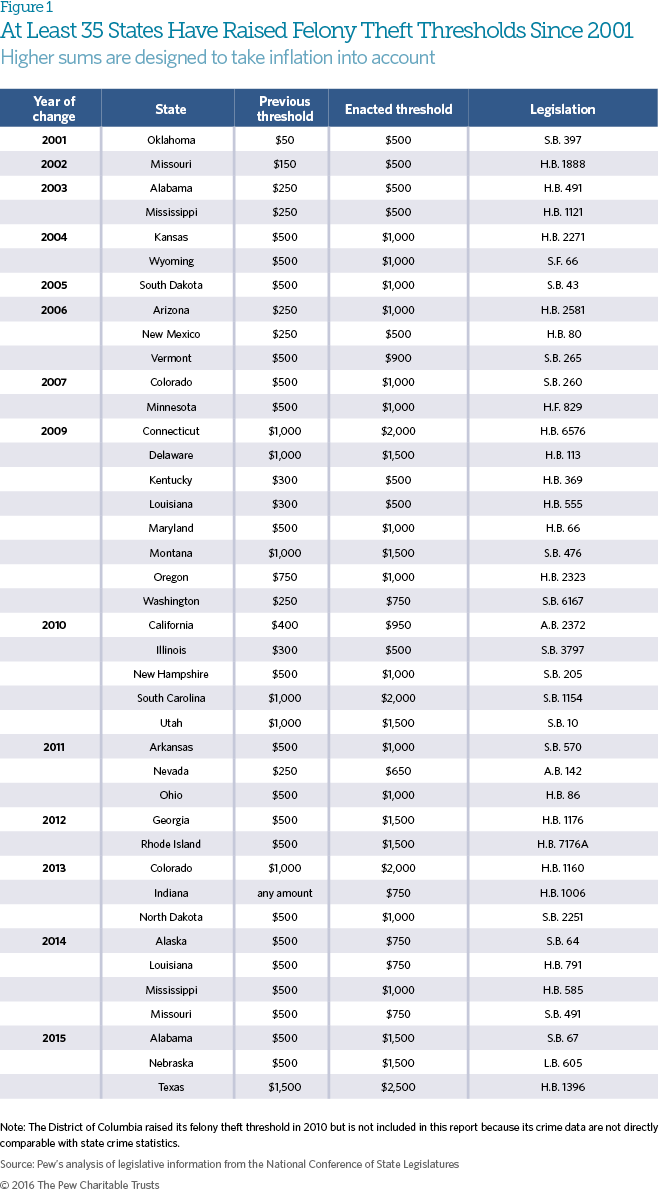 Since 2001, at least 35 states have raised their felony theft thresholds, including five that did so twice.4 In terms of percentage, Oklahoma’s tenfold increase, from $50 to $500 in 2001, was the largest in the nation. 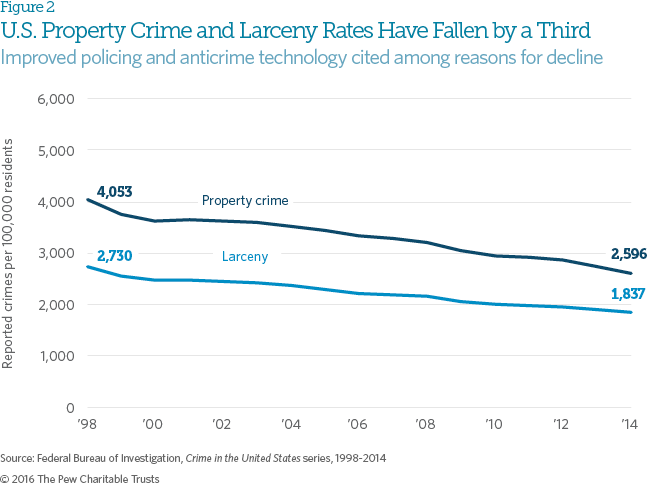 Changes in state felony theft thresholds have not interrupted the long nationwide decline in property crime and larceny rates that began in the early 1990s. The U.S. property crime rate fell 36 percent from 1998—three years before Oklahoma enacted the first of the state threshold hikes included in this analysis—to 2014, the most recent year for which data are available.5 The U.S. larceny rate fell 33 percent during that span.6

Experts attribute the nation’s sustained drop in violent and property crime rates to a host of factors, including better policing; the increased incarceration of certain repeat offenders; an expansion in private security personnel; an aging population that is less prone to criminal behavior; and technological advances, such as the widespread use of surveillance cameras, car- and home-alarm systems, and digital transactions that have reduced the need for cash.7 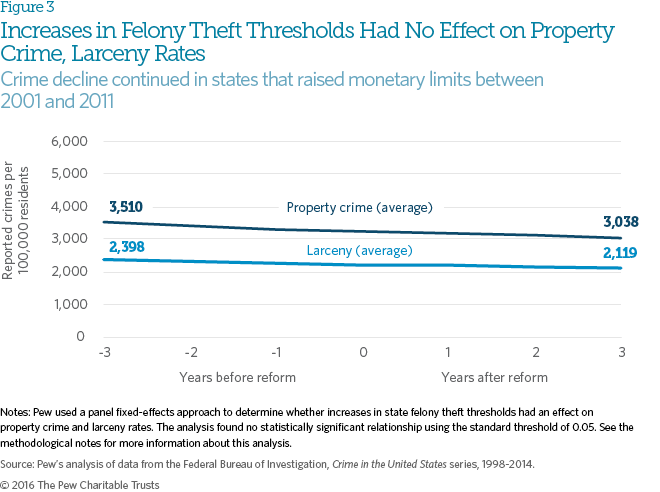 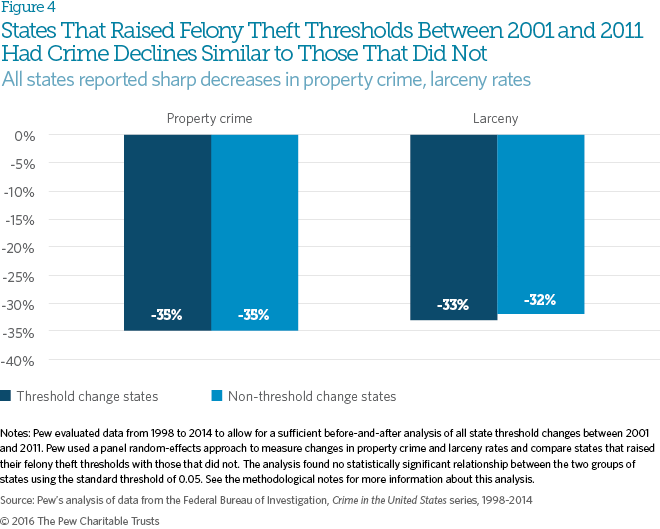 When comparing the 28 states that raised their felony theft thresholds between 2001 and 2011 with the 22 that did not, property crime rate declines were virtually identical, while larceny rates fell slightly more in the former group, although the difference was not statistically significant. 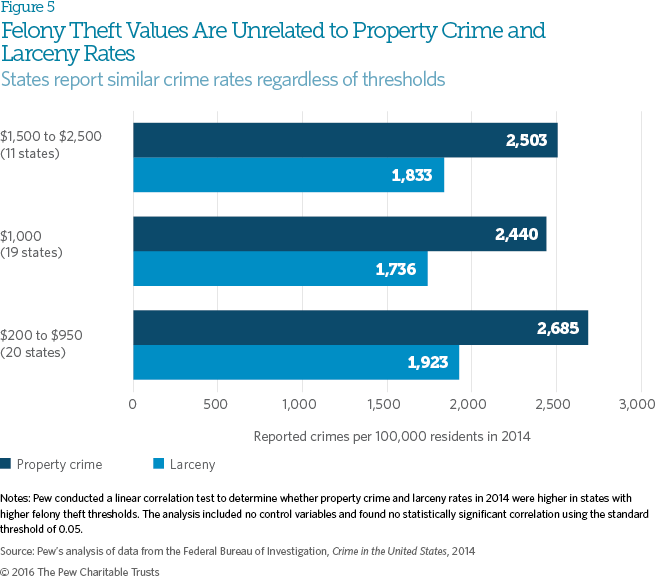 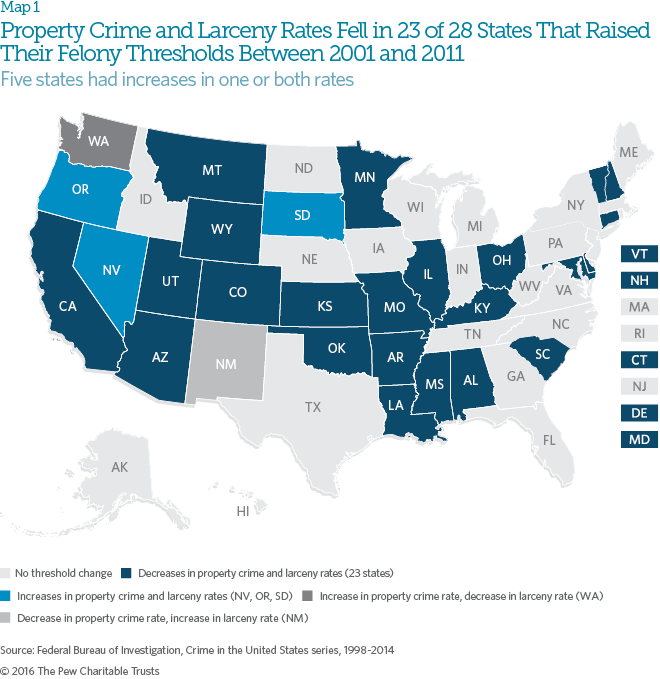 An examination of long-term trends in property crime and larceny rates shows year-over-year fluctuations within many of the 28 states that raised their felony theft thresholds between 2001 and 2011. Nevertheless, for all but five of the 28 states—Nevada, New Mexico, Oregon, South Dakota, and Washington—property crime and larceny rates were lower in 2014 than in the year in which each state raised its threshold.8