On March 31, Utah Governor Gary Herbert (R) signed into law sentencing and corrections legislation that employs research-driven policies to deliver a greater public safety return. The state’s Commission on Criminal and Juvenile Justice, an interbranch group of state and local officials, developed the legislation—H.B. 348—with technical assistance from The Pew Charitable Trusts as part of the Justice Reinvestment Initiative, a public-private partnership. The reforms are expected to eliminate almost all projected prison growth over 20 years, save more than $500 million, and redirect nearly $14 million into evidence-based strategies to reduce recidivism.

Although crime in Utah fell during the past two decades, the state’s prison population grew by 18 percent from 2004 to 2013, six times faster than the national average. Without changes to policies and practices, the state projected that its prison population would grow by 2,700 inmates, or 37 percent, by 2034, costing taxpayers more than $500 million. 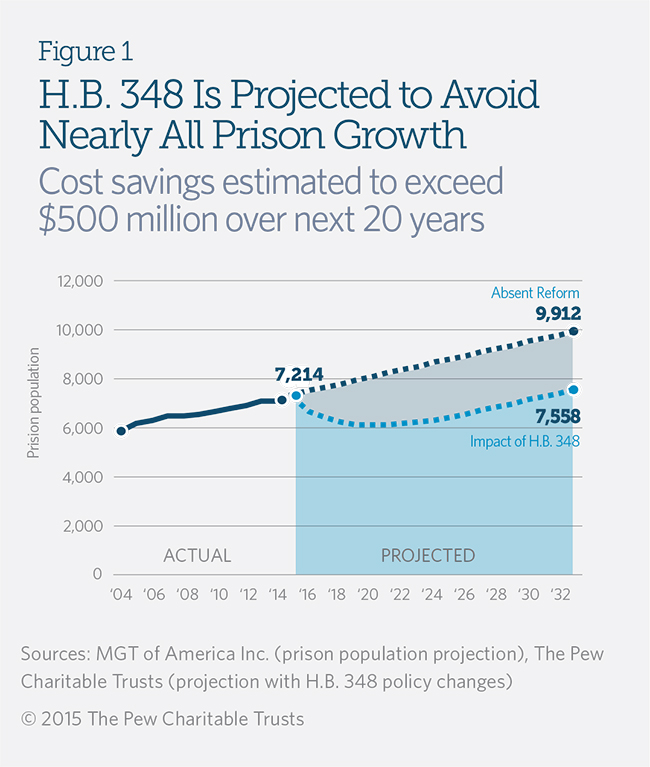 The commision conducted an extensive data review and found that the state sentenced more offenders to prison for drug possession than for any other crime in 2013.<><> The average time served rose 18 percent for all offenders from 2004 to 2013. In addition, the commission determined that probation and parole success rates had declined in the past decade and that offenders sent back to prison for violating supervision rules made up two-thirds of all prison admissions in 2013.<>

This package will enhance public safety and put the brakes on the revolving prison door. H.B. 348 will establish better treatment resources and alternatives for nonviolent offenders, ensuring our citizens get the best possible return on their tax dollars.”Governor Gary Herbert, April 9, 2015

Although Utah’s imprisonment rate remained below the national average and its crime rate fell over the past two decades, the state’s prison population grew by 18 percent from 2004 to 2013 and was projected to increase an additional 37 percent by 2034.

This anticipated expansion would have had a high price tag; in 2013 alone, the state spent $269 million on corrections. Additionally, the state was grappling with the possible relocation of its largest prison, projected to cost taxpayers more than $1 billion, with at least half of the cost tied to expected increases in the incarcerated population.

The commission also found that Utah taxpayers were not receiving a public safety benefit commensurate with their corrections expenditures: Almost half of inmates (46 percent) released from state prisons returned within three years, and offenders on probation and parole were failing at higher rates than they did 10 years earlier. Offenders returned to prison for violating the terms of their supervision accounted for 67 percent of prison admissions in 2013.2

Commission on Criminal and Juvenile Justice

Gov. Herbert, Chief Justice Matthew Durrant, Senate President Wayne Niederhauser, then-House Speaker Becky Lockhart, and Attorney General Sean Reyes directed Utah’s Commission on Criminal and Juvenile Justice to develop policy recommendations to reduce recidivism and hold offenders accountable while controlling the state’s prison spending. From April through November 2014, the commission—which included representatives from corrections, law enforcement, the Legislature, the judiciary, prosecution and defense, behavioral health, and victim advocacy groups (see list of members in the brief)—conducted a rigorous review of Utah’s sentencing and corrections data, policies, and programs, as well as best practices and models from other states. It also received input from a wide variety of stakeholders through six public hearings across the state and two roundtable discussions with crime victims, survivors, and advocates—one in Salt Lake City and one in St. George—which were preceded by specific outreach to representatives from tribal and rural communities.

Pew and its partner, the Crime and Justice Institute at Community Resources for Justice, provided the commission with technical assistance, which included analyzing Utah’s sentencing and corrections data and systems, developing policy options, and educating the public and policymakers about the recommendations. This assistance was provided as part of the Justice Reinvestment Initiative, a public-private partnership between Pew and the U.S. Department of Justice’s Bureau of Justice Assistance.

The commission identified three principal factors that contributed to the growth in Utah’s prison population:

Nonviolent offenders made up almost two-thirds (62 percent) of those sentenced to prison for new criminal convictions in Utah in 2013. Seven of the 10 most common offenses leading to incarceration were nonviolent, led by possession or use of a controlled substance. (See Table 1.) Further, from 2004 to 2013, prison admissions for certain nonviolent offenses increased substantially. The number of offenders sentenced to prison for retail theft, such as shoplifting, surged 325 percent, while admissions in three other categories—theft, theft by receiving stolen property, and possession with the intent to distribute a controlled substance—also increased by 15 percent or more.

Likewise, most offenders who returned to incarceration as a result of probation or parole revocation had previously committed nonviolent offenses. In 2013, 83 percent and 72 percent of revoked probation and parole violators, respectively, were originally sentenced for nonviolent offenses. 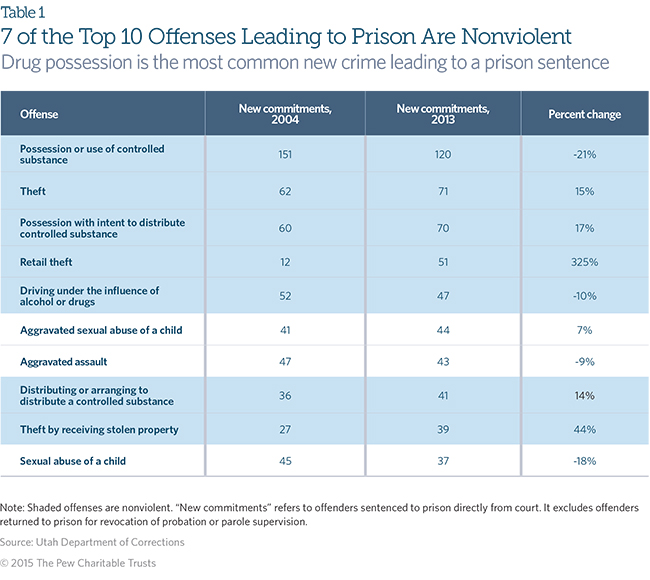 The primary driver of recent prison growth in Utah was the increased time that offenders remained behind bars. Over the past decade, the average time served by offenders sentenced to prison—excluding those revoked from probation or parole—increased by 20 percent, or 6.3 months. Length of stay increased across all offense types, from a 2 percent uptick for drug offenses to a 26 percent rise for property crimes. (See Figure 2.) 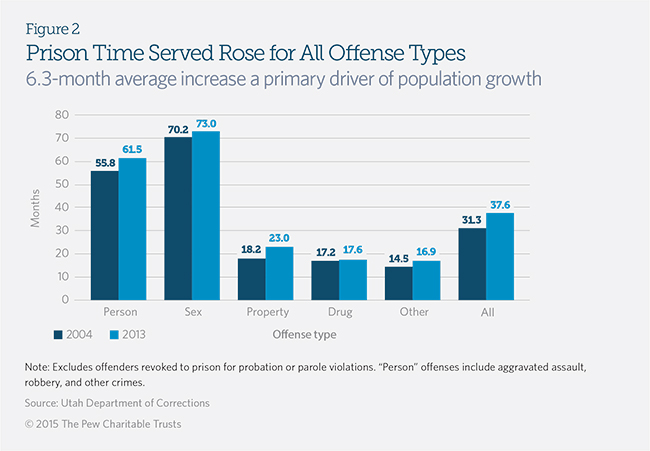 Two-thirds of offenders admitted to prison in 2013 were probationers and parolees who had violated the terms of their supervision. And nearly half of that group (43 percent) was revoked for technical violations, such as missing appointments with officers or failing drug tests, rather than for new convictions—up from 38 percent in 2004. Overall, 46 percent of Utah inmates are serving time for probation and parole revocations.

One reason for the low success rate may be a lack of adequate resources to support offenders. Utah’s Division of Substance Abuse and Mental Health estimated that current or former offenders represented more than 70 percent of people in need of substance abuse and mental health treatment in the state.3 The division also found that behavioral health treatment needs for Utah residents went unmet 58 percent to 95 percent of the time, depending on the region of the state. And often, when offenders did participate in community-based programs, those interventions were not supported by research or best practices. Many substance abuse and mental health providers in the state made no distinction between the general public and those involved in the criminal justice system, a practice that fails to address attitudes and behaviors prevalent among offenders.

In November 2014, the Commission on Criminal and Juvenile Justice unanimously adopted and presented to the Legislature 18 policy recommendations, which were subsequently drafted into legislation and introduced as H.B. 348: Criminal Justice Programs and Amendments. The bill passed 23-0 in the Senate and 67-2 in the House of Representatives.

The reforms included downgrading all first- and second-time drug possession convictions from felonies to misdemeanors and 241 misdemeanors to citations. The legislative effort also redirected nearly $14 million to public safety strategies and programs with higher returns on investment.

The legislation is structured around five primary objectives:

The law reflects a consensus that some nonviolent offenders can be supervised effectively in the community rather than sent to prison and that many more lower-level offenders can serve shorter periods of incarceration without jeopardizing public safety. Specifically, the law:

To expand and improve the tools available to the Department of Corrections and other agencies to change offender behavior and reduce recidivism, the law:

To reduce recidivism and incorporate evidence-based practices into probation and parole supervision, the law:

To support evidence-based practices in local jurisdictions and reduce burdens on county jails, the law:

To help policymakers and criminal justice practitioners assess and manage the performance of Utah’s corrections system, the law:

To support the reforms in H.B. 348, Utah lawmakers invested almost $14 million in public safety programs recommended by the commission: