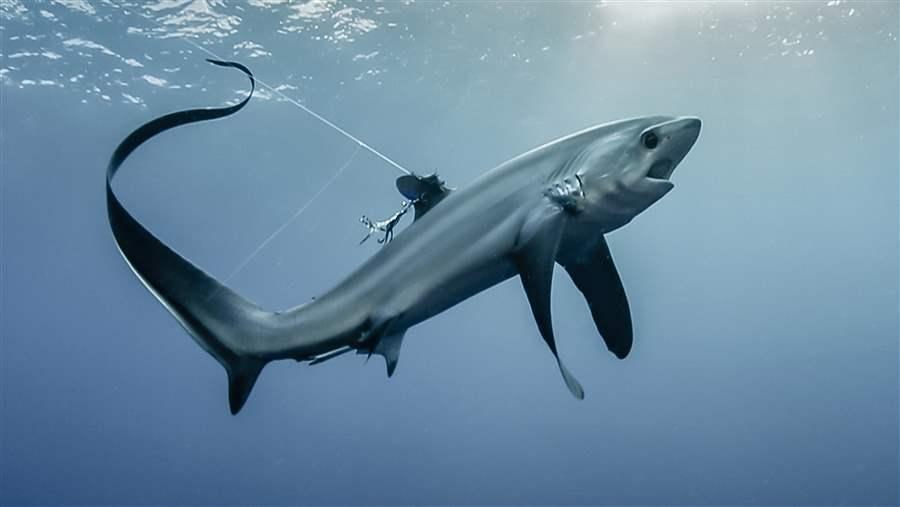 Protecting migratory marine species and their habitats is a critical component of efforts to ensure the health of the world’s oceans. The Convention on the Conservation of Migratory Species of Wild Animals (CMS) is uniquely placed to take on this task.

At this 11th Meeting of the Conference of the Parties to CMS (COP11), The Pew Charitable Trusts urges that progress be made to advance the conservation of migratory shark and ray species, raise the importance of networks of marine protected areas for migratory species, reduce marine debris, and improve the overall functioning and effectiveness of the Convention.

Pew sees the listing of additional shark and ray species on the CMS Appendices as the top priority for COP11. Listings that encourage coordinated management to conserve species are an essential response to the severe population declines suffered by migratory sharks and rays worldwide—and the paucity of effective management in place to protect them. The governments of Egypt, the European Union, Costa Rica, Ecuador, and Fiji have

led the way by submitting proposals for listing the silky shark, three species of thresher shark, two species of hammerhead shark, the reef manta, and all species of mobulid ray for consideration.

Conservation of migratory sharks and rays

Pew calls on CMS Parties to adopt these proposals and, through Appendix I and II listings, to develop better international management for these rapidly declining species and strengthen domestic protections.

Overfishing is taking its toll on many shark populations around the world. In general, sharks grow slowly, mature late, and produce few young over long lifetimes. That leaves them especially vulnerable to overexploitation and slow to recover from depletion.

The demand for shark fins, meat, liver oil, and other products has driven declines in populations worldwide. It is estimated that more than half face some elevated risk of extinction due to overfishing: At least one-quarter of sharks and rays are threatened, and well over one-quarter are Near Threatened.1 Every year, about 100 million sharks are caught and killed in commercial fisheries, an unsustainable number.2 Whether this catch is unintended, unwanted, or highly sought after, the resulting effect on ocean ecosystems demands urgent action.

Sharks are at risk. Until measures are in place to ensure that the targeted and incidental catch of sharks is sustainable, their capture in fishing gear should be avoided and they should be released alive whenever possible.

Pew calls on all CMS parties to support adoption of the following proposals: 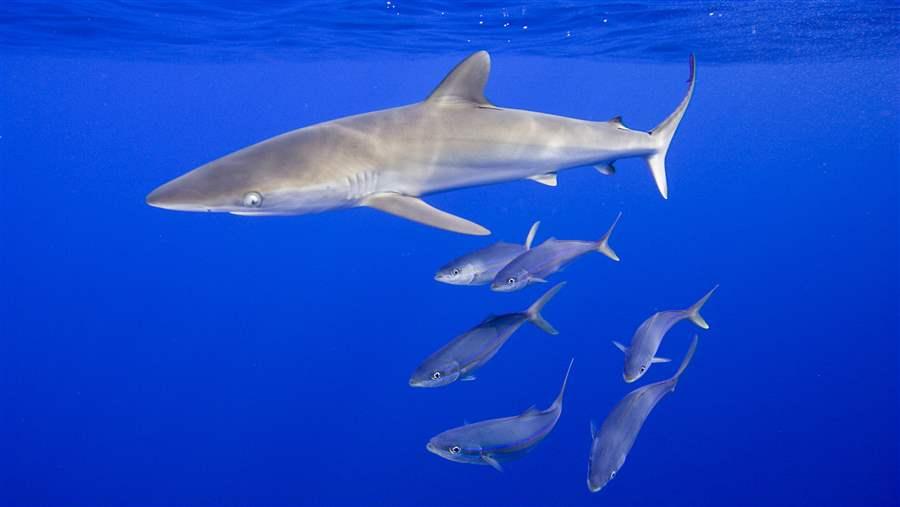 A silky shark swims near a fish aggregating device, or FAD, in the international waters of the Pacific ocean.

Advancing ecological networks to address the needs of migratory species

Pew encourages the Parties to adopt the draft resolution (Annex to UNEP/CMS/COP11/Doc.23.4.1.1) to advance the Convention’s work with respect to ecological networks and migratory species. It is essential that critical habitat sites for CMS-listed species be identified and included in protected-area networks—and that these networks extend to the high seas, beyond waters under national jurisdiction.

Migratory species are transboundary, by definition,13 and the pressures confronting them are also unconstrained. Their movements take them across national maritime borders and often into the high seas beyond. CMS Appendix I lists 27 species with ranges incorporating some portion of the high seas; another 53 are listed on Appendix II.14 But without sufficient means to protect these species and their habitats, CMS Parties will always be limited in their ability to fulfill the Convention’s promise.

This is a challenge highlighted by the Convention’s “Draft Global Gap Analysis,” which notes that these Areas Beyond National Jurisdiction (ABNJ) are key habitats for many migratory species. The analysis also observes that these areas “suffer from inadequate governance, affecting [their] conservation and sustainable use.”15

Protecting migratory species requires a holistic view,16 which must account for ranges that include the high seas. Yet there is no multilateral mechanism that coordinates and implements high seas protections. This hampers the work of CMS because the current framework of limited, fragmented, and sectoral protections fails to deliver ecological functionality17 at a global scale. A new implementing agreement under the United Nations Convention on the Law of the Sea could enhance CMS efforts by providing a mechanism to extend ecological networks into ABNJ.

Pew encourages the Parties to support negotiations over a new implementing agreement. It is not enough for the draft resolution on advancing ecological networks to express that Parties are “aware” of the ongoing deliberations on this issue or to request that they and the Secretariat convey their experiences to the United Nations working group on ABNJ.18 Instead, Parties must recognize an implementing agreement as a critical component in the effective operation of the CMS and support opening negotiations. The United Nations Ad Hoc Open-ended Informal Working Group to study issues relating to the conservation and sustainable use of marine biological diversity beyond national jurisdiction is likely to conclude in January 2015, so the time to act is now.

Pew encourages the Parties to support the draft resolution (Annex 1 to UNEP/CMS/COP11/Doc.23.4.6) on marine debris, including language on fish aggregating devices (FADs). The Parties should call attention to the increasing use of FADs as an unregulated source of marine debris from fishing vessels and act individually and collectively to monitor and control drifting FAD deployments. Currently, fishing entities can deploy an unlimited number of these devices on the high seas, yet they are not accountable for their loss. An estimated 100,000 FADs are deployed each year,19 often built with synthetic ropes and plastic webbing that descend as far as 100 meters below the surface. FADs that are not recovered drift freely, contributing to marine litter and entangling and killing migratory marine life. For example, an estimated 480,000 to 960,000 silky sharks die each year in the Indian Ocean in drifting FADs.20 In the eastern Pacific Ocean alone, between 300 and 500 threatened sea turtles are entangled each year as a result of the FAD fishery, often including Pacific loggerheads and olive ridleys.21 By calling for the monitored and controlled use of drifting FADs, the Parties can not only make significant progress toward stemming the increasing flow of derelict gear into the oceans, but also help protect vulnerable and threatened migratory marine species.

Pew welcomes efforts to help build a stronger CMS to enhance its effectiveness and enable it to deliver on its priorities.

Pew encourages Parties to adopt the CMS Strategic Plan for migratory species 2015–23. This sensible, coordinated, and coherent approach to conservation of migratory species sets out goals and targets. It ensures that CMS and its daughter agreements are properly joined up and mutually reinforcing, so they support the delivery of CMS objectives.

In addition, Pew welcomes Parties’ commitment to the Convention and its principles of providing protection for migratory species and their habitats. To help ensure implementation of CMS measures, we support efforts to enhance the effectiveness of the Convention by bringing compliance procedures in line with best international practices in other multilateral environmental agreements.