Note: This item was updated on June 10, 2015, to reflect action taken by the Mid-Atlantic Fishery Management Council.

A vast stretch of the U.S. continental shelf’s edge in the Atlantic Ocean contains submerged cliffs, canyons, and seamounts that are just now being explored. These features form essential habitat for hundreds of species adapted to the dark depths, including magnificent deep-sea corals that can live for centuries.

For millennia these organisms and their ecosystems remained largely undisturbed. But an increase in the use of destructive bottom trawling gear could destroy these fragile structures.

Regional fishery managers recognized the need to act and initiated a plan called “Amendment 16: Protections for Deep-Sea Corals.” This has the potential to establish the largest habitat protection area in the history of Atlantic fishery management.

Each exploratory dive reveals life in new and often unexpected places, and affords scientists a better understanding of the deep sea and its ecological importance.

Cold-water corals and their surroundings may be hidden from view, but they constitute critical habitat for a number of species, including commercially important shrimps, squids, monkfish, hake, tilefish, and flounder. They also contribute to marine biodiversity and to the overall integrity of ocean ecosystems.1

The long-term health of many of these species, and numerous prized fisheries, depends on the condition of seafloor ecosystems. In addition to their vital role as ocean habitat, deep-sea corals and the species that live with them may provide extraordinary benefits to human health in the future. Medical researchers have already found some deep-sea organisms that may aid in the development of promising cancer treatments and other potentially lifesaving products. 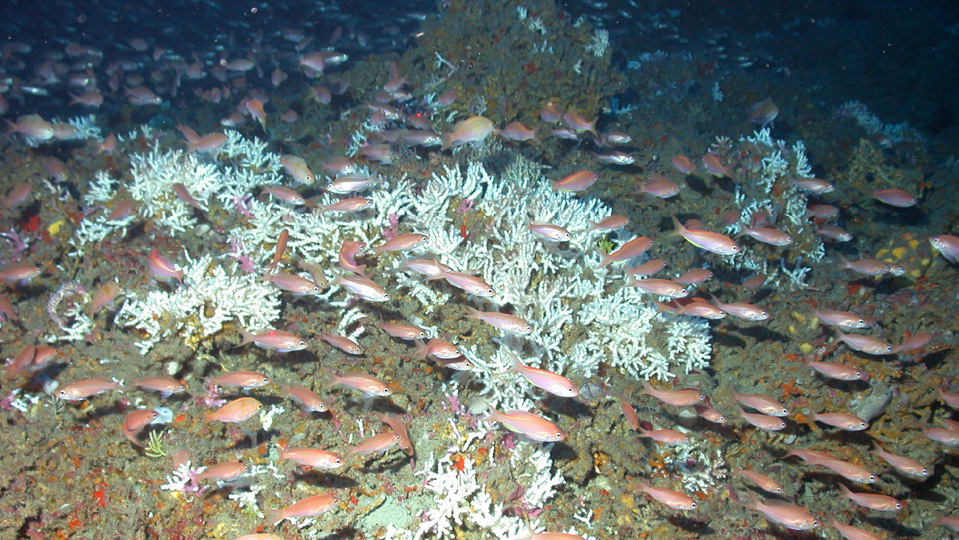 Unlike the more familiar coral reefs that form in shallow, sunlit waters, deep-sea corals are generally composed of solitary, fragile structures that filter nutrients from the passing currents. These corals are uniquely adapted to thrive in their environment, and some are among the oldest animals on Earth. But because they are stationary, they are particularly vulnerable to pollution and rapid changes in the ocean’s temperature. 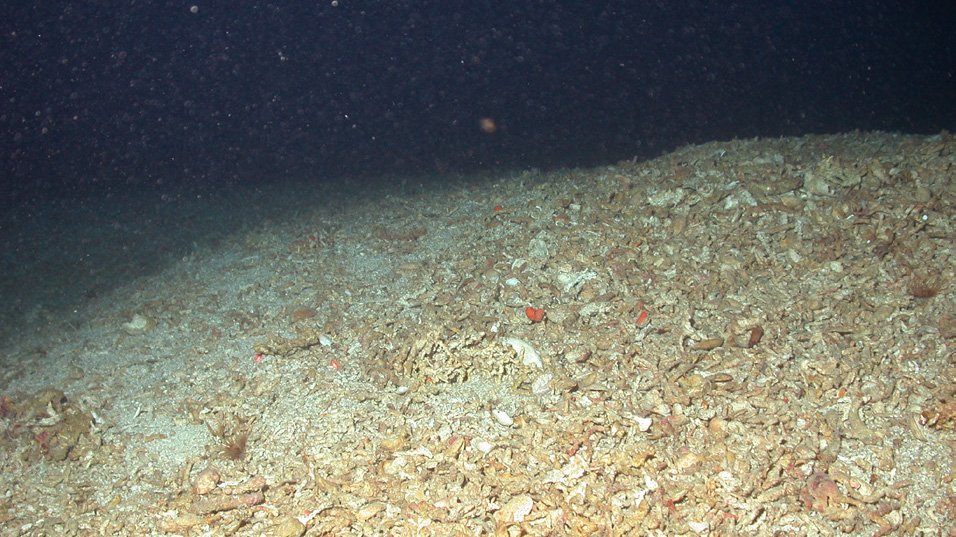 The greatest immediate global threat to deep-sea corals is bottom fishing. Explorations of mid-Atlantic waters have found that many areas of the seafloor remain in relatively healthy or even pristine condition, largely because their depth makes them inaccessible to most fishing technology used in those regions. Elsewhere in the world’s oceans, destructive bottom-fishing gears called “canyon busters” and “rock hoppers” have destroyed great swaths of cold-water corals. Destroyed, too, is any chance of understanding the many fragile creatures these structures sheltered.

Federal fishery managers are developing a range of alternatives to protect deep-sea corals, including “broad zones” that cover wide swaths of ocean bottom, and “discrete zones” that trace the canyon boundaries along the continental shelf slope. 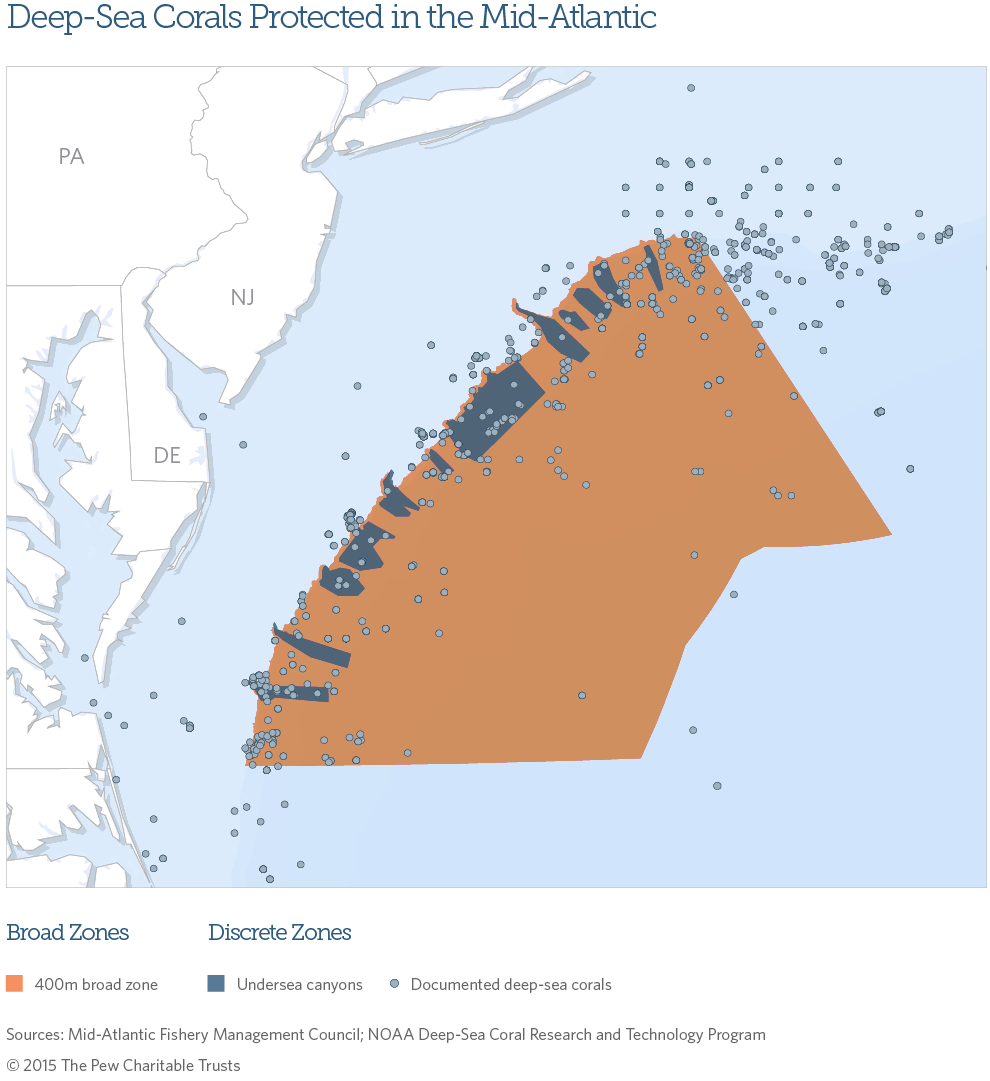 A chance to secure the “hidden treasures” of the mid-Atlantic

In 2013, the Mid-Atlantic Fishery Management Council decided to use its authority under federal law to proactively “minimize the impacts of fishing gear on deep-sea corals,” but it has not yet determined the extent of that protection. Research has shown the region’s corals are concentrated in some canyons and off the continental shelf at depths below 200 meters (about 660 feet). In these areas, bottom-scouring trawlers made nearly 3,500 hauls between 2000 and 2013.2 According to the National Oceanic and Atmospheric Administration, “Bottom trawling is widespread and considered the major threat to deep-sea corals.”3

The council’s plan, called Amendment 16, has the potential to establish the largest habitat protection area in the history of Atlantic fishery management. To fully protect corals this plan must include all of the canyons and deep regions that harbor these ecological treasures.

Please join us in urging the council to protect the hidden treasures of deep-sea corals. Preventing long-term damage in an area larger than New Jersey, Delaware, and Maryland combined would be an ecological legacy we could all be proud of.

Write to the Mid-Atlantic Fishery Management Council at: [email protected]