In 2013, following a legislative stalemate and facing growing public-sector pension fund liabilities, Kentucky lawmakers passed comprehensive legislation that is projected to improve the fiscal health of the pension system by billions of dollars, ensuring that state and local governments can keep their promises to Kentucky's public workers. The full reform package will create a new pension plan for anyone hired after Jan. 1, 2014, require that future cost-of-living adjustments be paid for before they are given (instead of occurring automatically), and include a plan that commits the Legislature to full funding of pension promises in future years. Accompanying legislation was passed that would raise an additional $100 million annually to help pay the estimated $131 million a year needed to make up the gap in Kentucky's pension contribution.

These reforms came about through an open, deliberative process led by a task force of House and Senate legislators from both sides of the aisle. The effort began in June 2012 and consisted of a series of public meetings that included testimony and suggestions from a range of Kentucky stakeholders representing public employees, taxpayers, business groups, and local governments. The Pew Charitable Trusts and the Laura and John Arnold Foundation served as unpaid advisers to this task force and provided independent analysis and actuarial support.

The task force agreed upon a set of recommendations to the Kentucky General Assembly that were the basis of the reform legislation, which passed in 2013 with wide bipartisan backing. Key provisions included a commitment to pay down the commonwealth's existing pension debt and policies to keep future costs from growing unmanageably.

In 2012, Kentucky had one of the worst-funded retirement systems in the country. The total unfunded liability in the pension plans covering employees other than teachers was $13.9 billion—more than the tax revenue the state collected that year. If Kentucky did not adopt comprehensive reforms, this growing liability would seriously jeopardize basic public services, the security of worker benefits, and the overall fiscal health of the state. (See Table 1.) 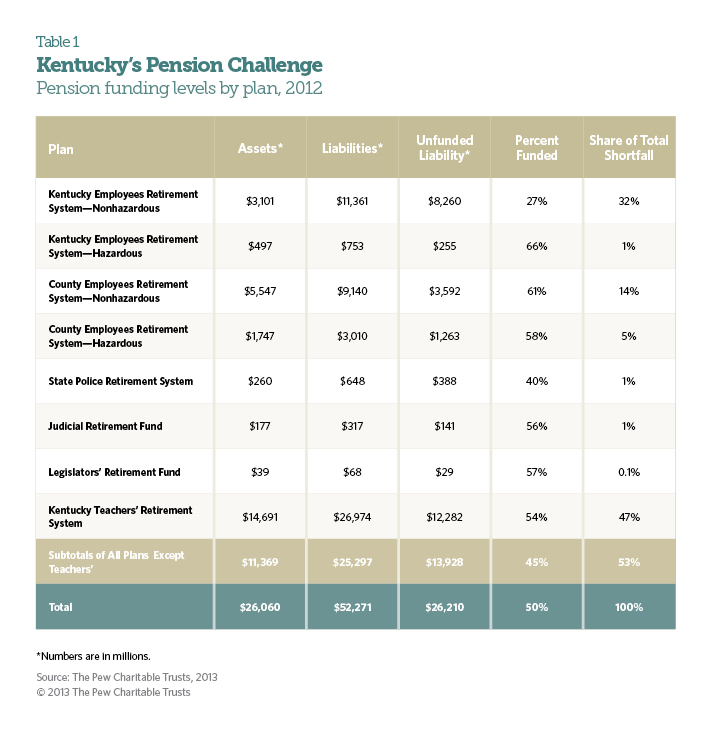 All told, Kentucky had accumulated more than $26 billion in pension debt. In 2002, the pension plan for state workers not in hazardous positions was 111 percent funded. Just a decade later, it was less than 30 percent funded, and it is currently one of the worst-funded state pension plans in the country. The other Kentucky Retirement Systems pension plans—covering city and county employees as well as state police and state employees in hazardous positions—were also in bad shape, with billions of dollars in total additional unfunded liabilities. As the state was skipping their pension payments, local governments in particular were struggling to keep up with their required contributions. (See Figure 1.) 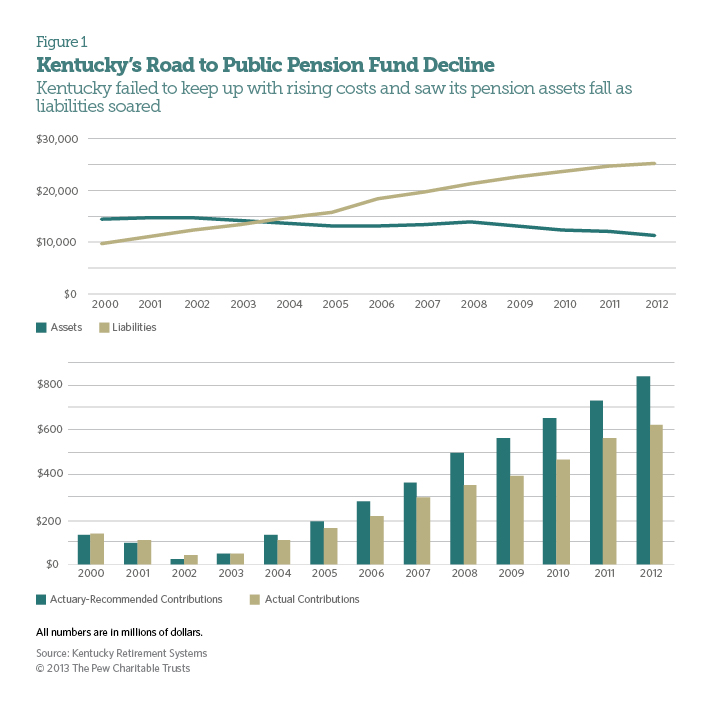 The unfunded liabilities the state faced were largely the result of policy choices made over the past decade. A combination of not making the required pension system contribution, and not paying for benefit increases, led to almost $14 billion in pension debt just for the Kentucky Employees Retirement System, which covers state government workers. Although the Great Recession of 2007-09 certainly made things worse, even before the downturn, the Kentucky Retirement Systems were only 68 percent funded and had a shortfall of more than $10 billion in 2007. (See Figure 2.) 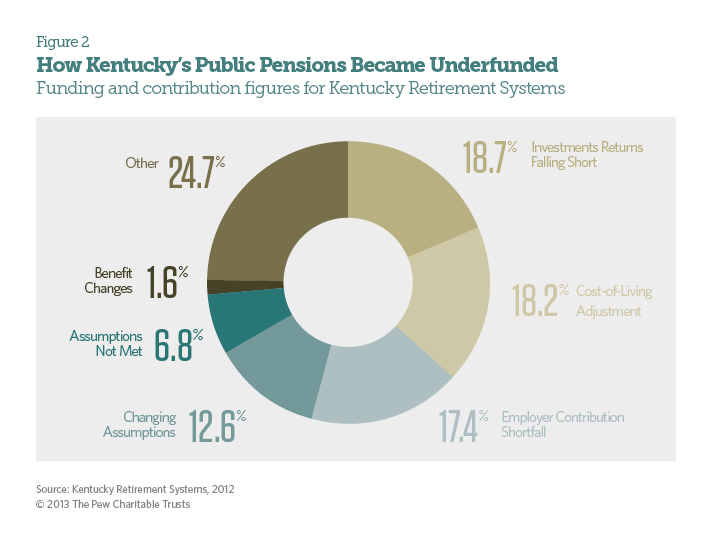 In early 2012, the state Legislature created the Kentucky Public Pensions Task Force to investigate the pension challenges and identify a path forward.1 For six months, this bipartisan group of legislators carefully considered the best approach to achieve meaningful reform that would resolve the Kentucky Retirement Systems' funding issues over the long run.

The task force undertook a deliberate, transparent, and open process in which numerous stakeholders (including public employees, taxpayers, business groups, and local governments) had the opportunity to contribute and ensure that the panel had a complete picture of the situation.2 Throughout this process, the task force heard a variety of options and ultimately identified a set of reforms that it felt best matched Kentucky's needs. The reforms passed the task force by a vote of 11-1, reflecting a compromise of different interests.

Background on the Kentucky Retirement Systems

Modifications to the systems have been made through the years, but the most significant change prior to the 2013 legislation occurred in 2008. Key changes applied to new employees hired after Sept. 1, 2008, included:

By 2013, pension contributions were $660 million. According to an actuarial analysis conducted by the Kentucky Retirement Systems, by 2020 the cost to state and local governments was projected to more than double to $1.37 billion and $3 billion by 2031. And for every dollar spent on worker pay, another 37 cents would have to go for pension promises. These costs threatened to cut into the growth of worker salaries and hiring, crowd out key public investments in education and other areas, and ultimately undermine the very solvency of the state's retirement system.

Each of these reforms was a critical improvement to Kentucky's pension policy.

For almost a decade, policymakers had regularly shortchanged the Kentucky Retirement Systems. The 2008 pension reform legislation was supposed to remedy the system's gaping funding deficiency, but only after a long ramp-up; the state was not required to make full payments until 2024. The 2013 reform committed the state to fully fund the public pension system beginning with the next biennial budget. According to state projections, $131 million in additional funding will be required to make the full pension payment in 2015.

Finding the extra money to make this increased pension contribution will require either raising additional revenue or spending less in other areas. Although the Legislature has a year before it will have to put together the budget for fiscal years 2015 and 2016, when reforms will begin, policymakers have already identified $100 million in annual revenue that will be used to fully fund the state's pension promises.5 For Kentucky's pension plans to be sustainable, consistent funding over the next 30 years is a necessity. The $100 million approved by the Legislature represents a strong commitment to funding the state's pension system going forward.

Offering long-term benefits to workers without paying for them is fundamentally unsustainable. Cities in the Kentucky Retirement Systems—such as Louisville and Lexington—had been making their required pension contributions in full each year. But their funding gap continued to grow, because each year the state-mandated cost-of-living adjustments, or COLAs, were not paid for, and the cost was simply added to the unfunded liability. From 2006 to 2011, these unfunded COLAs added $1.8 billion to Kentucky's state and local government pension debt.

Under the 2013 reform package, lawmakers can continue to offer COLAs to retired public workers as long as they are funded upfront. During each budget session, the retirement system will present the Legislature with the estimated cost of a 1.5 percent increase in benefit payments to each retiree. The system will also disclose whether the plan has sufficient surplus funds to pay for the increase. If it does not, then the Legislature will have to appropriate sufficient funds to pay for the benefit increase at the time it is given, or the increase will not be granted. This solution allows COLAs to be offered while also ensuring that unfunded benefit increases will not occur.

The goal of the Kentucky Public Pensions Task Force was not just to find a way to deal with the existing problems but to also look for a long-term solution—a way to keep the state's retirement promises affordable and sustainable. The approach chosen by policymakers included adopting a new retirement plan design—a cash balance plan—for those hired after Jan. 1, 2014. This hybrid approach to retirement savings combines aspects of both a traditional pension and an individual retirement account.6 Workers put money into individual accounts each year, as do their employers. The retirement plan professionally manages these investments and guarantees an annual return of at least 4 percent. If long-term returns exceed the guaranteed 4 percent, then the extra returns will be shared between employees and a rainy day fund within the pension plan to cover years when returns fall below the guarantee. And when a worker is ready to retire, the money in his or her account is converted to lifetime income in the form of an annuity.

The new hybrid cash balance plan was designed to cost the same as the old plan but to be more flexible if things did not go as expected.7 If all the assumptions were accurate, the benefits under the old plan were not estimated to be expensive. But as the past decade shows, these cost estimates were highly variable. When investment returns didn't match assumptions between 2005 and 2012, unfunded pension liabilities went up by $3.6 billion. But investment returns were not the only factor. Other actuarial assumptions about worker demographics and salaries also fell short, adding nearly $800 million in pension debt over this period.

The state's new hybrid approach provides a more predictable cost structure than the current plan by reducing the number of assumptions that policymakers must make to accurately project costs. Assumptions about employee turnover and salary growth, for example, are not required in a cash balance plan, because employee benefits accrue smoothly and are not based on a formula.

Kentucky's cash balance plan provides workers with the opportunity to reach a secure retirement by offering a portable benefit that grows evenly across their careers. Under the state's old pension plan, workers at the beginning of their careers accumulated very little retirement savings; only after many years in public employment did they accrue a meaningful retirement benefit. Yet most workers don't spend their entire career in one job, even in the public sector.8

Based on the retirement system's assumptions, a 35-year-old hired by the state of Kentucky has a 57 percent chance of leaving before age 50. If that worker left at age 50 with 15 years of service, the hybrid cash balance plan would provide a greater benefit than the old plan, a result of the more even accrual rate. A new worker who spends his or her full career in a public job will continue to receive a secure—albeit a somewhat smaller—benefit under the new plan. (See Figure 3.) 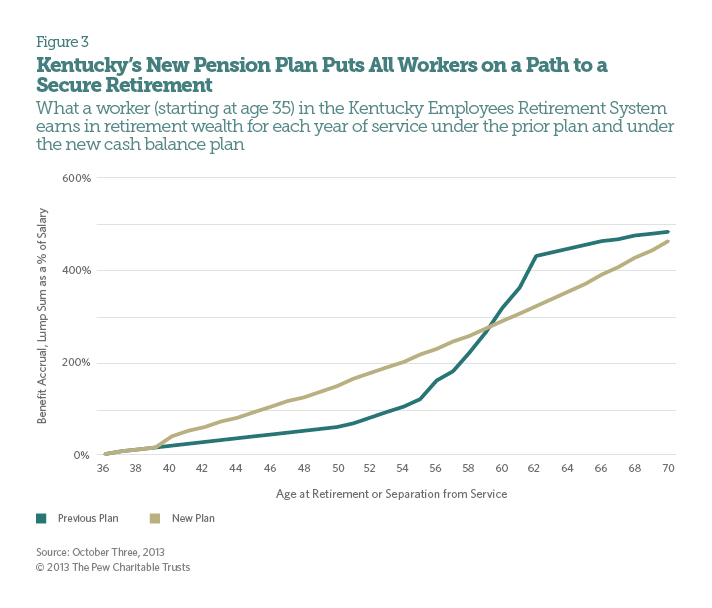 Kentucky's public pension challenges were years in the making, and it will be years before the Kentucky Retirement Systems are fully funded, even after enactment of the reforms of 2013. Policymakers need to maintain fiscal discipline to keep up with pension payments; without such discipline, no reform effort will ever be successful.

Collectively, the 2013 reforms were a major step toward making Kentucky's retirement systems affordable and sustainable while also keeping the promises made to public employees. Thanks to these reform efforts, the fiscal health of the pension system will be improved by billions of dollars, ensuring that state and local governments can keep their promises to Kentucky's public workers. Kentucky retirees can still receive COLAs, but now the increases must be paid for when they are given. And the new plan design will provide workers with a portable, secure retirement benefit while also making costs more predictable and sustainable.

We end this brief with the words of Governor Beshear at the signing of the new pension reform legislation:

"The recent legislative session offered a renewed spirit of cooperation and thoughtful discourse. That new atmosphere allowed us to reach a bipartisan agreement to solve the most pressing financial problem facing our state—our monstrous unfunded pension liability and the financial instability of our pension fund. Equally important, we worked out a way to create new revenue to pay our recommended General Fund contribution, without robbing funds from education.

"I thank the legislative Pension Reform Task Force for their hard work, which led to some critical changes in our pension system that will ensure its long-term reliability. I also thank our legislative leaders for their efforts to forge an agreement on funding that protects critical services like education from near-certain cuts due to the ballooning pension liability.

"As a result of this legislation, we fully honor the commitments made to state workers and retirees; address the financial uncertainty that threatened our state's credit rating; improve transparency and legislative oversight of the Kentucky Retirement Systems; and increase local government representation on its board. I'm proud to sign SB 2 and HB 440 into law." 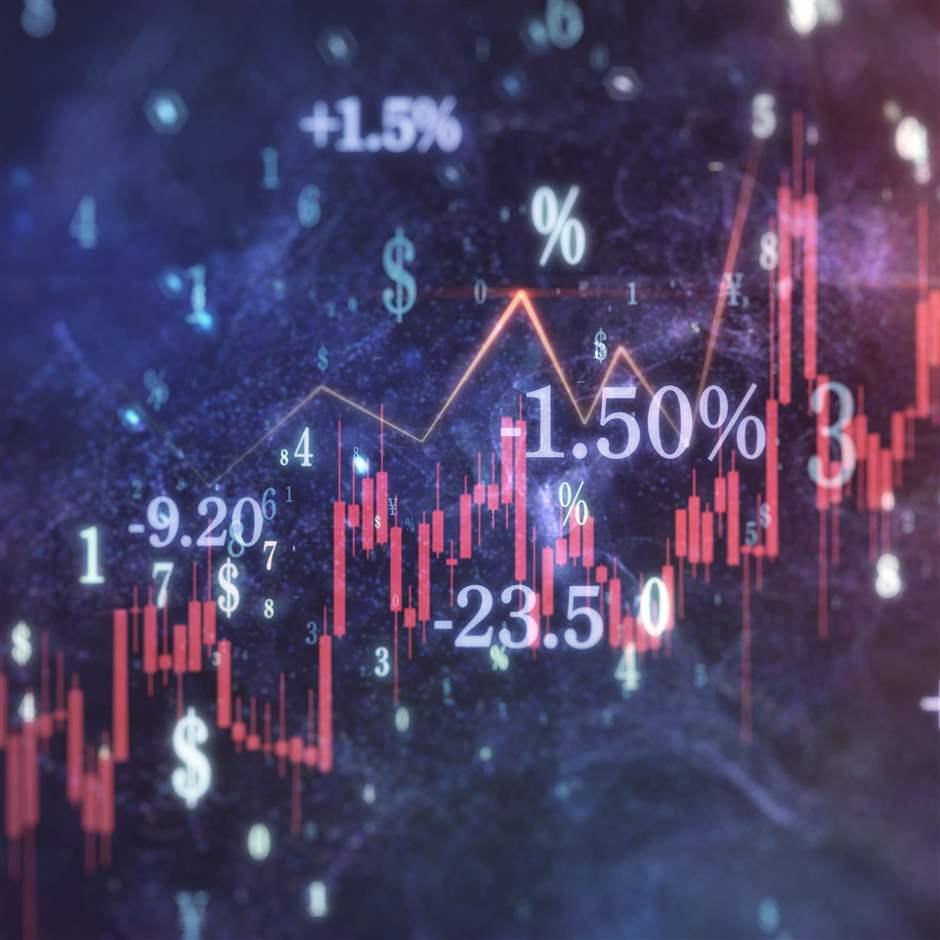