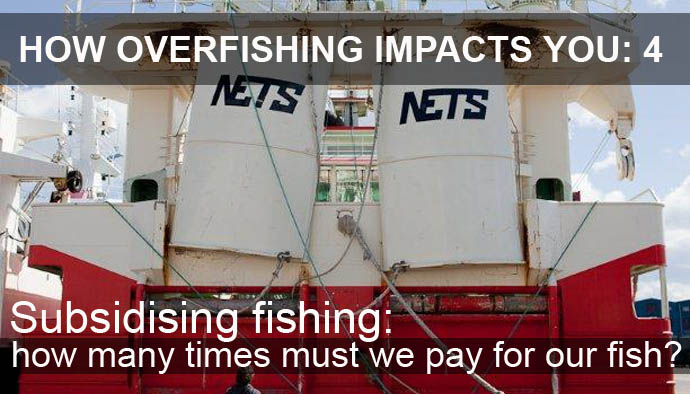 This briefing published by OCEAN2012 exposes how European citizens are footing the bill for overfishing. It is part of a series of briefings illustrating the impacts of overfishing on people or marine ecosystems caused by the excess removal of millions of tonnes of marine life every year.

This report is available in multiple languages. Download the complete document above.

When you buy your fish at the supermarket or fishmonger, you might think that's the only time you pay for your fish. Well, you would be wrong. This briefing exposes how Europeans are paying again and again for the same fish caught by EU vessels. OCEAN2012 reveals how much money, in the form of EU and member state aid is given to the fishing industry for dubious returns such as overcapacity of the fleet and overfishing of stocks.

How do subsidies work?

Subsidies reduce the cost of fishing while increasing the capacity of fleets to catch fish. Subsidised fleets often target overfished stocks with low profitability, and the lack of income is offset with public money. So, subsidies function as perverse incentives, artificially propping up unsustainable businesses and fuelling overfishing.

How much are subsidies costing us?

Between 2007 and 2013, EU funds alone will have subsidised the fishing industry by an estimated €4.3 billion. In one year (2009), the sector received about €3.3 billion in both EU and state aid. In the same year, the value of landed fish in 13 member states was lower than the value of the subsidies given to their fishers. Calculating roughly, from 2007 to 2012 more than €13 billion of taxpayers'money will have been spent subsidising the EU fishing sector.

Multiple dipping ... how many times are we paying for the same fish?

Although some inner workings of fisheries subsidies remain a mystery because a number of member states fail to meet EU reporting obligations, OCEAN2012 can still reveal several ways in which tax payers' pockets are picked to subsidise overfishing.

The first dip comes when we buy our fish – but our pocket is soon dipped into a second time when our taxes contribute to modernising fishing vessels that target overfished stocks. Between 2000 and 2008, €33.5 million subsidised the modernisation of bluefin tuna vessels that capture a species so overfished the International Union for Conservation of Nature lists it as endangered.

Our pocket is dipped into again when our government gives the fishing industry direct fuel subsidies, EU-sanctioned fuel tax exemptions, or indirect subsidies that use aid to help businesses meet rising energy costs. In 2009, just over €1.4 billion of taxpayers' money bolstered unprofitable segments of the industry in this way.

If our fish was caught by an EU-registered vessel in a third country's waters, our pocket takes another hit. Around 90 percent of the access fees paid to West-African countries like Mauritania or Guinea-Bissau came from EU taxpayers, with only the remaining 10 percent from vessel operators. In recent years the EU paid Morocco €36 million a year for 119 fishing permits (around €302,500 per EU vessel).

Finally, in a case of subsidy madness, some companies were paid taxpayers' money to modernise their fishing vessels, and when fish stocks were overfished and deteriorating– they were paid to scrap them. Between 1994 and 2006, 860 vessels benefitted like this, and in the worst case as few as 17 days passed between modernising and scrapping.

As if this isn't bad enough, criminal activity doesn't appear to stop public money being paid to some fishing operators. Investigators found links between convicted operators and subsidy payouts for vessels: between 1994 and 2006 over €20 million of taxpayers' money was paid to 75 vessel operators with prior fishing convictions.

There have also been vast payouts to Spanish fishing operators allegedly involved in global criminal syndicates. More than 80 percent of subsidised Spanish fishing companies that were fined, and which then lost court appeals, continued to be subsidised. One Spanish ship owner received more than €8.2 million in public money despite his company or affiliates facing more than 40 accusations of illegal fishing and US $5 million in fines.

Is there another EU industry sector receiving this kind of support in return for such negative returns?

The World Bank calculated that every year over €35 billion is lost to the world economy by overfishing, which totals more than €1 trillion in the last 30 years. By subsidising overfishing, we subsidise economic failure.

Research into the impact of subsidies on the ecological sustainability of North Sea fisheries suggests subsidies contributed to making some vessels less profitable. Between 1991–2003, the beam trawlers fisheries with subsidies lost around €1 million, whereas without subsidies these fisheries could have made about €21 million profit. How? Less fishing means lower costs i.e. less for fuel, less engine wear and tear, nets, crews, etc. When they fish less, the fish stocks have more time to recover and so there are fewer costs and less fishing can contribute to higher profits.

So, removing subsidies could:

What can you do about it?

In 2011, mainly due to poor data, the state of 64 percent of fish stocks in EU waters was unknown. Of those known, 63 percent of stocks were overfished, compared with a global average of 28 percent. In the Mediterranean, a staggering 82 percent of known stocks were overfished. North Sea catch limits for 2011 decided by EU Fisheries Ministers were on average 11 percent higher than scientific advice, while limits for the Irish and Celtic Seas and west of Scotland were 42 percent higher.

Despite subsidised reductions, the EU fishing fleet still has the capacity to fish two to three times the sustainable level. Between 2007 and 2013, the EU's European Fisheries Fund will have subsidised fishing and related industries with €4.3 billion. Fuel for fishing vessels is exempt from energy taxes, and State aid and EU-funded fisheries partnership agreements with non-EU countries also serve to subsidise fishing fleets and the fishing industry across the European Union.

Find out more about how overfishing impacts you in this series of OCEAN2012 briefings.

January 12, 2021 The Roadless Rule Is Good for the Tongass National Forest