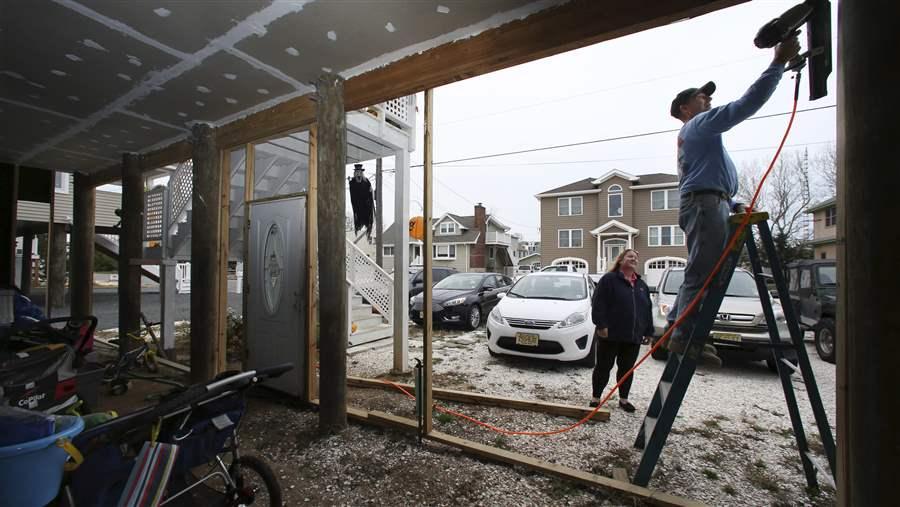 A couple rebuilds their house in Long Beach Township, New Jersey, after Hurricane Sandy in 2012.

Debates over federal disaster spending often focus on the Federal Emergency Management Agency’s (FEMA’s) Disaster Relief Fund, a primary funding source for disaster response and recovery. However, of the $255 billion in inflation-adjusted federal expenditures on disasters from fiscal years 2005-14, the fund accounted for only $111 billion, according to a September 2016 report by the Government Accountability Office (GAO).1 The remaining $144 billion, or 56 percent, was drawn from the budgets of 17 major federal departments and agencies.2

The Pew Charitable Trusts analyzed the Disaster Relief Fund (DRF) to better understand its role within federal disaster assistance provided to American communities. Specifically, the researchers looked at the importance of DRF funding to total disaster spending of the 17 federal entities identified by GAO as having “responsibility for leading or coordinating” disaster assistance; which programs and activities the fund supports; and how monies from the fund are distributed among agencies. The findings show that although vital, the fund is really only part of the federal government’s “all hands on deck” approach to disaster response.3 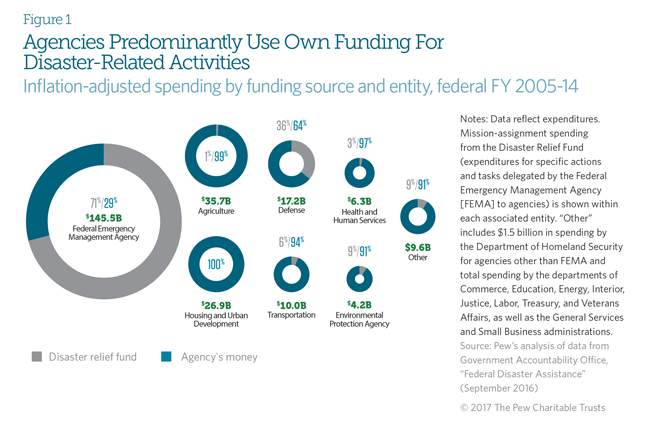 How important is the DRF to agencies’ disaster-related expenditures?

Disaster aid spending across the 17 agencies from fiscal 2005-14 ranged in real dollar terms from a low of $15 million by the Treasury Department to a high of $146 billion by FEMA, an agency in the Department of Homeland Security (DHS).4 These expenditures support dozens of programs, including the Interior Department’s Office of Wildland Fire and the Department of Housing and Urban Development’s (HUD’s) Community Development Block Grant Disaster Recovery Program. Five agencies—FEMA, Agriculture, Defense, HUD, and Transportation— accounted for 92 percent of total federal spending. However, in percentage terms, the share of disaster-related expenditures supported by the DRF varied widely, from just 0.2 percent for HUD to 71 percent for FEMA, indicating that the fund plays a significant role for specific departments and activities but is largely incidental for others. (See Figure 1.)

What programs do DRF funds support?

FEMA oversees DRF spending. The majority of these expenditures, 73 percent, were for grants and other direct financial assistance that FEMA provided to state and local governments and individuals affected by disasters from fiscal 2005-14. These included public assistance grants to state and local governments to repair and replace public infrastructure, and housing and crisis counseling aid to disaster victims through the individual assistance program. (See Figure 2.) FEMA distributed 8 percent of DRF dollars to 33 other federal departments and agencies for “mission assignments”—specific actions and tasks delegated by FEMA to provide assistance after a presidentially declared disaster.5 For example, mission assignments in 2012 directed various federal agencies to conduct debris removal and restoration of communication services, and to provide medical care for communities affected by Hurricane Sandy.6 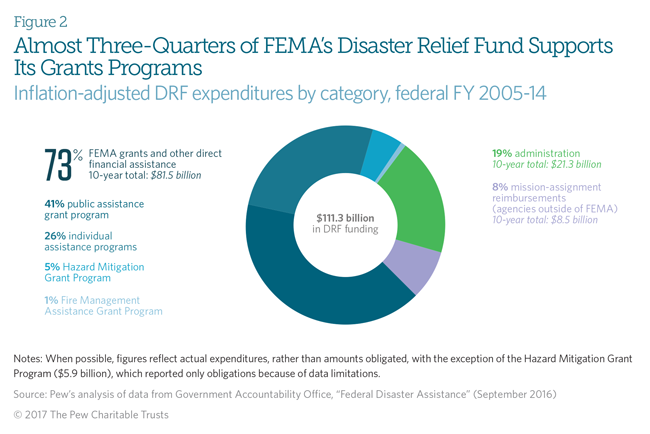 How is DRF funding distributed?

From fiscal 2005-14, the Department of Defense received the most DRF mission-assignment funding—more than $6.1 billion, primarily for the Army and the Army Corps of Engineers; DHS was a distant second at $614 million for agencies including the Coast Guard. The third-largest total, $573 million, went to the Transportation Department to cover such costs as those for the Federal Aviation Administration. The remaining funds were spread among 30 agencies. (See Figure 3.) 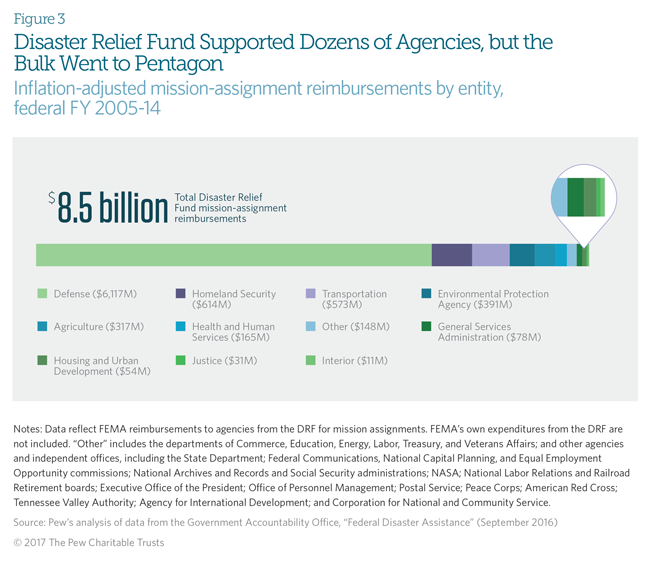 In Natural Disasters, States Lend Each Other a Hand

A week after Hurricane Harvey made landfall in southeastern Texas, at least 21 states had sent emergency response teams and equipment to help. Such interstate aid is coordinated through the Emergency Management Assistance Compact (EMAC), a mutual aid agreement among states. These cooperative commitments represent another aspect of the &ldquo;all hands on deck&rdquo; approach that the federal government and states take to disaster preparation and response.