Medication-Assisted Treatment Improves Outcomes for Patients With Opioid Use Disorder

This fact sheet has been updated. The latest information is available here.

Opioid overdoses cause one death every 20 minutes.1 Medication-assisted treatment (MAT)—a combination of psychosocial therapy and U.S. Food and Drug Administration-approved medication—is the most effective intervention to treat opioid use disorder (OUD) and is more effective than either behavioral interventions or medication alone.2 MAT significantly reduces illicit opioid use compared with nondrug approaches,3 and increased access to these therapies can reduce overdose fatalities.4 However, MAT is often unavailable to those in need of it because of inadequate funding for treatment programs and a lack of qualified providers who can deliver these therapies.5

OUD is a chronic brain disease caused by the recurrent use of opioids, including prescription drugs, such as oxycodone and hydrocodone, and illicit substances such as heroin. OUD includes dysfunction of the brain reward system, motivation, memory, and related circuitry and is reflected in individuals “pathologically pursuing reward and/or relief by substance use and other behaviors.”6 As with other chronic relapsing conditions, the clinical course of OUD includes periods of exacerbation and remission, but the patient is never disease-free.7

MAT pairs nondrug therapies, such as counseling or cognitive behavioral therapy, with an FDA-approved medication to treat OUD. These drugs—methadone, buprenorphine, and naltrexone—are available in various product formulations and doses. Each medication differs in the way it works to relieve symptoms of opioid withdrawal and/or block the euphoric effects of the drugs. Consistent with the approach used for other chronic diseases such as diabetes, treatment plans for OUD are patient specific and created with input from the patient, the prescriber, and other members of the health care team. This dual approach to OUD treatment is supported by medical and behavioral health groups, including the American Society of Addiction Medicine and the National Council for Behavioral Health, patient advocate groups, and federal entities including the White House Office of National Drug Control Policy and the U.S. surgeon general.8

Medication-assisted treatment saves lives while increasing the chances a person will remain in treatment and learn the skills and build the networks necessary for long-term recovery.Michael Botticelli, director, national drug control policy

Methadone, buprenorphine, and naltrexone are the only FDA-approved medications to treat OUD. Under federal regulations for methadone treatment, the drug must be administered daily in a certified opioid treatment program (OTP).12 In accordance with federal law, buprenorphine may be prescribed on a weekly or monthly basis for at-home use, but clinicians must apply for waivers to be able to prescribe these drugs.13 In contrast, naltrexone can be prescribed by any clinician authorized to dispense medications. These three treatment options have different mechanisms of action. The drug effects—in addition to patient-specific factors, such as response to past treatment—guide therapy selection. These factors are highlighted in Table 1.

An OTP is a facility where patients can take medications under the supervision of staff and receive other care services. These programs are regulated and certified by the federal Substance Abuse and Mental Health Services Administration (SAMHSA) and can exist in a number of care settings, including intensive outpatient, residential, and hospital settings. An OTP is the only venue where patients can receive methadone for the treatment of OUD.14

Clinicians who wish to prescribe buprenorphine for the treatment of OUD must qualify for a waiver under the Drug Addiction Treatment Act of 2000. Prescribers who do not have advanced credentials in addiction psychiatry or addiction medicine must complete eight hours of training, available online or in person. Once approved by SAMHSA, prescribers may treat a designated number of patients with approved buprenorphine products in any outpatient practice setting.15

Receptors, which are found on human cells, are places where a drug or substance made by the body binds to either cause or block an effect. Methadone and buprenorphine are opioid agonists, meaning they activate or occupy the mu-opioid receptor, the same one activated by heroin.

Methadone is a full agonist. By fully occupying the mu-opioid receptor, methadone lessens the painful symptoms of opiate withdrawal and blocks the euphoric effects of other opioid drugs. Unlike heroin and other misused opioid agonists, methadone is longer lasting, usually 24 to 36 hours, preventing the frequent peaks and valleys associated with drug-seeking behavior.16 No optimal length of treatment with methadone has been established; however, 12 months is considered a minimum for methadone maintenance.17

Buprenorphine is a partial agonist, meaning it does not completely bind to the mu-opioid receptor. As a result, buprenorphine has a ceiling effect, meaning that its effects will plateau and will not increase even with repeated dosing. Buprenorphine does not produce euphoria and does not have some of the dangerous side effects associated with other opioids.18 The optimal duration of treatment is unknown, and decisions to discontinue treatment with buprenorphine are patient-specific. Once this decision is made, the process of safely tapering the buprenorphine dose often spans many months.19

Naltrexone is an opioid antagonist, meaning that it covers, rather than activates, the mu-opioid receptor, effectively blocking the effects of opioids if they are used. Opioid antagonists do not produce any euphoric effects, so no physical dependence is associated with their use.20 Opioid antagonists are recommended for relapse prevention and for abstinence-based treatment, not for withdrawal management. 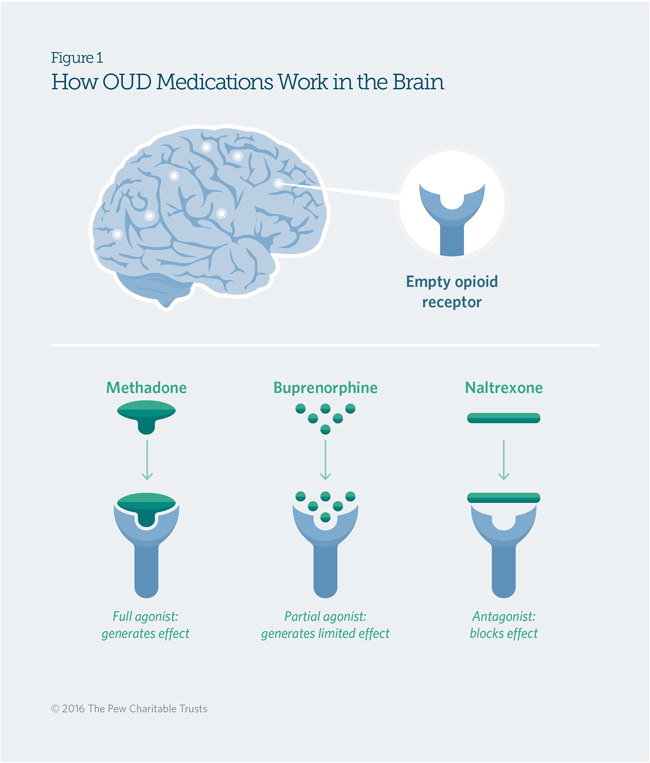 For most people, the use of medications combined with psychosocial treatment is superior to drug or psychosocial treatment on its own.22 For example, research shows that MAT significantly increases a patient’s adherence to treatment and reduces illicit opioid use compared with nondrug approaches.23 By reducing risk behaviors such as injection of illicit drugs, it also decreases transmission of infectious diseases such as HIV and hepatitis C.24

Despite MAT’s demonstrated effectiveness, many people are unable to access its benefits. One reason is that treatment programs have been slow to offer MAT drugs. Only 23 percent of publicly funded treatment programs reported offering any FDA-approved medications to treat substance use disorders, and less than half of private-sector treatment programs reported that their physicians prescribed FDA-approved medications.25 Two key barriers to the use of MAT are limited insurance coverage and a lack of qualified medical personnel. Although the Affordable Care Act mandates that insurance companies pay for OUD treatment, it does not specify which benefits must be covered. As a result, drug and behavioral therapies that may be optimal for a specific patient are not always covered. In addition, treatment services may be covered only for a specific period of time, creating harmful limitations.26 It is particularly important that Medicaid cover a broad range of treatment options because of its influence on available program services; for example, Medicaid coverage for buprenorphine is a significant predictor of its adoption by community-based treatment programs.27 The lack of authorized buprenorphine prescribers for treatment of OUD is also a critical factor in the treatment gap. Across the country, the number of people with opioid dependence far exceeds the number of eligible providers able to prescribe buprenorphine for OUD.28 In some areas, this gap is exacerbated by geography: 30 million Americans live in counties that do not have any physicians with waivers allowing them to prescribe buprenorphine for MAT.29

Curbing opioid use disorders with MAT

MAT is the most effective treatment for OUD. The individual treatment plan may include multiple types of cognitive therapies, and patients may need to try more than one drug to achieve goals. Improving awareness of how MAT works, ensuring comprehensive coverage of all services, and expanding access to eligible providers will be integral factors in curbing the opioid epidemic.

In 2018, opioid overdoses in the United States caused one death every 11 minutes, resulting in nearly 47,000 fatalities. The most effective treatments for opioid use disorder (OUD) are three medications approved by the Food and Drug Administration (FDA): methadone, buprenorphine, and naltrexone.