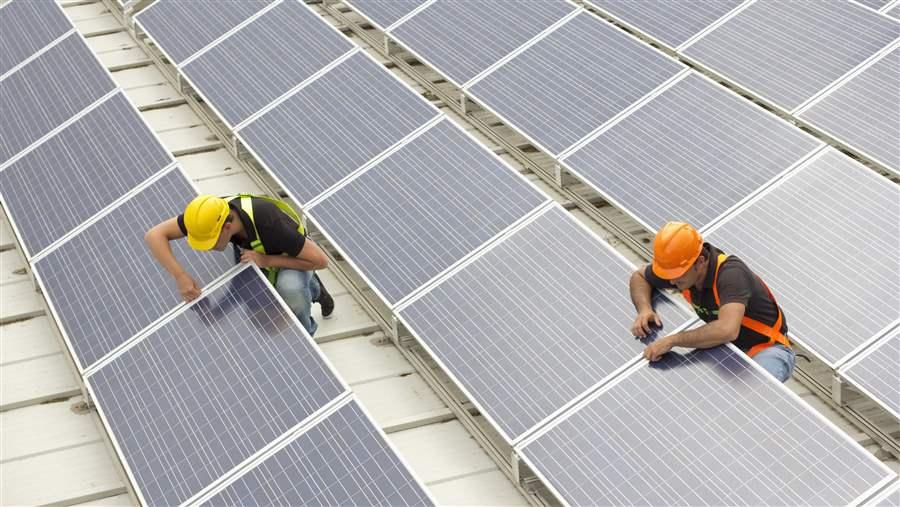 Economists attribute up to 80 percent of modern fiscal growth to technological innovation—the process of developing new knowledge and discoveries to create better commercial products, more competitive industries, and well-paying jobs.1 A new analysis by The Pew Charitable Trusts and its research partner, ICF International Inc., shows that the expected $5.8 billion investment by the U.S. Department of Energy (DOE) in Mission Innovation research and development (R&D) activities for fiscal year 2017 could add $8.6 billion to the nation’s gross domestic product (GDP); $5.6 billion in wages and benefits across the economy; and $1.3 billion and $540 million, respectively, to federal and state and local tax revenue in the first year. 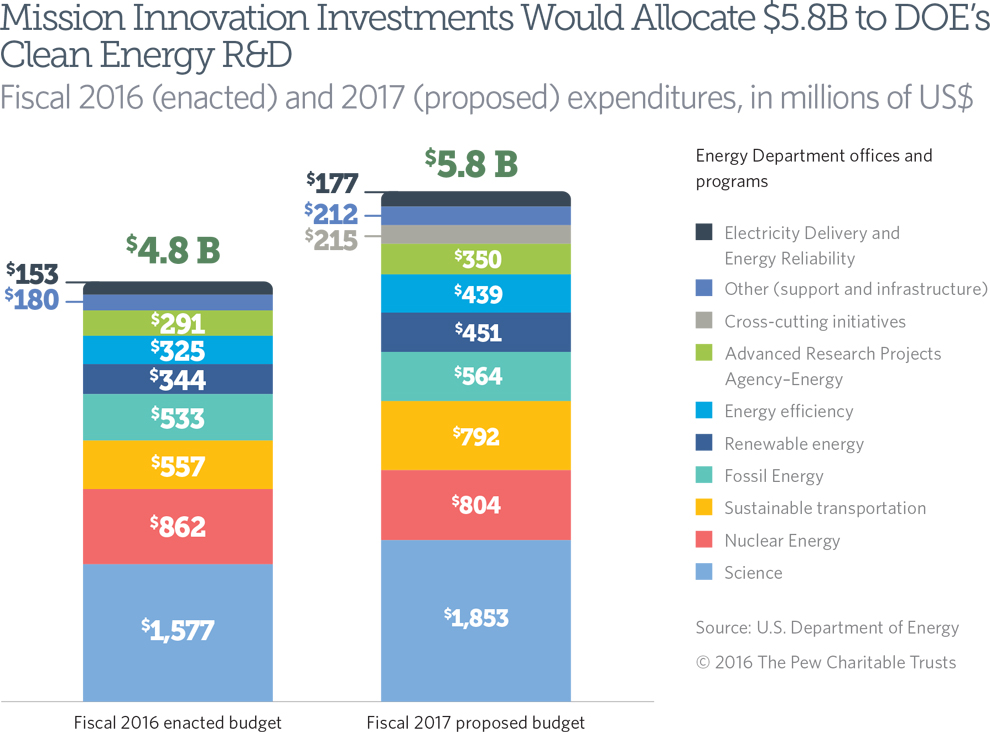 Mission Innovation is a global partnership of the European Union and 20 countries, including the United States, launched in 2015 to reinvigorate and expedite the development of clean energy technologies, reduce costs, and create commercial opportunities. These advancements are intended to promote economic growth and increase the reliability and security of power supplies worldwide.2

As part of the initiative, the United States has committed to doubling its federal energy R&D investment by the end of 2020—funding designed to strengthen ties between U.S. national laboratories, businesses, industry, the financial sector, and nonprofit investors pursuing continued technological discovery and in support of an advanced clean energy economy. Previous DOE energy R&D investment propelled major breakthroughs in advanced energy technologies, such as electric car batteries and LED lighting. That’s why continued federal investment in early-stage technology development is critical to ensure that the U.S. can seize a growing share of the benefits of clean energy and maintain a global advantage in this expanding and fiercely competitive sector.

The participants in Mission Innovation have pledged to double their governmental clean energy R&D investment over five years, with a focus on next-generation technologies that re-examine how power resources are produced and consumed. The initiative’s members account for more than 80 percent of the world’s clean energy R&D investment and include the world’s five most populous nations—China, India, the United States, Indonesia, and Brazil—as well as Australia, Canada, Chile, Denmark, France, Germany, Italy, Japan, Mexico, Norway, Saudi Arabia, South Korea, Sweden, the United Arab Emirates, and the United Kingdom.

The DOE finances clean energy research in a number of ways: through projects conducted in partnership with the private sector, exploration and development activities at the national laboratories, grants to universities, and support for collaborations at research centers and innovation hubs.

More than three-quarters of the country’s Mission Innovation activities will be directed through DOE programs, including those within the Advanced Research Projects Agency-Energy, the Office of Science, and the Energy Efficiency and Renewable Energy Office. In total, the department would spend more than $5.8 billion on Mission Innovation-related projects, contingent on congressional appropriations in fiscal 2017.3

The analysis by Pew and ICF used DOE’s fiscal 2017 budget request to model the potential short-term economic impact of the department’s Mission Innovation activities and investments4 and found that $5.8 billion in funding in the first year would: 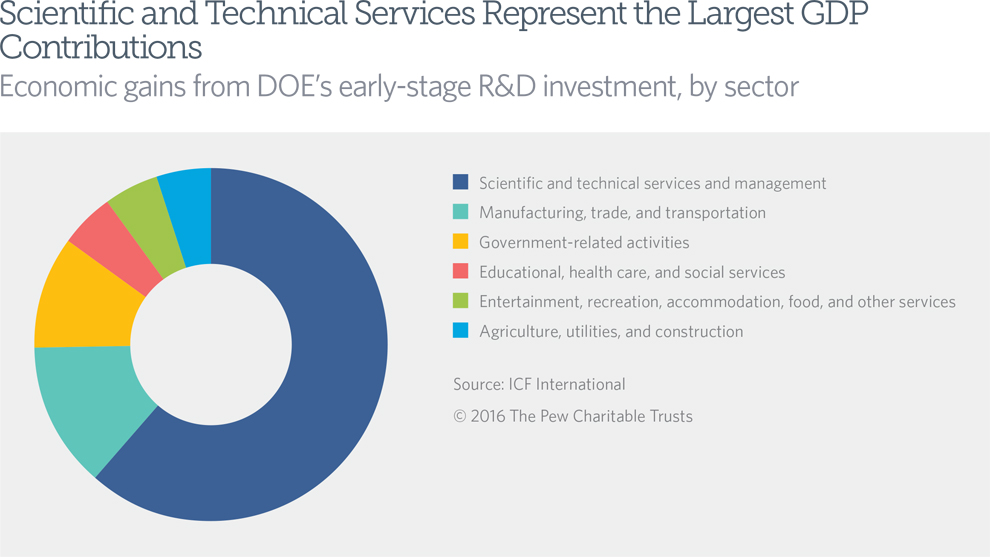 Congress must act to secure funding for Mission Innovation

Federal investment is vital to the acceleration of technological innovation. Previous U.S. government support for innovation propelled advancements in nuclear power, solar photovoltaics, smart grids, and other energy technologies by reducing costs and cultivating domestic markets. These developments, in turn, created jobs and helped expand GDP. Yet despite being the third-largest industrial sector in the country, energy has accounted for only 1 percent of the U.S. government’s R&D budget since the mid-1990s.5 By comparison, the defense sector receives almost half of federal research money annually, and the health sector gets 20 to 25 percent.

The findings presented here demonstrate that Mission Innovation activities would produce significant economic benefits in the short term, setting a precedent for even larger future gains as the early-stage R&D investment leads to commercialization and deployment. They also suggest that as the U.S. increases investment to meet the initiative’s five-year goal, the economic impacts should continue to be strongly positive.

Clean energy technologies are expected to account for 50 percent of new installed electric generating capacity worldwide by 2030, presenting an opportunity that U.S. innovators, entrepreneurs, manufacturers, and exporters cannot afford to miss. Investment in scientific investigation leads to lower-cost technology and increased adoption, and yields new products and services that create jobs and a higher quality of life for Americans. As the global marketplace for clean energy expands, funding for early exploration is essential to capture these benefits, and to improve efficiency and reduce emissions. The United States needs to prioritize investment in energy R&D, as it has done for the health and defense industries, to ensure sustained market competitiveness for the country’s scientists, developers, and manufacturers.

Congressional support is critical to advancing the clean energy industry

For every dollar spent on clean energy research and development (R&amp;D), $1.60 is created in other parts of the economy, contributing a projected $8.6 billion to the nation&rsquo;s gross domestic product (GDP) this fiscal year. That&rsquo;s according to an analysis by Pew and research partner ICF International Inc. that measures the economic impact of the Energy Department&rsquo;s fiscal year 2017 budget proposal for Mission Innovation. 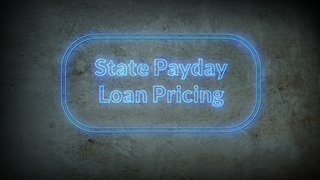