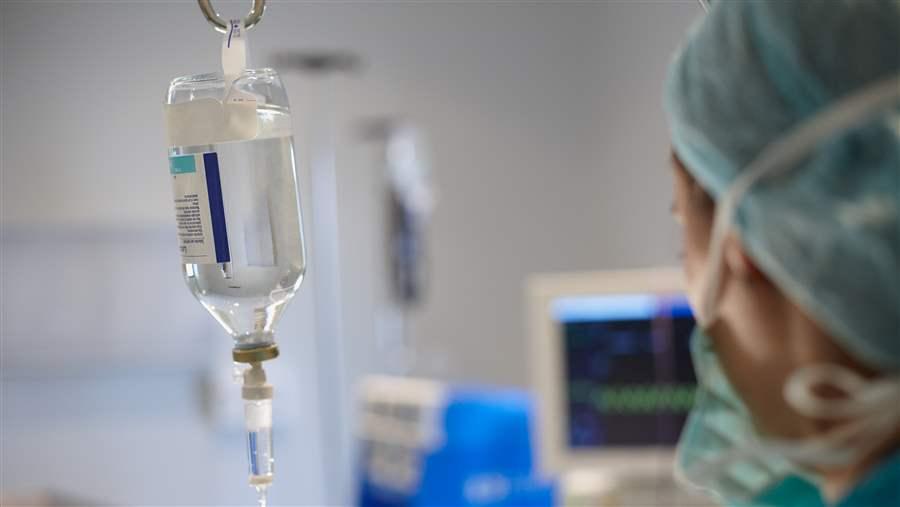 This fact sheet was updated in September 2017 with 2015 antibiotic stewardship program survey data from CDC.

Up to 50 percent of antibiotic use in hospitals is considered inappropriate,1 which contributes to antibiotic resistance as well as other adverse events for patients. Hospitals have begun to address this misuse by implementing antibiotic stewardship programs (ASPs), which aim to ensure that these drugs are prescribed only when necessary, to improve antibiotic prescribing and patient safety. Implementing these programs in all inpatient facilities is a goal outlined in the National Action Plan for Combating Antibiotic-Resistant Bacteria.

In 2015, the Centers for Disease Control and Prevention (CDC) conducted a comprehensive evaluation of ASPs in 4,569 U.S. hospitals to determine how many included all seven of CDC’s core elements recommended for hospital antibiotic stewardship programs.2 These core elements are:

The CDC found that just over 48 percent of the facilities had ASPs that included all seven core elements. Presented below are selected outcomes from this study that explore the association between hospital size, location, and the presence of specific core elements on stewardship programs.

ASPs by facility characteristics and region 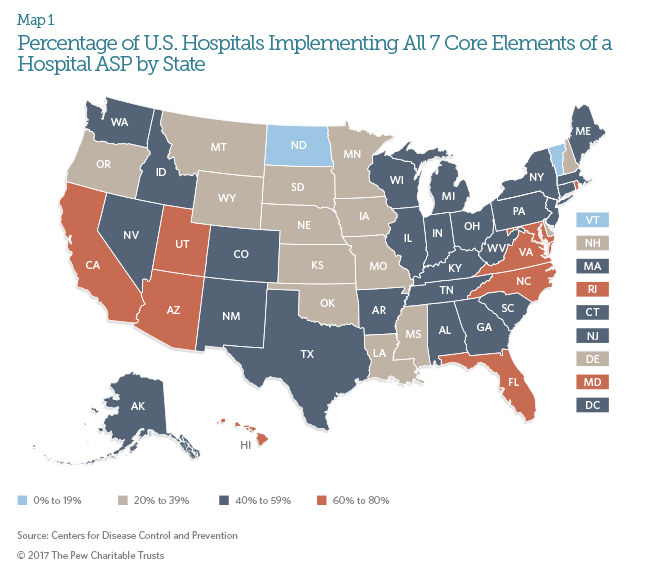 There was considerable variability in how frequently each core element was implemented by hospitals. (See Figure 1.) 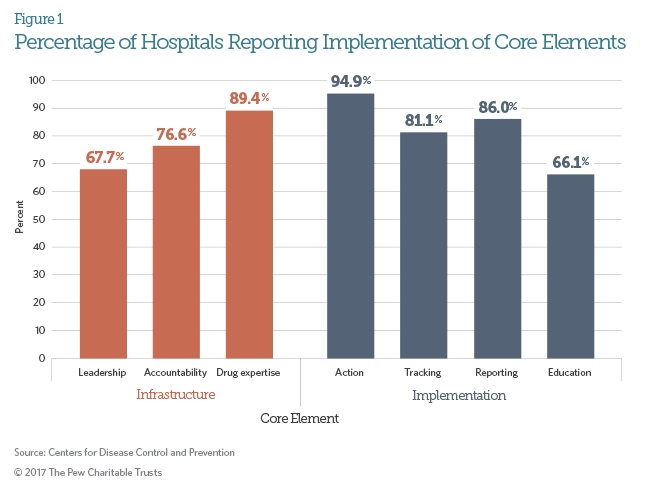 Among all facility characteristics and core elements, leadership commitment was the strongest predictor for a hospital having a comprehensive ASP. Facilities that had written support from hospital administrators were six times more likely to have a stewardship program that included all seven core elements. Salary for staff to engage in stewardship was also significantly predictive of a comprehensive program. These results highlight the considerable impact that support from hospital leadership has on successful ASPs. Facilities with limited resources can consider establishing this core element first, before gradually adding components of an ASP.

In contrast, action was the most commonly implemented core element. Examples of action varied and included facility-specific treatment recommendations, which offer guidance for providers on appropriate antibiotic management for specific conditions, and antibiotic “timeouts,” during which clinicians reassess whether a patient’s antibiotic therapy should be continued or modified, generally 48 hours after beginning the therapy.3

Many hospitals have already begun implementing ASPs, driven in part by recent national policies that encourage stewardship programs for all inpatient facilities. Understanding the national variation in ASPs, whether by facility size, location, or program content, will provide key lessons for other facilities on how to successfully implement stewardship programs and reduce inappropriate antibiotic use.

A Path to Better Antibiotic Stewardship in Inpatient Settings

Antibiotics should be used only to treat bacterial infections, and should be prescribed only in doses and for durations appropriate for the patient and infection being treated. Yet the Centers for Disease Control and Prevention (CDC) estimates that up to 50 percent of all antibiotics prescribed in the U.S. are unnecessary or inappropriate, with many of them prescribed in inpatient settings.