Regulatory requirements to protect the environment, workers, and consumers often lead to innovation, increased productivity, and new businesses and jobs. Although an argument is sometimes made that the cost of complying with regulations is too high, that the societal benefits do not justify the investment, or that job losses will result, a review of past regulations reveals just the opposite. Historically, compliance costs have been less and benefits greater than industry predictions, and regulation typically poses little challenge to economic competitiveness.

Recent rule-making, including regulations that curb carbon emissions and foster clean energy investments, are facing opposition from utilities. As public comments on these proposed rules are reviewed, it is instructive to look back at industry projections and compare them to the documented impacts and benefits of previous regulatory measures. The following table and case studies demonstrate a clear pattern among corporate and trade association opponents of overestimating the costs of regulation in their economic data.1 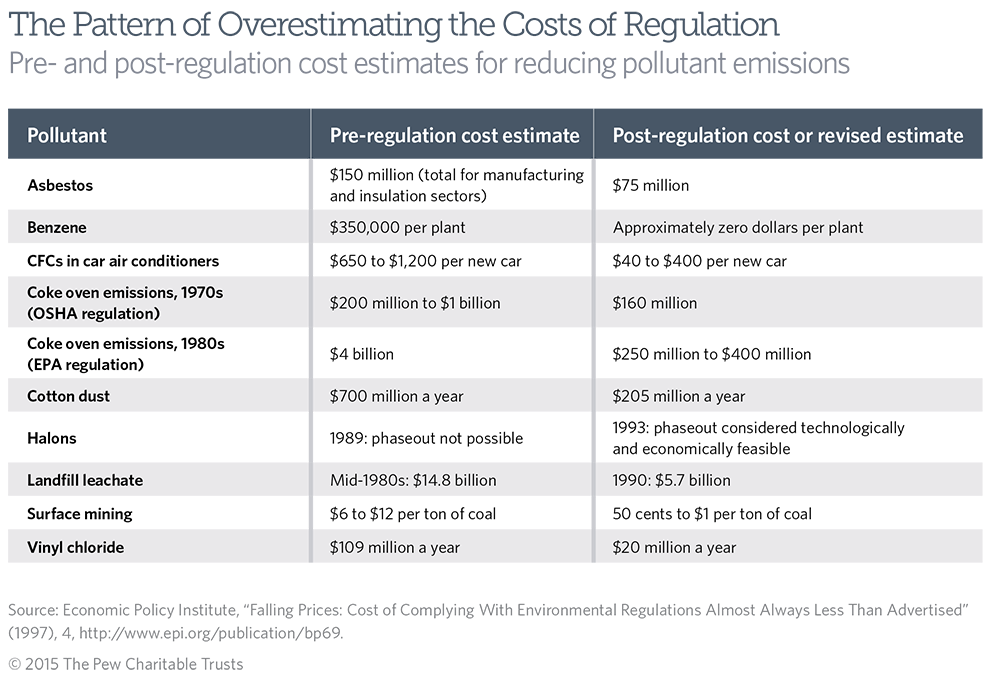 When the 1990 amendments to the Clean Air Act gave the U.S. Environmental Protection Agency responsibility for regulating sulfur dioxide under the Acid Rain Program, the utility industry said the program would increase costs for ratepayers, jeopardize reliability, and thwart development of clean coal technologies. In testimony before the U.S. House Subcommittee on Energy and Power, Southern Co. President Edward Addison cited a study from the Edison Electric Institute suggesting that the proposed law would initially cost ratepayers $5.5 billion annually, increasing to $7.1 billion a year in 2000.2

In 2003, the Office of Management and Budget re-evaluated the cost of the program from its inception (including the acid rain permits, administration of the allowance system, emissions monitoring, and appeals fees) and found that consumers paid $1.1 billion to $1.8 billion a year.3 The agency’s report also examined the impacts of all clean air regulations (including the Acid Rain Program) over the previous 10 years. It measured benefits by fewer hospital and emergency room visits, a lower rate of premature deaths, and a reduction in workdays lost to illness and valued these at between $118 billion and $177 billion annually, compared with costs of $18 billion to $21 billion to retrofit power plants to comply with the new clean air regulations.4

Some automakers began installing seat belts in their vehicles as early as the 1930s, but two laws passed in 1966—the Highway Safety Act and the National Traffic and Motor Vehicle Safety Act—set the stage for mandatory seat belts in all U.S. cars. Automakers objected, asserting that manufacturing costs would rise, adding seat belts would give consumers the impression that vehicles are dangerous, and safety was not a selling point with customers.5 However, the regulation led to numerous studies and public safety campaigns that touted the benefits of seat belts. According to the National Highway Traffic Safety Administration, these restraints saved more than 226,000 lives between 1975 and 2006 and usage increased from 69 percent in 1998 to 88 percent in 2009.6 Additionally, the agency estimated that if the national usage rate were to increase to 90 percent, more than 1,600 additional lives would be saved and 22,000 more injuries would be prevented annually.7

Before 1984, automakers preferred installing automatic seatbelts rather than competing products, such as air bags. That changed, however, following the 1984 congressional mandate that car companies install automatic passive restraints for drivers, and air bags became the most popular compliance tool. Carmakers initially estimated that air bags would cost approximately $800 per vehicle and questioned their effectiveness. In fact, the figure was closer to $300 per vehicle and additional savings were realized by consumers as medical costs and insurance premiums decreased for those who bought cars equipped with air bags.8 Furthermore, reports of air bags saving lives increased consumer demand for cars with the devices. According to the National Highway Traffic Safety Administration, air bags saved 25,782 lives from 1987 to 2008.9

The automotive emissions reductions mandated by the 1970 Clean Air Act caused an outcry from carmakers, particularly General Motors Corp. and Ford Motor Co., who contended that the requirements were excessive and the time they had to comply was too short. Initial industry estimates for the costs of adding catalytic converters were $860 per vehicle. But a 1972 report by the National Academy of Sciences priced them at $288 per vehicle.10

GM and Ford filed lawsuits against the EPA to delay the 1975 implementation deadline and used the extra time to boost research-and-development funding to study how to make catalytic converters more efficient.11 Automakers never doubted the converter’s ability to reduce emissions, but the mandate from Congress pushed them to take action, which resulted in improved fuel efficiency for consumers. The implementation of catalytic converters was so successful that the EPA revised its initial requirement of a 90 percent reduction in emissions and set new standards that compelled manufacturers to install catalytic converters in even more new cars by 1975. Owing to the widespread use of more efficient converters, hydrocarbon emissions fell from 3.08 grams per mile in 1974 to 1.32 in 1975, and carbon emissions dropped from 35.9 grams per mile to 22.9 over the same period.12 The reductions more than offset the 21 percent increase in vehicle miles traveled between 1970 and 1980.13

The United States began phasing out chlorofluorocarbons (CFCs) in 1978 because of their destructive effects on the ozone layer. Industries that used CFCs said that it would take eight or nine years and be too costly to identify and deploy substitutes. However, cheaper and more environmentally acceptable alternatives emerged in less than two years.14 Northern Telecom (now Nortel) phased out CFCs in just three years by investing $1 million in new hardware. In return, it saved $4 million in chemical waste-disposal costs and CFC purchases.15 The World Resources Institute estimated that switching to CFC substitutes saved U.S. businesses and consumers more than $1.25 billion from 1974 to 1983.16

Recycling the CFCs used in automobile air conditioners also proved beneficial. One study called it a “win-win-win situation for industry, consumers, and the environment” that yielded increased equipment sales, a procedure that eliminated the need for consumers to refresh the CFCs in their cars, and protection for the ozone layer from further depletion.17

Opposition persists, based on anticipated costs, to new regulations intended to reduce pollution emissions, save money, and increase the country’s energy security. History shows, however, that these cost-based assumptions focus on and overstate adverse economic impacts while devaluing societal benefits. Policymakers should account for any environmental and human health benefits as well as opportunities for economic growth presented by new or proposed regulations. Research shows that regulation routinely fosters innovation and promotes economic competitiveness.

1. Ruth Ruttenberg and Associates Inc., “Not Too Costly, After All: An Examination of the Inflated Cost-Estimates of Health, Safety and Environmental Protections,” Public Citizen Foundation (February 2004), http://www.citizen.org/documents/ACF187.pdf.

3. Office of Management and Budget, “Informing Regulatory Decisions: 2003 Report to Congress on the Costs and Benefits of Federal Regulations and Unfunded Mandates on State, Local, and Tribal Entities” (2003), http://www.whitehouse.gov/sites/default/files/omb/assets/omb/inforeg/2003_cost-ben_final_rpt.pdf.