Today’s purse seine fisheries for tropical tuna rely heavily on fish aggregating devices (FADs) to support record-high catch levels. An estimated 100,000 of these drifting, floating objects are deployed annually in the oceans. Tuna and other species gather beneath the FADs, which are generally built out of rafts, synthetic ropes, and plastic webbing that descends as far as 100 meters below the water’s surface.1

Purse seine fishing vessels catch tuna by encircling them in large nets and hauling them on board. The FADs help fishermen attract and locate tuna schools, but they also ensnare other species, such as vulnerable sharks, juvenile tunas, and sea turtles, that gather around the floating devices. The high numbers of these drifting rafts in use have been shown to affect migration patterns of tuna.2 The proliferation of these artificial objects has added to the growth in marine litter in our oceans and has contributed significantly to the dramatic decline of Pacific bigeye tuna populations. Still, despite the ecological consequences of unmanaged FAD use, no management or monitoring systems effectively regulate this gear that is used to catch almost half of the world’s tuna.

There is growing consensus among scientists, fishery managers, fishermen, and conservationists that FAD fisheries must be better managed. At an international symposium in 2011, scientists and managers endorsed a number of improvements.3 They called on:

One way to accurately and efficiently collect the information needed to develop a successful management plan is to use existing satellite technology. Fishing vessels deploy FADs equipped with satellite buoys that allow captains to locate these objects at any given moment. Fishery managers can tap into that network instead of creating a costly new tracking program. 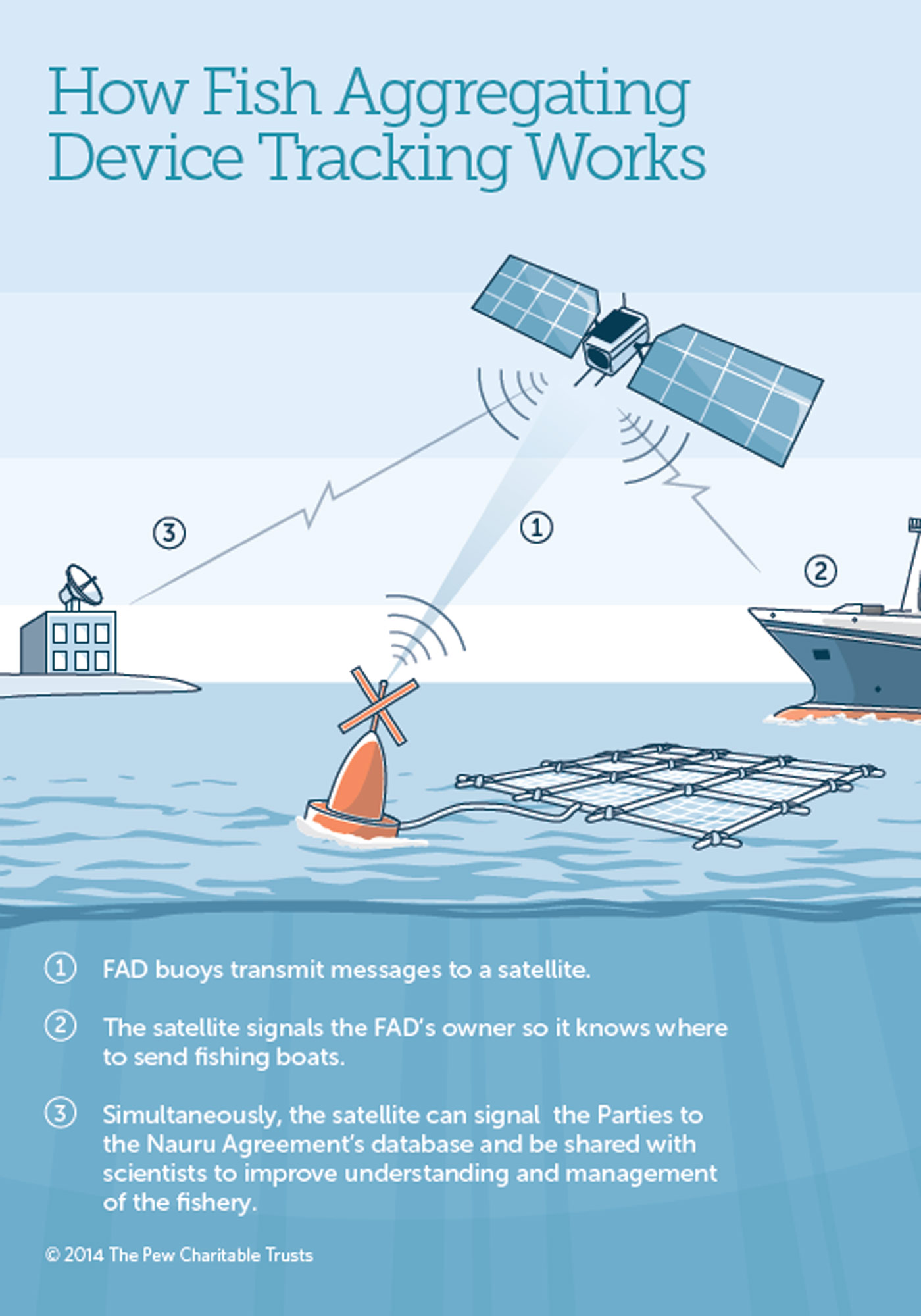 An electronic tracking system offers significant benefits to fishery managers. They include:

The Pew Charitable Trusts is working closely with eight Pacific island countries, collectively called the Parties to the Nauru Agreement (PNA), to develop a system that tracks FADs, with the goal of fostering better management throughout the region. About 50 percent of the global skipjack tuna catch comes from the waters of the PNA countries in the western central Pacific Ocean. For the PNA to effectively manage, monitor, and verify fishing activities, managers need to know how many FADs are in their waters, where they are, and who owns them.

In 2012, Pew and the PNA Office launched a trial that successfully tracked FADs in PNA waters using technology already employed by fishing vessels. All major brands of satellite buoys attached to FADs can be tracked at no additional cost to fishermen by simply requiring owners (vessels or companies) to authorize dual reporting.

The project also developed the Fisheries Management Information System adopted by the PNA so FADs could be tracked as an integrated component of the system currently used to manage the fishery.

In early 2014, Pew and the Gordon and Betty Moore Foundation funded efforts to scale up the FAD tracking system so it could track the tens of thousands of objects drifting throughout the PNA’s waters and monitor each time a fishing vessel sets its net on one. This system will allow fisheries managers and scientists to monitor FAD use in near real time. It will also expand management options and provide an incentive for fishing vessels to collect FADs in order to avoid paying clean-up costs. Once the system is fully operational, the PNA will oversee the first tuna fishery in the world to record data on all of the FADs in its waters. That undertaking will create opportunities for scientists; improve monitoring, control, and surveillance; and increase accountability.

Electronic tracking is the future of managing fish aggregating devices. Ultimately this project will improve oversight of the world’s most widely used gear for tuna fishing in regions beyond the western and central Pacific. As the market continues to demand responsible fishing practices, electronic tracking has the ability to add another level of transparency to the tuna supply chain.