More than 16,500 people in the United States die each year from opioid-related prescription drug overdoses.1

Methadone, which accounts for just 2 percent of opioid pain reliever prescriptions, is responsible for nearly one third of these deaths.2

Methadone is a synthetic opioid, or narcotic pain reliever, that has been used since the 1960s to treat heroin addiction by mitigating withdrawal symptoms. In the mid-1990s, it began to be increasingly prescribed for the treatment of noncancer pain. Methadone, which is available in a low-cost generic form, is also a preferred pain reliever for most state Medicaid programs.

In the early 2000s, as methadone prescriptions for pain control increased across the nation, so did the number of overdose deaths involving the drug. According to an analysis of data from 2009 in selected states, methadone was implicated in 40 percent of deaths that involved only one opioid—more than double the deaths attributed to other drugs in its class.3 (See Figure 1.) When taken in combination with other drugs, it was involved in 31 percent of all opioid-related deaths. In addition, emergency department visits and deaths linked to methadone have increased nationwide.

In response, the U.S. Food and Drug Administration in 2006 issued a public health advisory regarding the use of methadone for pain control and added a “black box” warning about the drug’s risks on its labeling.4 The agency also increased the recommended dosing interval from every 3-4 hours to every 8-12 hours.5 As is the case with other extended-release and long-acting opioids, the current labeling for methadone states that it should be used by patients for whom nonopioid analgesics or immediate-release opioids, such as morphine, have failed, are not tolerated, or would otherwise be inadequate.6

In 2008, the Drug Enforcement Administration asked drug manufacturers to restrict distribution of the largest formulation of methadone pills (40 mg), which is not approved for the treatment of pain, to authorized opioid addiction treatment programs and hospitals.

Data from the Centers for Disease Control and Prevention (CDC) show that methadone deaths increased nearly sixfold in 11 years, jumping from 784 deaths in 1999 to 4,577 deaths in 2010.7 These deaths coincided with growing U.S. pharmacy purchasing rates. The amount of methadone distributed to pharmacies increased more than 230 percent from 2001 to 2010.8

The problem with methadone

Methadone’s unique properties distinguish it from other opioid drugs. Pain relief from methadone lasts four to eight hours, but its effects on other organs, such as the lungs and heart, can continue for eight to 59 hours.9 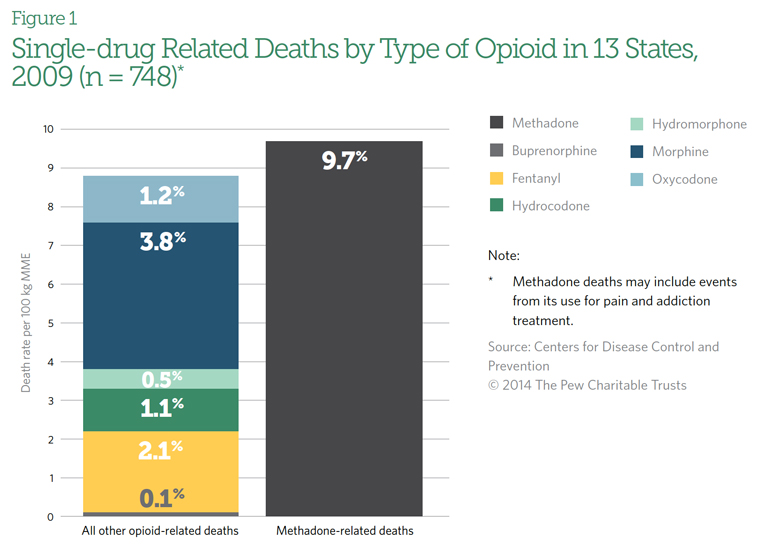 (See Figure 2.) As a result, patients may put themselves at risk by taking more of the drug before the original dose has been fully metabolized. When taken too often or at too high a dose, methadone can cause life-threatening respiratory depression and heart rhythm or heart rate abnormalities.10 Other commonly prescribed drugs, such as anxiety medications, can amplify these effects.

Why methadone is still prescribed

FDA, CDC, the American Academy of Pain Medicine,11 and the American Society of Interventional Pain Physicians12 have recommended that methadone not be used as a first-line therapy for chronic pain. However, the drug is widely prescribed because of cost considerations and its inclusion on state Medicaid preferred drug lists, which are supposed to indicate drugs that are safe and effective for a specific disease or condition. Methadone is also responsible for a disproportionate share of overdose deaths among Medicaid beneficiaries.13

Using methadone for pain is penny-wise and pound-foolish. Although it may cost a couple of dollars less per pill, the result is many more emergency room visits, and a much higher societal cost in deaths, and addiction and other problems that can be avoided. Thomas Frieden, M.D., M.P.H., July 3, 2012 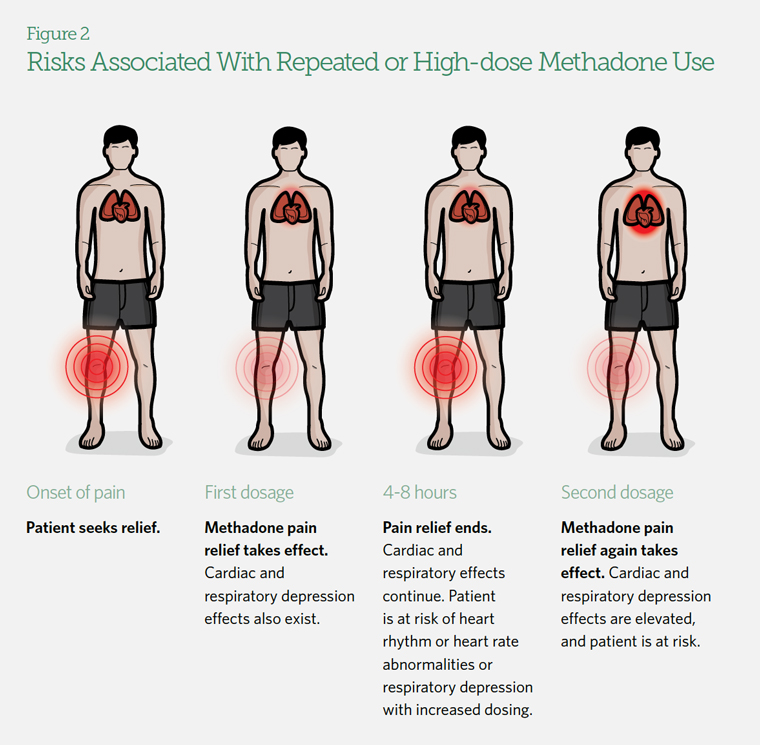 Several alternatives to methadone are available, including therapies that have been associated with less patient harm.14 These therapies include extended- or sustained-release formulations of morphine, buprenorphine, hydromorphone, and fentanyl.15 States may wish to consider removing methadone from preferred drug lists in favor of alternatives that can more safely alleviate pain for at-risk Medicaid patients.