To determine whether a tax incentive program is working, state lawmakers need to have an accurate picture of its benefits and costs. They need evaluations that analyze to what extent tax incentives influenced businesses' choices, how those decisions affected the state's economy, and what it cost to achieve those results.

Minnesota, Louisiana, and Massachusetts are among the states that have produced high-quality evaluations of tax incentive programs, answering some of the most important questions about these policies. The evaluations represent models for other states to follow when measuring the results of their own tax incentives.

How much of the economic activity was caused by the incentive, and how much of it would have happened anyway?

When the Minnesota Legislative Auditor's office undertook a 2008 evaluation of the state's Job Opportunity Building Zones incentive, the staff found they lacked the data required to precisely determine the program's results. To overcome the gap in information, they used findings from academic research on the degree to which state and local taxes affect business activity.

By applying this research to the program, the study's authors estimated that 79 percent of the jobs created at companies receiving incentives were likely to have been generated without them. The analysts estimated that each job created by the program cost the state more than $26,000, about five times higher than an earlier estimate, which had assumed all the jobs reported were created because of the incentives.1

How did the incentives affect the broader economy, not just the companies that received them?

In an evaluation of the state's Enterprise Zone program, Louisiana's economic development agency in 2010 considered both the positive and negative effects of the incentives on the state's economy. Providing incentives for some companies may help other businesses grow by giving them new customers, but it might also provide an advantage to some businesses at the expense of others.

Louisiana's evaluation found that in certain economic sectors, 90 percent of new jobs at companies participating in the Enterprise Zone program were displacing jobs with other employers. This finding was the primary reason the report concluded that the program had created around 3,000 jobs on net instead of more than 9,000 jobs that participating businesses had reported.2

What were the trade-offs associated with paying for the tax incentives?

An analysis in 2013 of Massachusetts' film industry tax credit recognized that the credit—like all budget decisions—involves a trade-off. According to the evaluation, the film incentive created more than 5,900 jobs from 2006 through 2011. But the program's $326 million price tag had to be offset by cuts elsewhere in the budget.3

The evaluation estimated that these cuts cost the state more than 3,700 jobs, leaving Massachusetts with a net gain of around 2,200 jobs for its investment. (See Figure 1.) 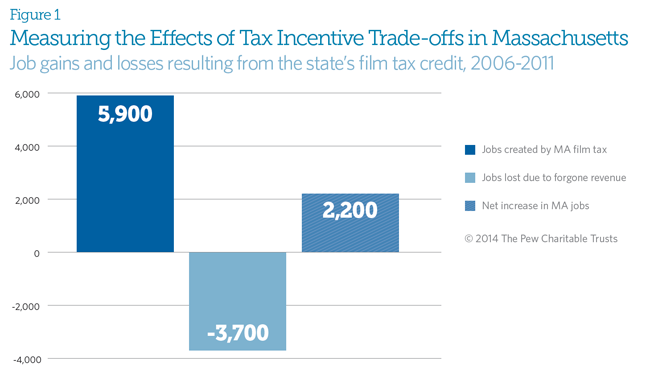