An ongoing outbreak of Salmonella Heidelberg beginning in 2013 has sickened more than 480 people who consumed contaminated chicken, according to the Centers for Disease Control and Prevention. The FDA collected Salmonella from chicken and CDC analyzed Salmonella from sick people. They found resistance to combinations of the following antibiotics: ampicillin, chloramphenicol, gentamicin, kanamycin, streptomycin, sulfisoxazole, and tetracycline.

The CDC noted, "Antimicrobial resistance may increase the risk of hospitalization or possible treatment failure in infected individuals."

There is no publicly available information indicating which, if any, antibiotics were used to produce the chicken linked to these illnesses, but the U.S. Food and Drug Administration released some data that indicates such drugs are used to produce meat and poultry. Following is a drug-by-drug analysis based on FDA reports. 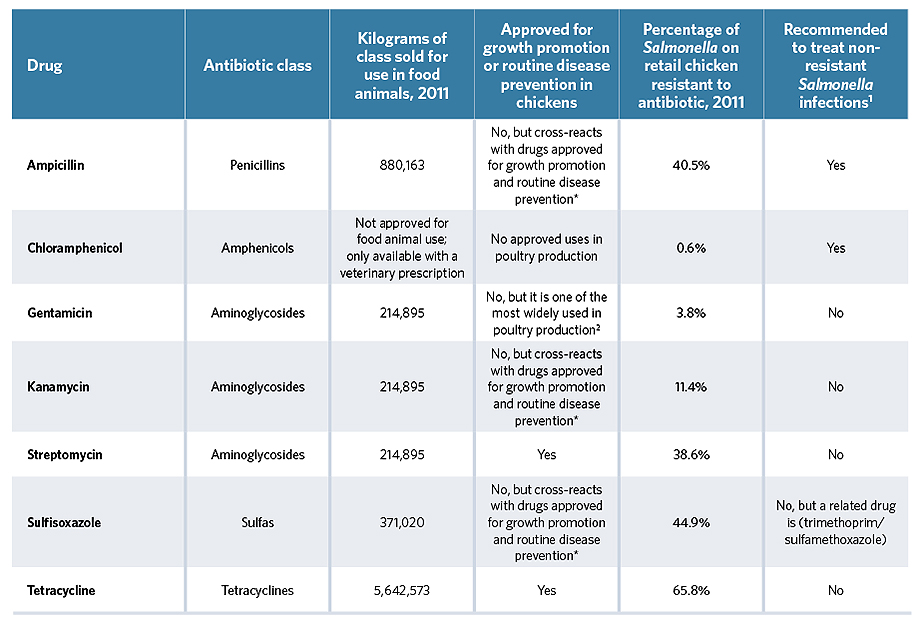 *Bacteria exposed to one antibiotic may develop resistance to other drugs. Using tetracyclines, for example, to produce chickens can contribute to the emergence of Salmonella that are resistant to ampicillin.

2 Taradon Luangtongkum et al., “Effect of Conventional and Organic Production Practices on the Prevalence and Antimicrobial Resistance of Campylobacter spp. in Poultry,” Applied and Environmental Microbiology May 2006 vol. 72 no. 5 3600-3607.