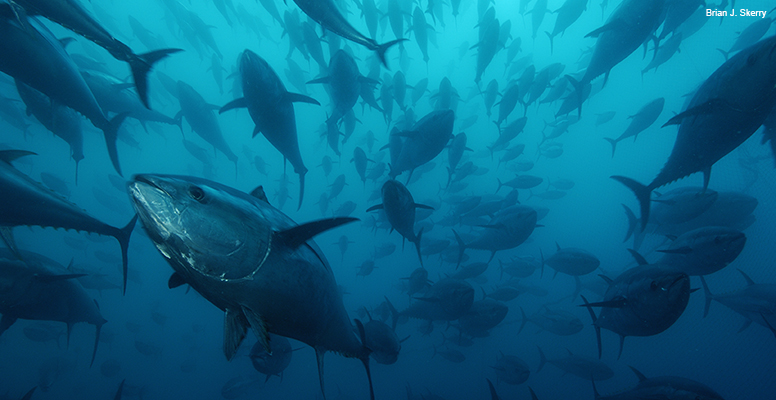 The story of Atlantic bluefin tuna is a cautionary tale of explosive growth in demand, management neglect, overlooked science, falling populations, and an uncertain but promising future. Involving an international cast of characters stretching across the Atlantic Ocean and the Mediterranean Sea—from early fishermen in ancient Greece to the scientists and advocates who are fighting today to ensure a long-term future—it is an illustration of what happens when big money and sustainability go head-to-head.

At the center of the story is an apex predator that grows to the size of a small car, outswims almost every other fish in the ocean, and brings bids of tens of thousands of dollars apiece at fish markets around the world. It is an amazing species, commanding the awe of nature lovers, the dollars of sushi connoisseurs, and the respect of fishermen. It also generates political and diplomatic controversy among some of the world's richest and most powerful countries.

While the western and eastern stocks each have a unique story and history, both have been harmed by intense fishing pressure, declining numbers, and large gaps in scientific understanding—and both will be greatly affected by upcoming management decisions.

In October 2012, the International Commission for the Conservation of Atlantic Tunas, or ICCAT, the intergovernmental organization charged with managing Atlantic bluefin tuna, finalized new stock assessments that showed an increase in both the eastern and western populations. But recognizing the high degree of uncertainty in the models, ICCAT's scientific committee recommended that quotas remain the same to allow bluefin populations to continue to grow from historically low levels. At the 2012 ICCAT annual meeting the next month, member governments maintained the quotas for both areas in line with the scientific advice. While this was good news, the story is far from over. Bluefin managers now must carefully nurture this fragile path to recovery and not let political pressure to raise quotas undermine improvements before they take hold.

In November 2013, ICCAT member governments will again negotiate a quota for Atlantic bluefin tuna in the western Atlantic— and there is pressure to increase it beyond the clear scientific recommendation. But the path forward is clear. The scientific advice must be followed if this population is to experience real recovery. And governments must look to the future before considering increasing quotas. They should ensure that the scientific models used to determine the status of the population—and for setting appropriate fishing levels—are sound and that illegal fishing is accounted for and addressed.

The western bluefin population: Will the promised recovery ever happen? 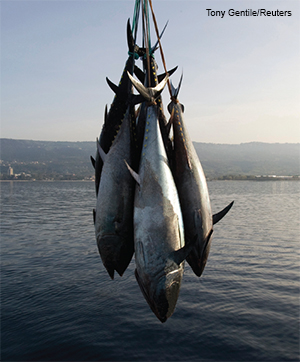 Before 1950, fishermen in the western Atlantic had little interest in bluefin tuna, and commercial catch was virtually nonexistent. But demand soon grew quickly. In 1964, for example, approximately 18,000 metric tons of bluefin tuna were caught in the western Atlantic. That was 18 times the 1960 catch level. Because the western bluefin population is much smaller than the eastern population, this intense fishing pressure soon took its toll; by the end of the decade, the catch had fallen by 80 percent. It remains low today.

In 1998, recognizing that the population was near a historic low, ICCAT implemented a recovery plan that set quotas and instituted a stricter minimum size limit. Unfortunately, the plan has not proved to be successful. The population in the western Atlantic is now at just 36 percent of its already depleted 1970 level; little has changed from where it was 15 years ago, when recovery efforts began.

There are several reasons why the recovery plan has not worked as designed. For the western Atlantic, ICCAT scientists use two contrasting scenarios when they estimate the number of young bluefin that survive each year. The “high recruitment scenario” assumes that the number of new offspring is directly related to the number of adults, while the “low recruitment scenario” assumes that the limit on the number of young born each year has been reached, even if the number of adults or spawning fish increases in the future. These scenarios provide very different outcomes and hence differing recommendations for managers, which can range from shutting down the fishery to increasing the quota. As a result, managers have been forced to make decisions using two conflicting sets of information. So far, the decisions have failed to produce a meaningful rebound in the population.

Complicating the situation further is the significant number of eastern bluefin that migrate from the Mediterranean to feed in the western Atlantic. For many years, scientists believed that these two bluefin populations were entirely separate, staying on their own sides of the ocean basin. However, recent scientific studies confirm high levels of mixing between the two, with eastern bluefin traveling to western waters in search of food, and vice versa.

It is now estimated that 54 percent of the bluefin caught off the East Coast of the United States come from Mediterranean stock. But this migration is not accounted for in ICCAT's model; a portion of the eastern fish are counted as western, potentially leading to inflated estimates of the number of western bluefin. These higher counts may cause the assessment to provide an overly optimistic picture of the health of the western population. To improve the accuracy of the scientific projections, this information must be incorporated into future stock assessments.

Although bluefin tuna have been part of Mediterranean cultures for thousands of years, the 1990s marked the explosion of the industrial-scale fishery in the eastern Atlantic. That decade brought a significant increase in the size of the purse-seine fleet—fishing boats that use large nets to surround entire schools of bluefin. Rising Japanese demand for fatty tuna to supply the increasing appetite for high-quality sushi also led to the development of tuna “ranching,” in which smaller, wildcaught fish are placed in floating pens and fattened for months or years before being sold. Although quotas were introduced in 1998, illegal fishing, the rising price of bluefin, and government subsidies led to a significant increase in the total catch. By 2007, fishing fleets were catching an estimated 60,000 metric tons of bluefin annually, more than double the quota for that year. Most of this went to Japan, which consumes close to 80 percent of the bluefin caught each year. The majority comes from the eastern Atlantic stock.

These elevated catch levels continued throughout the 2000s as government managers set quotas well above the scientifically recommended level for a sustainable fishery. In fact, an independent review commissioned by ICCAT in 2008 called ICCAT's eastern bluefin policies a “travesty of fisheries management” and “an international disgrace.” But even this did not motivate governments to act in the interest of a long-term, profitable, and sustainable fishery. In 2008, an ICCAT stock assessment showed that the eastern bluefin population had fallen to nearly 60 percent below the 1970 level. In 2009, many governments and environmental organizations called for a suspension of international trade in bluefin. ICCAT finally responded by reducing quotas to scientifically recommended levels. But the story of eastern bluefin tuna does not end there.

Although governments implemented stricter quotas in early 2010, no similar reduction in the fishing fleet has occurred. Despite an ICCAT program to reduce fishing effort, the number of remaining vessels still had the collective capacity to catch three times the allowable limit. This overcapacity, which occurs when governments increase capacity or prevent a reduction in the number of vessels, facilitates increased illegal fishing. The most recent bluefin trade studies show that illegal catch in the east continues today, even as ICCAT has instituted stricter enforcement measures. A scientific study published in 2013 estimated that between 2005 and 2011, actual catch exceeded the total allowable quota by 44 percent. The difference increased to 57 percent when measured between 2008 and 2011 (Figure 1). 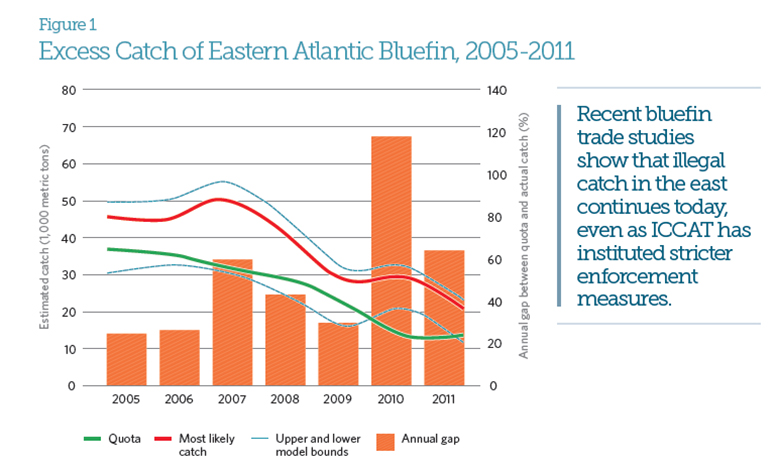 Added to the overcapacity and underreporting is the ongoing problem of the illegal use of driftnets—massive fishing nets stretching for miles suspended by floats—to catch bluefin. Although the European Union and ICCAT both banned the use of driftnets for catching large open-water species nearly a decade ago, the nets continue to be used by Italian vessels to catch Atlantic bluefin in one of the most well-known and destructive cases of illegal fishing by European vessels. Current regulations, enforcement, and sanctions have failed to stem the use of these nets to catch bluefin, one of the most sought-after fish in
the sea.

Despite strong evidence of continued illegal activity, the eastern bluefin stock assessment uses reported catch instead of the total number of fish removed from the sea, ignoring any recent illegal catch.

The future of bluefin

According to the 2012 stock assessment, the eastern Atlantic bluefin population has increased in recent years, but ICCAT scientists acknowledge the large amount of uncertainty surrounding the magnitude of the growth. The western Atlantic bluefin stock assessment suggested a slight increase, but, again, ICCAT scientists recognized the uncertainty of the results. Since the stock assessment models currently fail to take into account all the best available information and science, the results must be treated with caution and must not be used as a rationale for increasing quotas. Any possibility of an increase in quotas can be considered only on the basis of clear scientific advice resulting from an overhauled and improved stock assessment. That is now scheduled for 2015.

Instead, governments should again heed the scientific advice to not increase the current quotas. ICCAT should allow both populations to grow while working to update its stock assessment models. If anything, the 2012 results are a positive sign that the stronger management measures taken since 2009 are beginning to yield results and should be reinforced. There is no new assessment for either population, so any move to increase quotas at this time would be counter to scientific advice, and a signal that governments are not committed to sustainable management of Atlantic bluefin tuna.

At the 2013 annual meeting in Cape Town, South Africa, ICCAT governments must heed scientific advice, exercise caution, and ensure a future for Atlantic bluefin tuna by:

ICCAT took important steps in 2009 when, for the first time, it set quotas for both eastern and western bluefin tuna in accordance with scientific advice, and again in 2011 when it launched a pilot program to help combat illegal fishing by electronically tracking bluefin from sea to sale. Now, when there are signs that the bluefin populations may be increasing slowly, sticking to the science and taking the actions detailed above are critical to drive a real recovery for this important species.