Albacore tuna travel up to 5,000 miles across the Pacific Ocean each spring. So their arrival on the West Coast is eagerly awaited by anyone who catches, sells, or eats them.

For commercial fishermen, it's a chance to sell a premium product, often fresh off the dock. For sportsmen, nothing is quite so thrilling as hooking an albacore and bringing it into the boat.

Albacore depend on abundant forage fish—small schooling fish such as herring and anchovies—to fuel their oceanic migration and sustain their intense metabolism. A single albacore consumes as much as 25 percent of its weight each day.

Forage fish support robust and healthy stocks of albacore. The Pacific Ocean's California Current, which flows south along the West Coast, is one of just a handful of large marine ecosystems that are dominated by periodic upwelling of cold water, where nutrients pulled from the deep ocean spur the growth of microscopic plants called phytoplankton at the surface. Forage fish eat the phytoplankton and then are themselves eaten by seabirds, marine mammals, and bigger fish.

A recent decade-long study revealed that tuna, sharks, seabirds, seals, and whales cross the ocean every year to feed on the rich marine ecosystem off the West Coast. Tuna, in particular, rely on small schooling species such as sardines, anchovies, and squid.

Some of the same forage species that tuna rely upon are also caught commercially. Yet conventional fisheries management plans overlook the importance of forage fish as food for ocean wildlife. As a result, catching forage species, even at a rate that is technically not considered overfishing (catching fish faster than they can reproduce) may leave insufficient food in the ocean for other animals.

Fish farmers depend heavily on wild-caught forage species. Pacific sardines, for example, have been fed to pen-raised bluefin tuna in Mexico and Australia. At least 7 pounds of sardines are needed to add a pound to a bluefin tuna. Although this process may benefit lucrative sushi markets around the world, explosive growth in the aquaculture industry threatens to drain marine ecosystems of the forage fish that sustain albacore and other species in the wild. The Pacific Fishery Management Council's own ecosystem plan-development team notes that the “spectacular growth” of global aquaculture raises the likelihood for fishing of West Coast forage fish that aren't yet being targeted.

The Pacific marine ecosystem can be protected. The Pacific Fishery Management Council can promote a healthy marine food web by taking into account the role of forage fish in sustaining albacore and other wildlife. But the council needs to hear from people like you.

Diet composition by weight for albacore 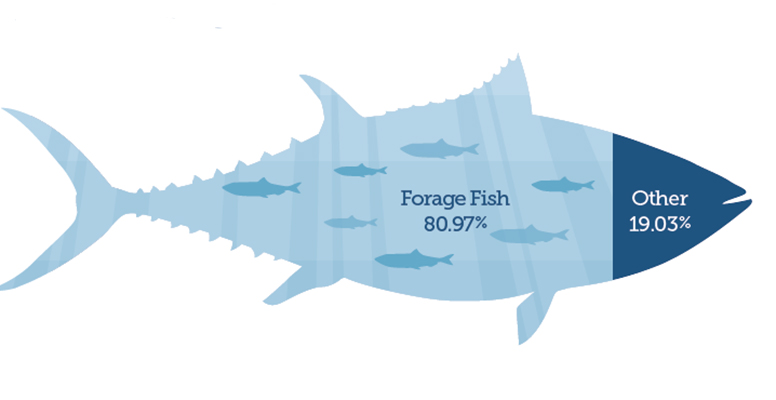 To view citations and additional images, download the PDF below.