From whales to striped bass, important marine animals eat smaller fish and organisms to survive. These prey, or “forage fish,” in the food web are critical to a healthy ocean ecosystem. But people are not doing enough to ensure the abundance of prey species to feed valuable fish populations and marine life.

The need to protect this basic prey, which ranges from mackerel and menhaden to herring and anchovies, is growing more urgent. Populations of some of these small fish have plummeted. Millions are scooped up by industrial fishing gear and ground into fertilizer and pet food. Millions more are caught by accident in trawler nets.

Without this important food staple, diets are compromised, and it's a scramble to find suitable substitutes. That disruption can send an unhealthy ripple effect stretching across the ocean ecosystem. Protecting the prey is fundamental to rebuilding depleted fish populations, conserving marine animals, and maintaining a balanced food web. 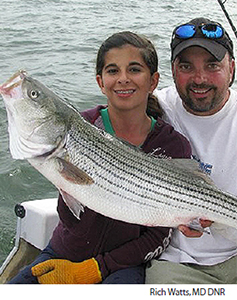 Shad's cultural and economic importance stretches back to the American Revolution, earning it the nickname “Founding Fish.” Shad helped feed the Continental Army, and George Washington caught shad on their spawning runs up the Potomac River. But a deadly mix of overfishing and habitat loss has pushed shad populations to historic lows. In rivers, shad are threatened by dredging, dams, and pollution. At sea, they're taken accidentally as what's called “bycatch.” In 2013 East Coast states faced tight restrictions on recreational shad fishing. But industrial trawlers targeting herring, mackerel, and squid still catch shad incidentally in giant nets. Recovery for shad must include increased monitoring of this fleet and federally-managed limits to reduce the amount caught at sea. Restoring American shad will strengthen our coastal ecosystem and revive a historic fishing tradition.

Menhaden are often called the most important fish in the sea. These creatures, which barely reach a foot long, are a critical food source for wildlife and other fish, including tuna, bluefish, striped bass and tarpon. Yet their populations along the Atlantic coast, from Maine to Florida, are at a record low—just 10 percent of historic levels. The shortage threatens the Atlantic marine food web and could cripple the commercial and sport fishing industries. Studies of osprey and striped bass show menhaden has declined as a part of their diets.

The menhaden population must grow to ensure a sufficient supply for fishermen to catch and for predators to eat. In December 2012, the Atlantic States Marine Fisheries Commission voted to reduce the allowable catch by roughly a quarter, an important step toward helping the species begin to rebuild.

Who wants the prey?

Across the United States, market pressure is increasing to expand industrial fishing for prey species which often become ingredients in many popular products, such as pet food and fertilizer. And they are ground up to become ingredients in fish meal used by the booming global fish-farming industry. Farmed fish now account for almost half of the seafood consumed by people worldwide.

Although prey species have been known for their abundance and rapid reproduction, scientists are finding evidence that their populations are just as susceptible to long-term population declines as animals higher on the food chain.

Fishery managers must consider the role that basic prey species play in the marine food web and weigh their importance when setting fishing rules. Taking scientific stock of the state of prey species is critical. Special protections for prey are needed particularly to help ensure sufficient food for overfished species that are trying to rebuild their populations. Prey protections are the best way to guarantee abundant food and a healthy ocean ecosystem for marine life that draws millions of people to the coast for diving, fishing, boating and other recreation.

To learn more about Pew's forage fish work, the Herring Alliance, and how you can help, download the complete fact sheet below.