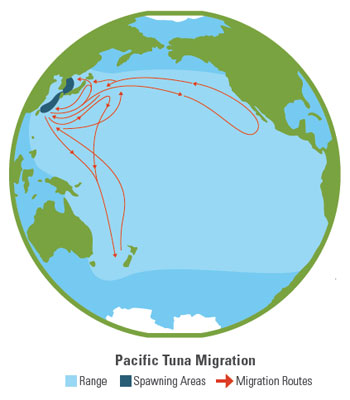 The Pacific bluefin tuna has often been called “the forgotten bluefin.” Although these sleek top predators can grow up to 550 kilograms (1,200 pounds) as they crisscross the ocean to feed and breed, they have been largely ignored as a target for management and conservation action, even as their numbers have fallen. Not only are these fish vulnerable to overfishing because of their biology, they are also highly sought after by seafood connoisseurs. Caught mainly by Japanese, Mexican and Korean vessels, Pacific bluefin are predominantly sent to Japanese markets, where a single fish may sell for hundreds of thousands of dollars, and served as high-priced sushi.

Even as the Pacific fishery continues to intensify, managers have failed to adopt science-based catch limits to end the overfishing. Experience in the Atlantic Ocean shows that adoption of science-based measures is vital to the future of bluefin fisheries, and it is critical that effective management action be taken for Pacific bluefin without delay.

Despite their vast range, Pacific bluefin adults reproduce in only two known spawning grounds, located off the coast of Japan. The majority of bluefin remain in the western Pacific throughout their lives. Others, when they reach one to two years of age, begin a 11,100-km (6,000-mile) migration across the Pacific Ocean to search for food in the fertile waters off California and Mexico's Baja Peninsula. After two to four years of feeding in the eastern Pacific, they return to spawn in the same western Pacific waters where they began life, and they never travel to the eastern Pacific again. 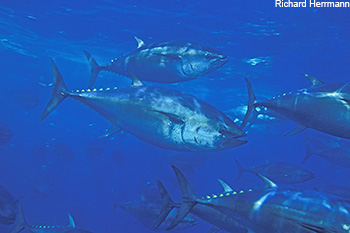 Catches of Pacific bluefin have doubled in the past 20 years, and fishermen target fish when they are closest to shore and easiest to catch—as young juveniles and as adults gathering to spawn. According to a 2010 report in the journal Nature, approximately 90 percent of the Pacific bluefin caught had not reached maturity, a practice that threatens the future of the population. A major industrial fishery also pursues large Pacific bluefin, removing vital, reproductively mature fish from the ocean. Countless artisanal vessels add to the problem by reeling in an unknown number of adults and juveniles on the fish's spawning ground. Despite solid evidence that these fisheries are depleting the species, key protections such as science-based catch quotas and minimum size limits still do not exist for Pacific bluefin tuna.