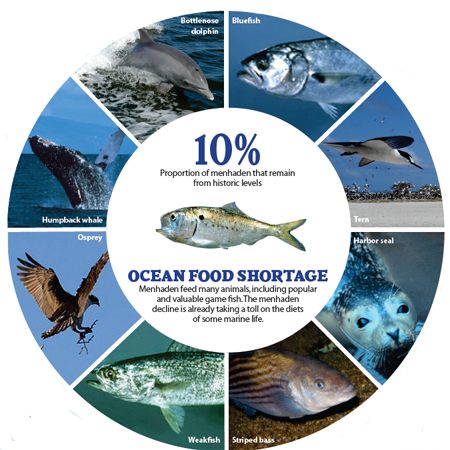 Often known as “the most important fish in the sea,” Atlantic menhaden play a vital role in the marine ecosystem from Maine to Florida. These fish, which barely reach a foot long, are a critical food source for birds, mammals, and valuable fish species. Yet their number has plummeted to a record low. Billions of Atlantic menhaden have been hauled in and ground up, removed from their ecosystem mostly to be used in fertilizer, pet food, dietary supplements, and feed for farm-raised fish, chicken, and pigs.

The shortage is taking a toll on the many wild animals and fish that eat menhaden, threatening the entire Atlantic marine food web and the commercial and sport fishing industries that depend on a healthy ocean.

Fishing too fast for too few fish

In terms of weight, more menhaden are caught than any other fish on the East Coast. One company, Omega Protein, operates a fleet that each year scoops up about three-quarters of the entire East Coast catch—more than 410 million pounds. Most of the catch comes from the Chesapeake Bay, a critical habitat for juvenile menhaden, but the fleet also catches menhaden along the Atlantic coast from New Jersey to North Carolina.

The plan to save menhaden

In November 2011, the Atlantic States Marine Fisheries Commission voted to take steps to increase the menhaden population to approximately four times its currently depleted size. More than 90,000 public stakeholders, including hundreds of fishing and other interest groups, voiced their concern about the state of menhaden and asked the commission to implement strong management measures so that the recovery could begin as soon as possible. The commission—made up of state lawmakers, environmental agency workers, federal officials, fishermen, and industry representatives—manages fishing policies in coastal waters of the 15 Atlantic states.

In the coming months, the commission will decide how to deliver on the historic commitments it made in 2011. It must establish a new way to manage the fishery with a sustainable coast-wide annual catch quota, effective monitoring, and rules that require fishing for menhaden to stop when the quota is reached.

Pew will continue to push for a science-based rebuilding plan and also for rules, such as catch limits, to help managers effectively enforce it. These efforts should have lasting positive effects on the Chesapeake Bay and Atlantic Coast ecosystem.