The eastern Atlantic and Mediterranean stock of bluefin tuna (BFTE) has long been below a healthy population level. Although the International Commission for the Conservation of Atlantic Tunas (ICCAT), which manages bluefin in the Atlantic and Mediterranean, has significantly reduced quotas in recent years, several independent studies indicate that the actual catch of bluefin greatly exceeds annual quotas due to substantial illegal fishing.

While there is debate about the extent of excess catch, ICCAT assumes no illegal fishing in recent years and hence bases its stock assessment and quotas only on reported catch. This seriously jeopardizes the chance of BFTE recovering by 2022, the official ICCAT rebuilding deadline. A healthy future for bluefin depends on quotas and management decisions based on actual catch, which incorporates all sources of catch, including the most reliable estimates of illegal fishing. 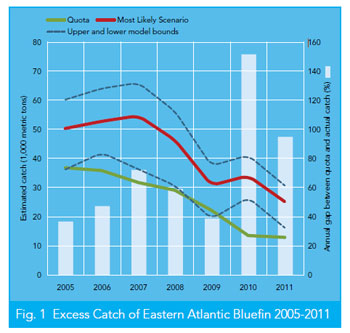 In 2012, an independently reviewed scientific analysis, 'Trade-based Estimation of Bluefin Tuna Catches in the Eastern Atlantic and Mediterranean, 2005–2011' by Antonius Gagern, Jeroen van den Bergh and Rashid Sumaila, examined official trade records to provide an estimate of the level of illegal catch. The analysis builds on previous studies such as ‘Mind the Gap' (Pew 2011), which provided evidence of pervasive illegal catch in the eastern Atlantic and Mediterranean Sea bluefin tuna fishery.

The 2012 study estimates that total allowable quotas were exceeded by 62 percent between 2005 and 2011 and by 77 percent between 2008 and 2011, confirming previous reports of persistent and widespread illegal fishing in the BFTE fishery. This means that catch exceeded the quota by approximately 112,000 metric tons (mt) during the seven-year study period. Further, the gap between actual catch and the quotas is likely to be even higher due to black -market trade and several other factors not captured in official records.

The study authors gathered monthly import and export records from several official trade sources for 38 countries, representing 97.5 percent of the total imports and exports of BFTE. They combined data on a quarterly basis and cross-checked sources and import and export records. In cases where the import and export records differed, the authors presented a number of options for selecting data and highlighted the scenario believed to best reflect reality. To enable a comparison with total allowable quotas (mt) for each year, the authors also performed a series of calculations to translate the weight of traded bluefin tuna products (filets, loins, etc.) into the weight of the whole fish at the time of catch.

Why Does This Matter Now?

In September 2012, the SCRS, ICCAT's scientific body, conducted a stock assessment to determine the health of the eastern and western Atlantic bluefin populations. In October, the SCRS reconvened to finalize its management advice based on the results of the stock assessments. In November 2012, ICCAT managers will meet in Agadir, Morocco to set both eastern and western Atlantic bluefin quotas for the next two to three years. The SCRS's ability to accurately count the number of Atlantic bluefin in the east and west is crucial to the sound management and future of bluefin. 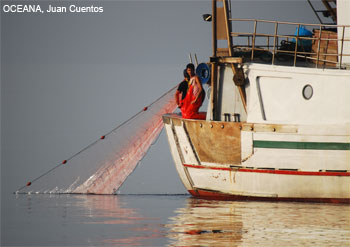 Despite the findings of this and several other studies highlighting persistent under-reporting and overcapacity in the BFTE fishery, the 2012 stock assessment was based on the inaccurate premise that no illegal fishing has occurred since 2008. The resulting stock assessment therefore showed a substantial increase in the BFTE population that may not be accurate.

While the 2012 assessment ignored recent illegal catch estimates, in its report to ICCAT the SCRS recognized the benefits of these trade studies and recommended that ICCAT set up a working group to further examine trade data relative to reported catch data so as to get a better handle on illegal catch. More importantly, given the significant uncertainty surrounding the stock assessment, the SCRS recommended that managers keep the BFTE quota at or near the current quota of 12,900 mt.

The Pew Environment Group is calling on ICCAT to heed the scientific advice and not increase quotas until illegal fishing is addressed and the best available science is incorporated into the stock assessment.

Additionally, the Pew Environment Group is asking ICCAT to: