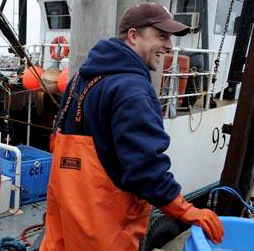 The movie "Jaws" inspired Curatolo-Wagemann to become a marine biologist. He conquered his fear of the water and became fascinated by sharks, which are often misunderstood. In 1994, Curatolo-Wagemann spent a semester at sea while earning his undergraduate degree in marine biology. Wading in three feet of water off a small island in the Bahamas, he encountered a lemon shark, which bit his leg, slicing into the muscles and tendons that control ankle movement. He lost a large amount of blood before he could reach the mainland for surgery. Although doctors predicted he would be unable to walk without a leg brace, Curatolo-Wagemann relies on it only to play sports.

For the past 13 years, Curatolo-Wagemann has been working as a marine biologist on eastern Long Island, where he is a storm-water specialist and manager of a DNA bacteria tracking lab. He recently completed his master's degree with a thesis on shark fishing regulations and the health of shark populations along the U.S. East Coast. He chose to help the Pew Environment Group's conservation efforts because he wants to teach people about threats to the world's shark populations.