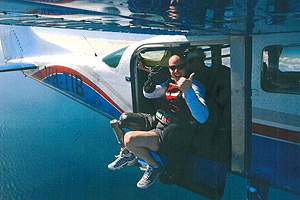 A bull shark grabbed de Gelder by his arm and leg when the navy diver was on a training exercise in Sydney Harbor in 2009. He tried to fight back but was pulled under water and violently shaken. Then suddenly the shark ripped off de Gelder's arm and leg. De Gelder nearly died, spent two months in a hospital, and faced enormously challenging rehabilitation.

But today, de Gelder is fitted with state-of-the-art prosthetics and is back on the job. He is the author of “No Time for Fear,” an inspirational book about his experiences. As a shark conservation advocate, he believes everyone has an obligation to protect sharks and the important role they play in the ecosystem. De Gelder was among a group of shark attack survivors who joined the Pew Environment Group in 2010 to press the United Nations for improved shark conservation measures.