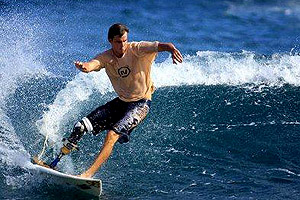 In one swift move, a tiger shark tore off Mike Coots' leg while he was surfing off the Hawaiian island of Kauai in 1997. Coots caught a wave to shore and friends rushed him to the hospital. As he labored through months of recovery, he discovered a new hobby that eventually turned into a successful career: photography. Today, Coots' clients include major hotels, surfing-related businesses and the Hawaii and Kauai visitor bureaus. And he surfs daily with a prosthetic leg.

Coots decided to become a shark advocate after he learned about the animals' plight from the Pew Environment Group. He has travelled to the United Nations and the U.S. Capitol to speak in favor of shark conservation. And he worked to help pass Hawaii's 2010 ban on possession and sale of shark fins – the first state to take such action.