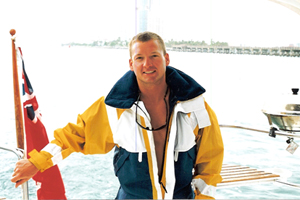 Mike Beach regularly fed Caribbean reef sharks in the Bahamas for his job as a dive tour guide, but in 1996, one feeding went horribly wrong. A shark sank its teeth into his calf. He was airlifted to Miami's Ryder Trauma Center where he endured two surgeries during a two-week stay. Rehabilitation took another six months. After a year, Beach had fully recovered and raced in a half Iron Man triathlon competition which he still does today.

Although his attack was caught on videotape and solicited by major daytime talk shows, Beach refused to release it. He has become a critic of shark feeding and believes that too much focus on shark attacks hurts conservation efforts. A master scuba diver and trainer, Beach advocates for sharks through several forums including his Miami Beach dive business, www.rjdiving.com, his Miami reef conservation group, www.reefguard.org, and also as a professor at the Rosenstiel School for Marine and Atmospheric Science at the University of Miami. Mike still enjoys diving with sharks in their natural habitats—without feeding them—and does so with his good friend and fellow shark bite survivor Kent Bonde. Together, they are working with the Pew Environment Group to conserve sharks.