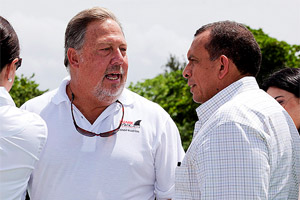 In 2000, triathlete Chuck Anderson was training 150 yards offshore in the Gulf of Mexico when an eight-foot bull shark lunged at him, attacking four times. The shark dragged Anderson toward the beach, slamming both of them onto a sandbar 20 feet from shore. Pinned by the shark and struggling to get free, Anderson ripped his right arm from its mouth, losing his forearm.

Anderson, a high school principal, returned to competition less than a year later, winning the Mullet Man triathlon. He continues to compete. He never blamed the shark and regularly makes trips to the ocean, which he loves. Anderson works with the Pew Environment Group because of his strong desire to educate people and spread the message that indiscriminate slaughtering of sharks will forever change our ocean for the worse. As a teacher and coach, he tells young people not to be scared, but to be educated. He feels this work helps him make sense of the attack.