Reasons to support a prohibition on retention by IATTC fisheries 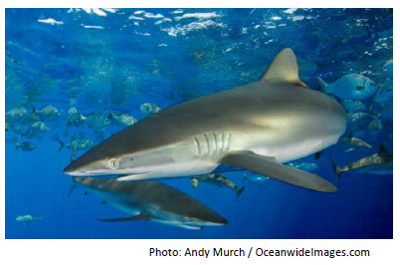 Silky sharks can be found in oceanic and coastal areas in tropical waters around the globe. They are both targeted and caught as bycatch and are often associated with fish aggregating devices (FADs). Fishing pressure from longline and purse seines targeting tuna and swordfish is high for this species, especially in the eastern Pacific Ocean. Silky shark fins are relatively high-valued and are the third most commonly traded species in the fin trade. Between half a million and one and a half million silky sharks are traded annually for their fins.

In the eastern Pacific Ocean, silky sharks are the most commonly caught species in the purse seine fishery. They are also regularly caught in the longline fishery. In the IATTC Shark Characteristics Sampling Program in 2000-2001, silky sharks accounted for more than 63 percent of the bycatch. Fishermen often refer to silky sharks by the common name “punta negra,” which has led to the misclassification of silky sharks as blacktips. While observers are capable of correctly identifying silky sharks, analysis has shown blacktip sharks in the offshore fishery are actually silky sharks, thus bycatch may be higher than what is recorded. Bycatch of silky sharks by purse seine vessels setting on floating objects has been found to occur most frequently north of 4°N and west of 100-105°W. Catch data shows the bycatch of silky sharks is decreasing in all three purse seine set types, but the floating-object sets have the greatest potential for impacting the sustainability of these sharks. Comparisons of catch per set for silky sharks from 1993-2004 suggests these sharks are in decline, thus raising concern for the future survival of this species.

The most recent IATTC analysis of available data from the purse seine fishery has shown catch rates have declined substantially in the Eastern Pacific, with silky sharks now virtually absent in the southern region (the IATTC Convention area found below the equator). Furthermore, data from the longline fisheries, both industrial and artisanal, are lacking but suggest declines may be even greater than currently reported, underscoring the need for strong conservation measures now to protect this species from further impacts.

The IATTC Commission should protect this vulnerable species by prohibiting the retention of silky sharks in all fisheries in the Convention area and requesting the immediate live release of any silky shark.