Sharks come in a variety of shapes and sizes. Some have narrow, pointed noses and powerful fins that propel them to high speeds, while others have a broad, flattened nose that probes the ocean floor. After 400 million years of evolution, there are now more than 350 species of sharks worldwide; at least 24 of these swim in the offshore waters of the Gulf of Mexico. 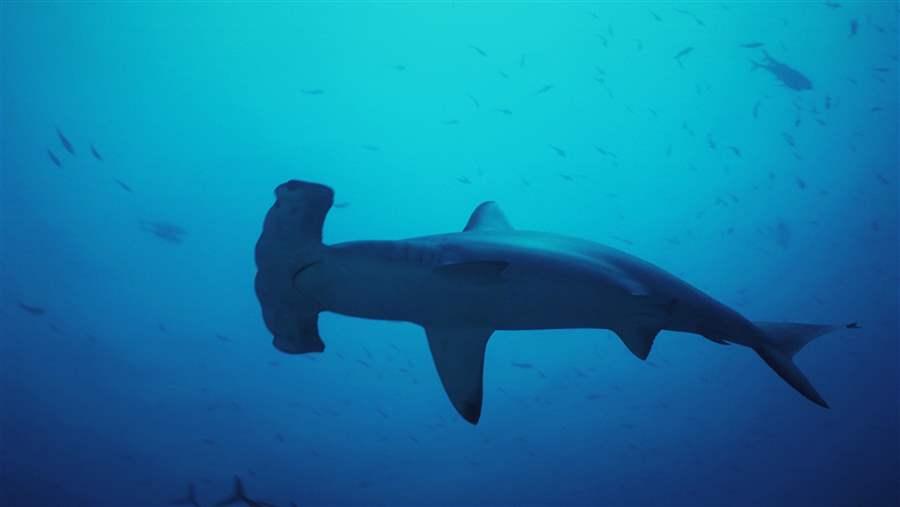 A wide array of physical adaptations allow sharks to survive in the Gulf. Powerful smell receptors help sharks trail injured marine animals from great distances. Sensory organs lining their prominent snouts can detect the movement of nearby prey even when it is not visible to the shark's sensitive eyes.

Sharks have a very low reproductive rate. Long-lived, they can take more than 18 years to reach sexual maturity. Species such as shortfin mako reproduce only once every three years and average 12.5 offspring per litter. Each newborn represents a significant investment of energy for female sharks that nourish an embryo until it has developed into a full-size pup. In contrast to fish that can lay millions of eggs, sharks depend on the long-term survival of a few offspring to maintain healthy populations.

As some of the top predators in the Gulf, sharks have few natural enemies. A significant threat to them, however, is indiscriminate surface longline fishing. This wasteful practice targets yellowfin tuna and swordfish, but it also catches approximately 24 species of sharks. Surface longlines frequently hook these opportunistic feeders when they investigate the bait or other marine animals, such as leatherback sea turtles, that are caught by the gear. These interactions with surface longlines often result in injury and death for sharks.

From 2007 through 2009, fishery observers witnessed 4,830 sharks hooked on Gulf surface longline gear. Approximately 94 percent of these sharks were thrown back into the ocean; of those, 36 percent were dead.

Overfishing, habitat loss and wasteful fishing gear such as surface longlines have resulted in substantial population declines for many shark species. According to the National Marine Fisheries Service, sandbar sharks have been depleted by as much as 71 percent from pre-fished levels. Additional studies have found declines of at least 80 percent for dusky sharks from pre-fished levels and approximately 70 percent for hammerhead sharks since 1981.

The continued use of wasteful surface longlines in the Gulf will not only further deplete biologically vulnerable shark species, but it may also harm ecosystems already strained by the Gulf oil spill disaster and decades of surface longline fishing.

The Pew Environment Group is working with commercial and recreational fishermen and other conservation groups to encourage state and federal agencies to phase out surface longline fishing for yellowfin tuna and swordfish in the Gulf of Mexico in favor of more selective gear. Shifting to less harmful equipment will promote the recovery of depleted shark populations, protect the resiliency of marine ecosystems, and keep Gulf fishermen in business. Restoration funds from the Deepwater Horizon oil spill could help pay for this gear transition program.

We need your support now. Please visit www.PewEnvironment.org/GulfTuna to tell Dr. Jane Lubchenco, administrator of the National Oceanic and Atmospheric Administration, to facilitate the transition from surface longlines to more selective fishing gears in the Gulf of Mexico.

To view citations, please download the PDF of this fact sheet.