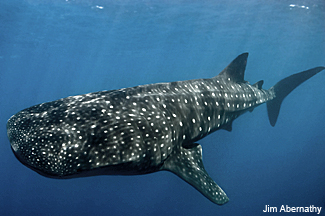 Whale sharks (Rhincodon typus) are highly vulnerable to fishing pressure because they are found in low abundance, are highly migratory, and are thought to reach reproductive maturity late in life. The International Union for Conservation of Nature Red List of Threatened Species has classified whale sharks as Vulnerable. They are protected by the Convention on International Trade in Endangered Species of Wild Flora and Fauna (CITES) as well as by the United Nations Environment Programme's Convention on Migratory Species.

In regions where whale sharks are known to aggregate, ecotourism has proven to be an extremely lucrative alternative to fishing. It has been estimated that whale shark tourism, mainly through recreational diving, is worth about US$47.5 million worldwide each year. In 2003, Belize reported an economic return of US$3.7 million from whale shark ecotourism alone, and it has been estimated that the economic value of a single whale shark in Belize is US$2.09 million over a shark's lifetime or $34,906 annually. Whale shark dives on the Ningaloo Reef in Australia brought in US$5.93 million in 2006, while it is projected that whale shark ecotourism in the Seychelles generates between US$2 million and US$5 million a year. Though it is not yet fully understood how interactions with tourists will affect these animals, whale shark tourism is a developing market in Latin American countries such as Mexico and Honduras, in southeastern Africa, and in the Maldives.

Whale sharks have been hunted for their meat, liver oil, fins, skin, and gills. Whale sharks' liver oil was traditionally used for water-proofing boat hulls, and though their fins are considered low quality for consumption, they are popular as “signboards” in restaurants in East Asia. For decades whale sharks (known as “tofu sharks”) were targeted by fishers, and Taiwan, Province of China operated the world's last large-scale legal whale shark fishery until 2007. An additional threat to whale sharks is their habitual association with schooling tuna, when these species come together to feed on a variety of baitfish. Purse seine fleets targeting tuna are known to encircle whale sharks to catch tuna in the vicinity. A 2010 analysis of whale shark and cetacean interactions with purse seine fisheries found that that purse seines set on whale sharks killed an estimated 60 sharks in 2009.

The whale shark is the largest fish on the planet, reaching lengths of 20 meters (around 66 feet) and weighing up to 34 tons. As one of only three species of shark that filter feed, whale sharks typically feed on a variety of planktonic and nektonic prey, small crustaceans, and schooling fishes, and occasionally small tuna and squid. Whale sharks are particularly unique in that they do not need to rely on forward motion for filtration but are also able to suction feed while hanging vertically in the water. Whale sharks are known to have certain seasonal feeding aggregations timed with the full moon near grouper spawning sites. Some of the largest known aggregations occur in Central America – particularly in the Caribbean near Mexico and Belize. Whale sharks are found across the globe in all tropical and warm, temperate seas except the Mediterranean. They typically range between latitudes 30°N and 35°S but have been sighted at latitudes as high as 41°N and 36.5°S. Whale sharks are known to inhabit both deep and shallow coastal waters and the lagoons of coral atolls and reefs. Recent developments in electronic and satellite tagging of whale sharks have found that whale sharks take long-distance migrations that can last over the course of many years. Tracked migrations included travels of over 2,000 km (about 1,243 miles) from northwest Australia towards Asia18 and a 13,000 km (about 8,078 miles) migration over months from the Gulf of California, Mexico to near Tonga. Of three sharks tagged in the Seychelles in 2001, one travelled west to Zanzibar, the second northwest to Somalia, and the third travelled over 5,000 km (about 3,107 miles) to the coast of Thailand.