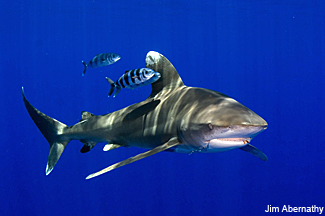 Oceanic whitetip sharks (Carcharhinus longimanus) were once extremely common and ranked as one of the three most abundant species of both oceanic sharks and large marine animals. However, due to intensive fishing the species is now listed as Vulnerable on the International Union for Conservation of Nature Red List of Threatened Species.

The size of oceanic whitetip populations is difficult to estimate because stock assessments have not been conducted and data are generally limited. However, U.S. pelagic longline surveys and observer data in the Gulf of Mexico estimated that this species has declined by 99 percent over four generations. In the Northwest Atlantic, an analysis of U.S. pelagic longline logbook data estimated declines of up to 70 percent. A similar analysis of pelagic longline surveys and observer data from the Pacific yielded a 90 percent decline in biomass. In the Inter-American Tropical Tuna Commission (IATTC) Shark Characteristics Sampling Program in 2000-2001, oceanic whitetips accounted for more than 20 percent of the bycatch. Observers are capable of correctly identifying oceanic whitetip sharks, but data has shown they are often coded as “other sharks,” suggesting bycatch may actually be higher than what has been recorded.

Important steps have been taken to protect this species in two of the world's regional fisheries management organizations. In 2010, the International Convention for the Conservation of Atlantic Tunas (ICCAT) put in place a ban on retaining or selling oceanic whitetip sharks. This measure mandates that any oceanic whitetip shark that is captured while fishing for tuna or other species managed by ICCAT must be released. ICCAT is responsible for the conservation of tunas and tuna-like species in the Atlantic Ocean and adjacent seas, including the Mediterranean. In 2011, IATTC put in place a zero retention measure for this species as well. The IATTC is responsible for managing tuna and tuna-like species in the Eastern Pacific. The oceanic whitetip shark was the first shark species to gain such consideration at a regional level in the Eastern Pacific.

Oceanic whitetips are routinely caught inadvertently in fishing nets and on longlines, a type of gear that can extend underwater up to 30 miles. Oceanic whitetip sharks are the second most commonly caught species in purse seine fisheries in the eastern Pacific Ocean. Although this species experiences a high catch-survival rate on longline fishing equipment, the high value and increasing demand for its fins means fishermen have little incentive to release the animals alive. Fins of this species have been valued at US$45 to US$85 per kilogram. There is evidence showing that, even when it is illegal to do so, fishermen often remove the fins at sea and dispose of the carcass overboard. Oceanic whitetip fins are easily identifiable by their white coloring, rounded shape, and large size. The oceanic whitetip is an oceanic shark, usually found far offshore in the open sea or around oceanic islands and areas with narrow continental shelves at depths less than 200m (656 feet). These sharks prefer waters ranging between 18 to 28°C (64 to 82°F) and have only occasionally been recorded inshore. The oceanic whitetip is one of the most widespread shark species, with their range spreading across entire oceans in tropical and subtropical waters. These sharks are usually found far offshore between about 30°N and 35°S. Studies have shown that oceanic whitetips are equally active during the day and night. Their diet consists mainly of bony fishes (including tunas, barracuda, white marlin, and swordfish) and cephalopods, and to a lesser extent, seabirds and marine mammals.